My Dearest October, I Wrote a Letter to You. 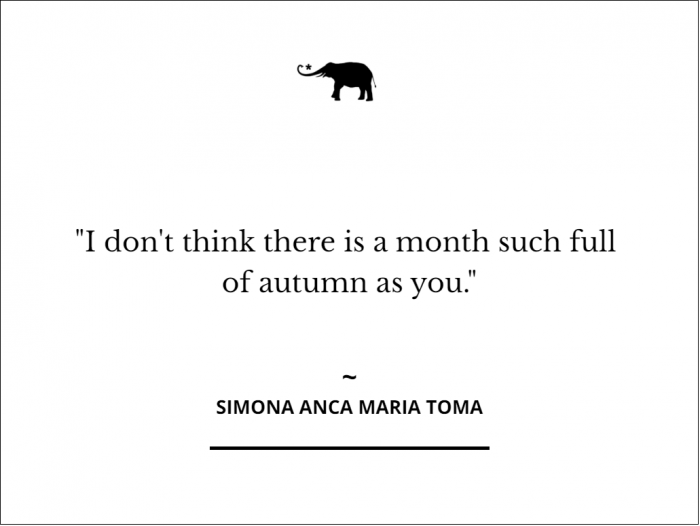 I’m thinking of a familiar quote, which I’m sure you hear quite often, but I still want to tell you how much I enjoy living in a world and a city where you exist in every year, always being just as charming.

Shame on me but I don’t remember ever writing to you, though my heart beats harder when I catch you passing through the streets, waltzing slowly a leaf toward the untouched paths.

I don’t think there is a month such full of autumn as you.

If September and November represent the subtle transition between seasons, being about a beginning and an end, during your time (which, somehow, passes much more smoothly) the most intense shades are drawed on the trees and the deepest states take place in people’s souls.

You, my dear October, are coloring my thoughts and sneak inside, drawing leaves instead of heart, lungs, and any other organs. Together with you, I myself become a season of transformation.

So let me tell you about an autumn day, spent in Bucharest under your changing sky.

Shortly before noon, I took a walk through this city, which sometimes I manage to look at with sincere affection; you should know that today that’s how I saw the city. I felt it; I loved it with all my heart. And I let it be my reason of joy.

We’ve met in front of the block, and from there we set off together on its streets bathed in a little gray, because I don’t know where you keep the gentle rays hidden (we’ll talk about that another time), but we easily warmed up looking at the only fully covered tree in yellow.

We saw some people in a hurry, an elderly lady patiently cleaning a few dry leaves from the fence, we looked for a small neighborhood café that two years ago was decorated with pumpkins and sun (now it had the shutters pulled) and then we got to the subway.

Did you know? In the subway it’s just like in life.

Some people go up while others go down, some stay for several stops, others realize they have gone in the wrong direction and run away until the doors close.

But it’s nice, from time to time, to take a seat as an observer and watch in silence.

I went down to Izvor station, thinking of continuing my role as an observer by walking on Regina Elisabeta Blvd., next to the old Cismigiu.

The people of Bucharest are of all kinds.

Ah, and the apparition of an elegant old men with a hat transported as if from the “little Paris” of long ago brings such a huge contrast with these young people too modern for my vision (which is not the most conclusive).

I stopped my walking next to Meron, a café with large windows (I love cafés that have seatings near huge windows) and I asked the city to mind it’s hustle and bustle while I catch my breath. Sometimes its atmosphere tires me terribly, but now I only needed a short break.

After a hot ginseng tea and some toast with hummus and baked pumpkin (delicious), we took the city by the arm and continued our way through cold drops to Rosetti Square (with a stop on Ivo Andric, for some cat-sitting).

Under the rain, everything gets hurried. The cars, noise, people, time, the whole of Bucharest turns into an urban chaos.

Although I tried to keep it close to me, to my calm steps, my curious eyes to observe everything…it took it before me, running away like crazy.

I think then I’ve lost it…until our next meeting, which I hope is all about joy (especially if it’s about Calea Victoriei). If not, it will be about a longing for greener and quieter places.

I would have liked to say that I took some long breaths of the city vibes in my long walk today, but wearing a mask most of the time, I only felt vague smells of tobacco near the smokers holding tight their cigarettes, and I rarely caught a trace of cold air mixed with traffic smells of gas.

I returned to the café, hidden by an umbrella full of colors, letting the city look at me through the window—if it had some patience left.

I also detached myself from the role of observer; I gathered my thoughts and let them turn yellow like the luminous logo at the entrance. I warmed my autumn nerves with a cappuccino sweetened with oat milk and I delighted my taste buds with a flavored bowl and a chocolate brownie.

Toward the end of the evening, I found myself in a new state: grateful for this full day and feeling a little lighter, as if I had freed myself from a weight I did not know I was carrying.

My dearest October, maybe I should have written to you earlier.

PS. Please be gentle and bring us some sunny days. 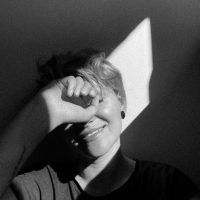 Simona Anca Maria Toma is a seeker of words with a b&w soul, photographer & radio storyteller. But she’s most fascinated with words, those are pure magic for he… Read full bio