Why we Need to Get Clear on (& Honor) Non-Negotiables in Relationships.

Everything had started off so well.

I had finally found someone to lead me out of the misery of middle-aged singledom.

She had it all: a flourishing career, a great family, real conversation, read the NY Times, did all the same mountain sports. Hell, her ass was hard as a rock, and she drove a Porsche. I had found my unicorn.

We had only been on a few dates, but the connection was deep. We’d spend three-hour dinners exploring each other’s lives, as we explored each other’s bodies. She was a single mother who had raised her child on her own. She had survived a serious bike accident that gave her a new gratitude and lust for life. I was a divorced 40-year-old who had taken a few years to piece myself back together.

We had both endured adversity and come out stronger and clearer on who we were and what we wanted. We were both ambitious, driven by similar values, yet equally jaded. We challenged each other and shared the same dark humor. The days of scrolling through depressing dating apps appeared to be over.

At the end of a long week, we met at my place for a drink before dinner. She looked incredible. Brown heeled boots, signature black leather pants, and a confidence that was magnetic. She had spent the day closing nine-figure real estate deals and was in the mood to celebrate. I just had to hang on for the ride.

We managed to pull ourselves off each other and into an Uber. By the time we got to the restaurant, the driver wanted to join our evening. We were on fire.

A couple margaritas and an average appetizer later, she hit me with the question: “So, do you want kids?” I was expecting the question at some point, but it still caught me off guard.

It had only been after my divorce that I had felt the pull to be a father. But lately the desire had fizzled. I was tired—tired of COVID-19, tired of the isolation, tired of sh*tty dates; I was tired of having to continually find the motivation to move forward as a party of one.

I had started to entertain the thought that maybe I didn’t need kids of my own. Maybe that was just my ego talking. Maybe I could find fulfillment helping to raise her child. But was it what I really wanted?

I had been talking in circles, trying to arrive at my own truth. She had made it clear that she didn’t want more kids. She had been pregnant, given birth, and raised her daughter alongside an absent partner. The radiance of her pregnancy appreciated by no one. It was enough trauma for one lifetime. But her question had more on the line than just kids. We were really talking about our future.

She looked deep into my eyes from across the table. I had started the dinner on her side—our bodies glued together—only to be banished to my own side by the waiter. Something about physical distancing from the table beside us. I had reluctantly obliged. Now here we were, eyes locked, hands entwined, fully connected.

She saw it in my eyes before I even knew. Her head pulled back an inch, her smile dropped, her shoulders softened, her eyes glistened with moisture. She could see what I couldn’t: that I deeply want to be a father. And with that clarity came the hard truth: we had no future together. I blinked heavily and tilted my head to the side, trying to hide my own tears. The clarity was good, but it hurt like hell. The moment both devastating and beautiful.

I snuck back to her side of the table, and we finished our dinner. The waiter jokingly called us “troublemakers.” Despite the breakthrough, we decided going forward to casually keep hanging out, because of the deep connection. (Not to mention the sex…and the Porsche.) It seemed like a good enough plan. Hell, maybe one of us would change our mind. Her mom was already on board: “What’s one more to squeeze out?!” she had texted later. Either way, it was a better alternative than a return to single life and starting from scratch.

The following week I shared the story with my coach. We had only been working together a couple weeks. After a summer of being a delinquent, I was ready to resume my seemingly perpetual journey of personal development to seek the elusive peace. I was tired of the self-induced suffering. I had committed to taking the fall to reprogram a deep-rooted belief that I was not worthy of love. We had a lot of work to do.

I had expected my coach to be proud that I had identified my relationship non-negotiables, our topic from the previous week. I was wrong.

“You see what you’re doing here, don’t you?”

Obviously, I did not. As much as I had grown over the previous years, I still had blind spots. Big ones.

“You’re repeating the same patterns. By still seeing her, you’re playing it safe, settling for something you don’t really want. You know it won’t work out, so you don’t fully open your heart. So, when it ends, it will hurt less.”

She was right. I had literally spent the entire summer doing the same damn thing: wasting endless amounts of time and energy on a different woman who wasn’t right for me. I was addicted to the suffering; it was what I could control. But by focusing energy in the wrong direction I was preventing what I wanted from coming in.

By not having to fully open my heart, I could protect myself from being hurt. Again.

But my closed heart was also blocking love from arriving.

I agreed with my coach that I would cut it off…after one more date with my Porsche babe. Getting clear on our non-negotiables had been hard. What would have been harder? Not having the conversation at all.

As hard as the experience was, it was good to get that ultimate clarity on what I wanted.

The Universe works on clarity and vibration. If you’re not clear on what you really want, you’ll for sure never get it.

And the best way to keep your vibes high is to live courageously with an open heart. 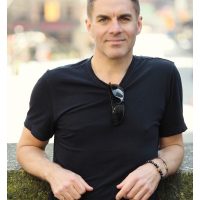 Michael Tranmer is the author of satori ananda – awaken to happiness, a transformational memoir about his conscious awakening after the end of his marriage. satori ananda ha… Read full bio