Leaders of the World, we Need a New Gom Jabbar.

I’ve loved Frank Herbert’s novel Dune ever since I first read it over 50 years ago.

In fact, I’m such a fan I even enjoyed the first movie, flawed as it was. The new one, however, is absolutely awesome, and so true to the book’s vision.

Early in the newly released movie from director and Herbert fan, Denis Villeneuve, is a scene where an ancient priestess (known as a Bene Gesserit witch), holds a poisoned needle to the neck of the Duke’s teenage son. She tells him to insert his hand into a box, and that if he removes his hand, she will plunge the poisoned needle into his neck and kill him instantly. She then proceeds to torture him brutally, by continuously increasing the pain delivered by her box to his hand—going well past what she has ever done to anyone in the past.

Okay, so while she clearly seems like a serial child molester, she’s apparently not. (Or is she?) Under the guise of some sort of quasi-religious orthodoxy, she gets to regularly inflict great pain on young people, mostly girls, to see if they flinch. If they flinch or move at all then they die, and if they don’t, they live on to be tortured again another day. Such fun!

The test is called the “Gom Jabbar,” and it is intended to determine whether the person being tested is “an animal or a human.” An animal, having no broader awareness or ability to understand non-immediate consequences, will immediately pull away from the pain, and so, in this test would die. I get that. My dog will sometimes scratch his ear past the point where it hurts and start crying while still trying to scratch. He doesn’t know how to stop unless I tell him.

Humans are supposedly different, although that is open to serious question for many. An individual’s self-awareness is supposed to be stronger than their basic instinct, letting them make better decisions. If their awareness of the Gom Jabbar’s presence, and the consequences of movement are strong enough then it would override their instinct to withdraw from the almost overwhelming pain of the test. This is supposed to prove that they are human.

Perhaps this explains why women have second or third children after going through the pain of childbirth the first time. Women are generally more human than their male counterparts who seem more driven by animal instincts—I’m glad I’ve never had to give birth.

In the context of Dune, the Gom Jabbar’s test of a person’s humanity is of central importance, and it tests much more than just their self-control. It tests their stamina, their willpower, and ultimately their suitability to lead. In Dune, it tells us a great deal about this unique young man and his potential, but does it really tell us that he is or will be a fit ruler?

If you’ve read the book(s) then you know that Paul Atreides goes on to find a galaxy-spanning dynasty and unleashes a pogrom that kills billions of people. He proves over and over again that he is able to ignore his immediate impulses and stay true to his grand vision for a new galactic order, regardless of his personal suffering. Paul’s decisions and actions pose again the question of whether or not he is truly “human” and whether the Gom Jabbar was a valid test.

In our world as well, too many of our rulers would easily pass the witch’s Gom Jabbar, willingly suffering short-term pain for long-term gain. They are often not, however, what we think of as “good people,” good humans, or even good leaders. He and they are just another kind of dangerous animal.

A true test of one’s humanness, a true Gom Jabbar, must test much more than someone’s ability to live in their head and ignore their body’s instincts. A true human, particularly one fit to lead, must be able to equally live in and decide from their heart. A broader vision of a grand future that is devoid of human love and caring is a cold and empty vision, and steering a course toward that takes them and us only to a wasteland of despair.

Perhaps the test could have a second part? That second test might include testing one’s willingness to make a personal sacrifice to benefit another. Imagine if after having the poisoned needle withdrawn and being able to remove their now pain-free hand from the box, they are presented with a second test—to see someone being tortured in front of them for no known reason, and be told that the only way to stop the torture was to put their own hand back in the box. Perhaps the one being tortured is someone they know and love, but let’s make it a true test of a leader’s heart, and let the person they are saving be a complete stranger, with an unknown history or personality. Would Paul, after suffering the almost unbearable agony of the box, willingly choose to put his hand back in the box to save a random citizen? Would you?

In Dune, even with his spice-induced visions of the future, Paul was left uncertain at times as to what the consequences of his actions might be—but it didn’t stop him. Certain in his own mind that he was choosing the best course for all, he ignored the suffering he created, and killed countless people for the “greater good.” Suffering is inevitable when a leader only leads from their head.

The future is uncertain for everyone and no one has a crystal ball, spice induced or not. We do need leaders who are strong, intelligent, and mindful, with the ability to create and hold a grand vision. They must pass that first half of the Gom Jabbar. But, we also need them to be able to equally lead from their hearts and pass the second Gom Jabbar that determines true humanity. A leader that fails this test should not be followed. Only by joining both sides of our humanity can they, and we, move confidently toward a grand future.

We need a new Gom Jabbar. 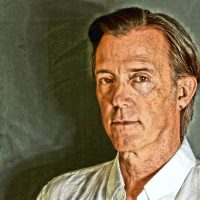 David Anderson, the Yogi-CIO, has over 40 years as a professional and senior executive in a broad range of fields.  Part hard-headed engineer, part artist and poet, part teac… Read full bio