When the Student is Ready, the Audiobook will Appear. 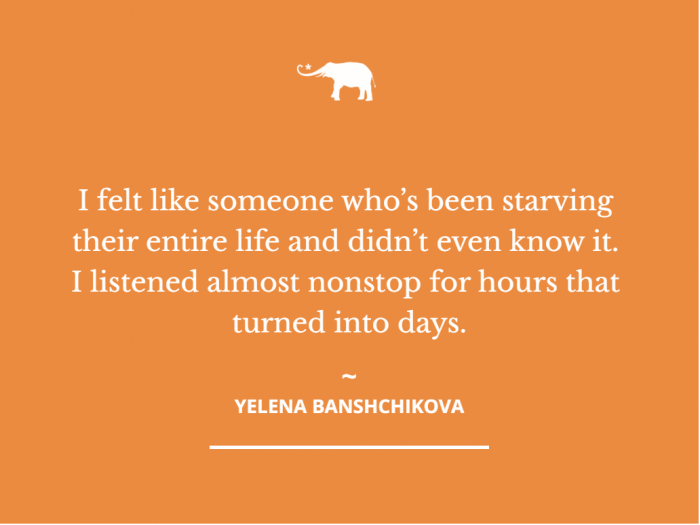 Sometimes we don’t even realize that we’re ready for something big.

I had no idea how ready I was. In the fall of 2011, I was riding the Q train from Brooklyn to Manhattan with a friend, sipping on vodka and cranberry juice that I had mixed at home and poured into a water bottle. We were pregaming—that’s when you drink before you go out to drink some more—and I was happily oblivious to the fact that my life was about to change.

We were meeting a couple of friends for a party at a bar, and they were already outside by the time we got there. As we exchanged hellos and stood around chatting, I noticed one of them wasn’t having a cigarette with the rest of us. As it turned out, she had quit smoking, drinking, and became a vegetarian, all in a relatively short span of time since I last saw her.

I was impressed, but what intrigued me most was her glow and that she was practically floating a few inches above the ground. Not literally, of course, but she seemed so happy and light-hearted that I felt I absolutely needed to know what happened to her. She was vague when I asked and said only that she stumbled across some life-changing information, offering to send me a few links if I was interested. I was surprised at the speed and velocity of the “yes” that went flying out of my mouth.

As promised, the very next day I received an email with links to Eckhart Tolle’s audiobooks: A New Earth: Awakening to Your Life’s Purpose, The Power of Now, and another link that was broken. I swallowed the audiobooks in a matter of days. When Tolle spoke, his words seemed to drop straight down into the deepest recesses of my consciousness. Suddenly it felt as though I was seeing my world from a distance and instead of feeling familiar, everything and everyone looked murky and strange.

A few weeks later, my then-boyfriend and I broke up, and I found myself back home sitting in my bathroom smoking a cigarette, thinking about what had just happened. Just as I was starting to plan another round of sex, drugs, and rock ’n roll to numb out the pain, I had a sudden, jarring flash of insight. It was almost like watching a movie of myself engaging in repetitive cycles of toxic and self-destructive behavior: find a relationship to lose myself in, sabotage the sh*t out of it, endure the agony of yet another breakup, go on a round of self-destructive acting out to numb myself out. Repeat.

This time, something inside me suddenly jerked awake and proclaimed an emphatic “no.” Deep inside myself, I knew I couldn’t go through this cycle again. I didn’t want to. Something had to change.

I went to my computer, opened my email, and tried that broken link again. The link was still broken, so I copied and pasted it into a browser that took me to a page with an embedded audio player. I pressed play. The rest is history.

There were dozens of audio lectures by Russian-speaking Krishna devotees who spoke about consciousness, spirituality, Vedanta philosophy (ancient teachings about our true divine nature), and the yoga of devotion. It was exactly what I needed to hear when I needed to hear it. I felt like someone who’s been starving their entire life and didn’t even know it. I listened almost nonstop for hours that turned into days.

One of the lectures about karma hit me like a slap in the face and I experience the most intense flash of self-awareness. I saw a moving image of myself in my mind’s eye, lost in fantasy, nervously smoking a cigarette, thinking compulsively, and chasing mirages. It was a visceral experience that stopped me dead in my tracks. 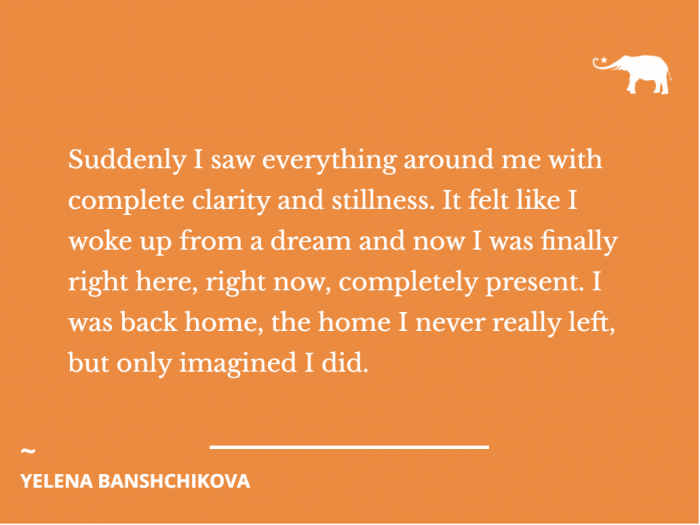 I felt goosebumps all over my arms and the hair on the back of my neck stood up. Suddenly I saw everything around me with complete clarity and stillness. It felt like I woke up from a dream and now I was finally right here, right now, completely present. I was back home, the home I never really left, but only imagined I did.

I quit smoking and drinking immediately. I started practicing yoga and became a vegetarian. I went on a 10-day silent meditation retreat, learned Reiki, and started practicing it immediately on a volunteer basis for a non-profit. I moved to an Ashram for a year and became a yoga teacher, and since have gone on spiritual pilgrimages that took me to the other end of the world. In short, my life has never been the same.

I’ve oscillated and gone back to my old habits several times, but never with the same fervor. I eventually found a place of balance where I am now able to have an alcoholic drink or even smoke a cigarette if I feel like it, but the strength of my awareness prevents me from ever succumbing to these addictions the same way I once did. Now I am capable of stopping myself and not overdoing it. I don’t fear alcohol or cigarettes, or drugs, or shopping, or any other addiction anymore. Well, I’m still working on love addiction, but that’s a work in progress and a story for another time.

I am not saying I’ve reached some permanent place of guaranteed safety and that I can never fall prey to addiction ever again. How can anyone say that with any real degree of certainty? The truth is that they can’t. There are no guarantees, but we can heal and we can recover, everyone in our own time and in our own way. There are some who cannot ever touch alcohol or drugs or cigarettes again, and so they shouldn’t. Some don’t even want to. I sometimes do. There is no one right way—but there is a way out.

The path to healing is arduous and different for every one of us, but there is a path and we never know when we’ll be in the right place at the right time. There is nothing in the world that can convince me that my meeting up with that particular person on that particular night was just a random occurrence.

Sometimes we don’t even realize that we’re ready for something big. That it could be waiting for us right around the corner. That healing and recovery are possible, and that a whole new life can be ours. 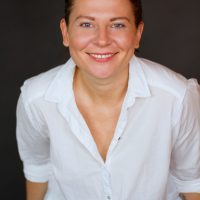 Yelena Banshchikova is a freelance writer, copy editor, and proofreader. She is also a Reiki Master and creator of HeartSpace—a fully remote energy-healing practice. She is … Read full bio