A lawsuit filed on behalf of two survivors of the deadly Oxford High School shooting in Michigan accuses the school district and a number of its employees of not doing enough to prevent the attack, despite multiple red flags.https://t.co/MScRmQtDR4

It’s a ritual for me almost every day.

I go into the bathroom in my home, and I have to remove the toilet paper roll from the dispenser and turn it so the paper is dispensing from the top.

This leads to a tirade of profanity that screams in my head, and the fleeting thought to get an art print of the patent for this simple item in just about every home.

As tempting as it is, I continually leave the battle of the bath tissue in my head instead of flying out of my mouth. It’s small, arguably petty, and even if it leaves me with movie-like fantasy scenes running through my head of going all “Psycho” shower scene on the guilty parties, the police haven’t been called to our home to cart me away from a blood-soaked home.

It is the little things that stick with us, right? Your boss could be telling you that your job description has doubled, but your mind is darting back to the little old lady who kept banging her grocery cart into the back of your leg last night.

If you’re paying attention, you see that I’m not showing any social media links here—yet. Sure, I will eventually restart on them, but I am taking hiatus now because it’s toxic out there. If they’d restrict content to sharing milestones with family and friends, cute pet tricks, and uplifting memes, the world would be a better place.

Goes without saying, no one should be a thoughtless person who says toxic things from behind a keyboard, a fake name, and a profile picture that isn’t a selfie. But people also shouldn’t thoughtlessly dismiss what someone is saying because they hear a buzzword that makes them assume something other than what a person is really trying to say.

Case in point, I have found myself biting my tongue lately about little things like the Kyle Rittenhouse verdict and the Michigan school shooter’s parents getting charged for involuntary manslaughter. I live in a town that is definitely majority pro-gun, and I was raised around them. But I think the Rittenhouse verdict was wrong, and the parents in Michigan should be charged.

There’s no room for nuance these days, let alone a fair dose of common sense. Try letting your fingers do the walking on Google and search “age restrictions for guns by state” once. No, there isn’t a clear-cut law out there to keep kids from legally obtaining weapons, and yes, that is a problem.

My contention remains that Rittenhouse wouldn’t have needed to protect himself if he hadn’t been parading around with a long gun in plain sight. Sure, he might have gotten pushed around if he was silly enough to get into a verbal confrontation with protestors, but unless he really got in their faces (stupid idea in the first place), at worst, he might have needed some first aid.

Carrying the weapon openly created the need to defend himself, and a 17-year-old shouldn’t be allowed to carry a weapon in public without adult supervision. The kid can’t legally buy a pack of cigarettes, but it’s fine for him to go walking around with a gun? Can we reduce the smoking age and increase the gun age, please? I mean if the line in the sand is about taking away rights from kids, better to let them smoke than carry around lethal weapons, right?

And that brings us to the Michigan parents who apparently bought the handgun for their precious, little angel. You know, the one who was causing them to end up visiting school officials over bloody drawings and writing about killing people.

Folks, this has reached the point of the idiot labels. You know, the stupid tags on hair dryer cords warning you against using the damn things in the bathtub. All guns need warning labels: “Do not allow children, especially children with anger issues or fantasies about killing people, to have this weapon.”

These cases are why gun rights people and kids who legitimately want to hunt and engage in shooting sports safely might not be able to have nice things anymore.

But that’s assuming that we don’t conflate the issues yet again. Yes, race was involved in one of these cases, and mental health in the other. For years, when mass shootings have happened, my mantra has been “two types of people ignore gun laws: criminals and crazy people.”

Now, thanks to Rittenhouse and the Michigan shooter with the terrible parents, I have to add “kids should not have weapons unless they are being supervised by responsible adults.” I think that should cover the legitimate reasons—hunting and shooting sports—that any child under the age of at least 18 should have for handling weapons.

No, I’m not falling into the “teach your kids about how to use guns if you have them in your house” game because gun safety for kids in the house is simple. “Do not touch weapons in the house, ever, period, full stop.”

Reality check is that your kid is most likely to be overpowered by a felon who breaks into your house, which means your kid will be shot with your gun. Otherwise, your kid is going to be tempted to show off your “toy” to friends, and that rarely ends well. Keep it to kids learning to shoot at a range that permits it, out in the woods hunting, or best of all with an organization like 4H that happens to have a “competitive shooting” group with classes.

We’re doing it wrong because like so many things, we paid more attention to details instead of the root of the problem. While the NRA and other gun rights groups will undoubtedly fight it, screaming for a nationwide, solid age limit for purchasing and carrying weapons is definitely a logical response to both these cases.

Honestly, I say let the gun rights people have the rope to hang themselves—letting kids have guns without responsible adult supervision is the epitome of “you’re doing it wrong.” 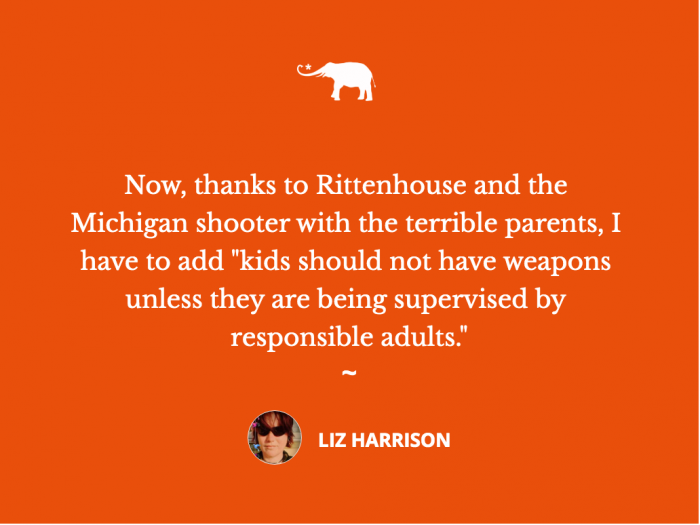 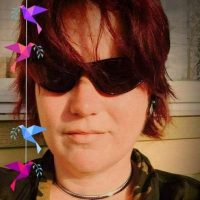 Liz Harrison died before she even started living, so it’s sort of like reading the ending of the book first? Ok, maybe not. Here, look for Liz’s quirky, irreverent… Read full bio