Kyle Rittenhouse, who fatally shot two men and wounded another in Kenosha, Wisconsin last year, was found not guilty of homicide and four other charges on Friday. https://t.co/u3ESHXMlHB pic.twitter.com/YtcQTG2fJU

I was shocked but not surprised at the verdict in the trial of a man who gunned down three people he claimed were endangering his life.

I was at work, seeing clients, when my son texted me with the news.

I had to maintain my composure until I could take a break between psychotherapy clients. I am not writing this in the role of a therapist, attempting to diagnose the then 17-year-old who decided that he needed to ride to the rescue and protect the property of merchants in Kenosha, Wisconsin, in the midst of a Black Lives Matter protest, but a concerned citizen who identifies as a social justice advocate and activist.

If I could see into his mind, I imagine he fancied himself a hero and patriot going to the rescue. In the part of the trial I did see, he was being questioned about his EMT and firefighter training. My thought was that if he went there in that capacity, that he claimed “to help people,” he failed miserably. In one photo, I saw that he was wearing blue latex gloves as he was clutching his AR-15 that was a straw purchase via an adult friend named Dominick Black, since although Wisconsin is an open carry state, Rittenhouse was underage and thus couldn’t legitimately purchase that piece

Prior to the events that led to the outcome for which he was on trial, he was interviewed by a conservative outlet and expressed his rationale for taking up arms.

“So people are getting injured, and our job is to protect this business,” he professed. “And part of my job is to also help people. If there is somebody hurt, I’m running into harm’s way. That’s why I have my rifle—because I can protect myself, obviously. But I also have my med kit.”

The outcome was that this white man shot three other white men, Gaige Grosskreutz, Anthony Huber and Joseph Rosenbaum, killing two of them as they were protesting the police shooting of Jacob Blake.

If he indeed has his med kit, with the intention to heal and save lives, why didn’t he use it instead of a weapon that snuffs out life? 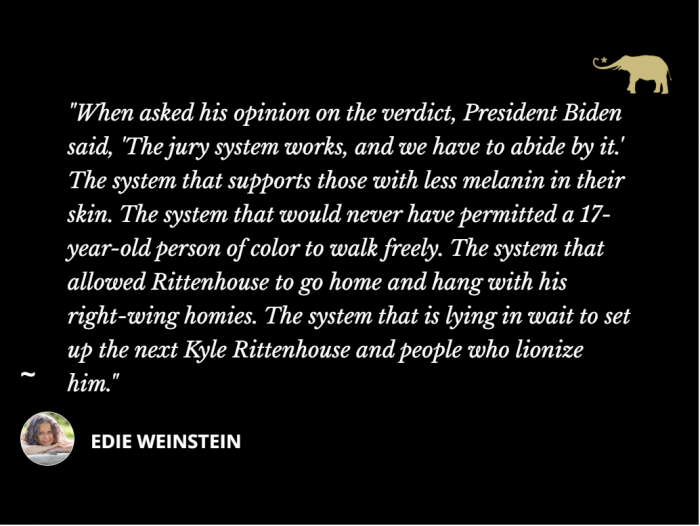 What is stunning is that even in the midst of the chaos that ensued on August 25th, no one else was killed during the protests. The police handed him water as he strolled through the streets and some turned a blind eye and told him to go home when he admitted to shooting and killing.

These were the charges:

The instructions, which were laid out in 36 pages, came down to this:

“The state must prove by evidence which satisfies you beyond a reasonable doubt that the defendant did not act lawfully in self-defense.”

Of course, Rittenhouse or anyone in his position would claim that he believed he was in danger. The jury wasn’t instructed to consider what a reasonable person would do. Only what he would do. His performance on the stand, quivering lip, face contorted, with sobbing that ensued and in a contrived move, so it seemed, had him glancing over to see if the jury was watching. Clearly, they were. He was a teenager who didn’t belong there in those streets. He was an adolescent in overwhelm mode who acted aggressively.

After four days of jury deliberation, in response to every one of them were the words, “not guilty.”

The verdict is appalling. If he hadn’t gone there, gun brandished, he wouldn’t have been in a position to kill anyone. It reminds me of the person who robs a store and kills the shopkeeper. The excuse offered is, “If he had only given me the money, I wouldn’t have had to shoot him.”

Had he not been practically handed the verdict by a biased, inept judge who did everything he could get away with to undermine the prosecution and make a mockery out of the judicial system, it is likely that Rittenhouse would be behind bars right now. The fix was in when he refused to have those Rittenhouse shot referred to as “victims,” but rather, as “rioters” and “looters.”

Who lets the accused choose the jury, albeit, randomly?

The verdict, even if it was within the bounds of the laws as they were written, was more than a dog whistle, but a clarion call to give the all-clear for white supremacists to invoke vigilante justice. It celebrates political violence.

Kyle Rittenhouse will become the darling of the alt-right and a poster child for those who worship their 2nd amendment rights and the privilege that white men hold. He posed for photos in a Wisconsin bar with members of the far-right extremist group, The Proud Boys, after he made bail wearing a t-shirt with the words “Free as F*ck” emblazoned on it.

What enabled him to raise enough money to walk freely until the trial was conservative fundraising. Matt Gaetz and Paul Gosar are Twitter fighting over him to invite him to be a congressional intern. He is being embraced as a hero and heralded as a role model.

What is the long-term implication for others who think it is acceptable to bring weaponry to rallies, vigils, and protests? For the past few years, I have attended peaceful protests in my neighboring town of Doylestown, Pennsylvania. They are family-friendly events. I shudder to think of what would happen if someone brought a gun with the intent to do violence. Pennsylvania is an open-carry state, so it is possible.

I’m assuming, by way of calling for peace, when asked his opinion on the verdict, President Biden said, “The jury system works, and we have to abide by it.” The system that supports those with less melanin in their skin. The system that would never have permitted a 17-year-old person of color to walk freely. The system that allowed Rittenhouse to go home and hang with his right-wing homies. The system that is lying in wait to set up the next Kyle Rittenhouse and people who lionize him.

His defense attorney, Mark Richards, who was interviewed by Chris Cuomo, said Rittenhouse wished he “didn’t have to do what he did,” but had no duty to retreat. Richards painted him as a hero who “went around seeking to help people.”

Related to this article: