A Life Lesson from the Boston Marathon: Community Helps us Cross the Finish Line. 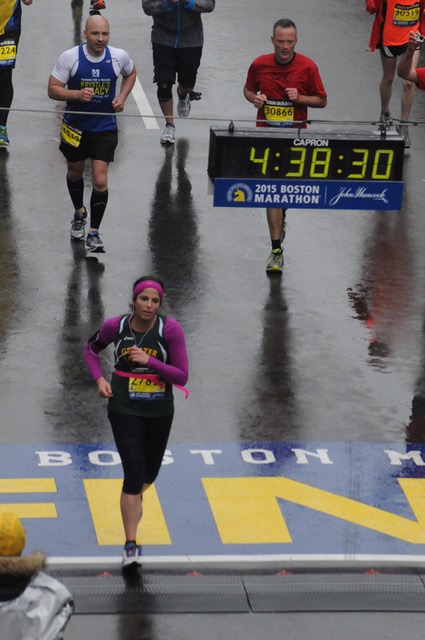 Sometimes we push others away when we’re going through a hard time.

Part of it could be instinctual; we are animals after all, and when an animal is injured or hurt, it retreats into the woods.

The other part may be self-preservation. We don’t want others to see us at our weakest and most vulnerable.

While it’s understandable and normal to need solo time for a little while, being isolated is not meant to be a permanent state of being.

I had a solid four hours to think about this when I ran the Boston Marathon. “Are we really pack animals?” “Can we survive alone?” “Why do we need a community anyway?” All these thoughts danced in my head like the rain drops bouncing off the pavement.

At the starting line, I couldn’t wait to break away from the rest of the runners in my corral. We were shoulder to shoulder. It was difficult to picture it any other way and easy to fantasize about being out of everyone else’s energy.

I couldn’t wait to be out there on my own, keeping my own pace, only thinking about my own stride.

A fog had settled into the final miles of the Boston Marathon course. It was hovering around 40 degrees and it had been raining for hours.

I was the only one. I couldn’t see anyone ahead of me or behind me. “How could I have started in my corral with 10,000 other people and be entirely alone now?” I thought to myself. It was too stark a contrast…first too many people and now no one. I started re-evaluating my earlier thoughts and how I had been living my life the past six months. “Did I truly want to be alone forever?”

Heartbreak Hill was behind me, but I was quickly learning what experienced Boston Marathon runners have said, “It’s the downhill that really gets you toward the end.”

“Don’t stop now b*tch, you got this!” A woman with long flowing dark curls that stood out against her bright yellow rain jacket yelled to me.

I was somewhere in Brookline, past Coolidge Corner, in a place where fans are scarce because the T runs through the middle of the street. I had stopped to stretch my calves on the safety fencing that was put up to keep people off the course.

Seeing the safety fencing, I flashed back to two years earlier to the images on the news after the bombing, the fence in pieces, debris scattered in the road.

“This is why I’m here right now. I reminded myself,” as tears started to flood my eyes. I vowed to do this because of what happened. Because of my friends. Because of the impact on the whole community, and now here I was wishing I was alone…only to realize I needed people too.

It was as if the universe had dropped that woman there to remind me that I wasn’t all alone after all. Her words instantly comforted me.

I looked up at this beautiful woman standing there in her bright yellow rain jacket, umbrella overhead, and I nodded, then picked it back up to a jog.

The marathon training that year for me was therapy. It was time alone. Only on two long practice runs did I allow any company. I was processing so many life changes like my divorce and being a single mom. I felt like I had to do it alone.

But now that I was out in the open, just the sound of my own footsteps hitting the pavement with no background noise, I started to feel like the part of my journey I was meant to complete on my own was closing.

As the next mile under my sneakers disappeared, I could see the famous Citgo sign near Fenway. I couldn’t help laughing out loud. What a great place for this amazing stranger to perch up and just yell words of encouragement to people.

I crossed the finish line and walked over to the Hancock Tower to take shelter from the rain. As I took my phone off my armband, I saw a text message from a friend with a picture attached. She had watched me on TV and took a picture of me crossing the finish line. No matter how hard I had tried to push everyone away…she was still there, watching, waiting until I was ready.

The following year, I didn’t run the marathon. I drove in and walked to the lonely spot in Brookline where there are barely any fans to post up for part of the day.

I tracked all my runner friends online so I knew when they would be approaching. I shouted to strangers. I gave high fives. I wanted to be that person for someone else when they needed it so badly.

Because in the end, people need people. We’re social creatures. And affirmations and encouragement are what fuel us. 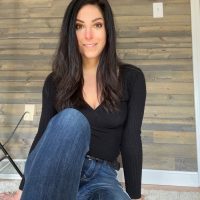 Erika loves writing real articles that are meaningful and of benefit to others. She enjoys writing about real-life experiences to inspire people. Erika is a mom, step-mom, and… Read full bio