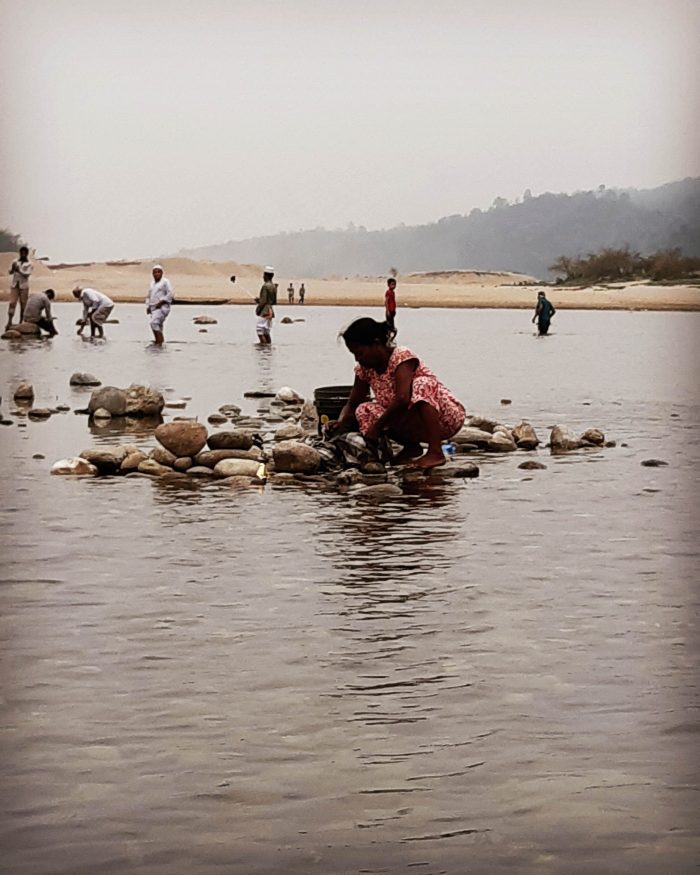 “Look at the other side of the river! It’s Bangladesh,” our driver and guide said in delight, pointing at a piece of land across the river that looked no different to where we stood.

“At night, you will get to see bright lights glimmer across the river bank!” He said it so excitedly that I wondered if Bangladesh had special lights.

Our country was divided in 1947. Those who were once Indians were no longer. It made no sense—we looked more or less the same, we practiced the same religions, we loved the same sport, and we spoke the same language. Despite that, they were no longer Indians.

And here we were, in 2018, at the border between two nations. Here we were at the banks of the river that flows from India into Bangladesh, and ritually floods the country each monsoon.

“Where’s the border?” I asked our driver when I noticed two armed Indian border security patrollers standing atop a hill, watching us from a guard post. The security post overlooked the river embankment.

“No, I don’t. There are rocks everywhere.”

I wanted to take pictures, so I cut across the stony embankment to get to the far end of the riverbank. I passed by a group of people, some casually strolling and others either checking their phones or playing games on them. Two were peddling street food, and a lady was vigorously washing clothes on the river bank.

I didn’t go far when I heard a faint whistle from the hill top. I ignored the whistle and continued walking. But the whistling grew louder and more insistent.

So I looked behind—people were staring at me, and from the distance of the hill, a border patroller was motioning me to return.

I had accidentally crossed the border.

And as indistinct as the line was, I didn’t know how far I should retrace my steps to return to “India.” So for a few seconds, I stood in uncomfortable suspense. And in those few seconds, I took pride in my rebellious nature. I was now a law breaker.

I read about the inane 1947 partition and the 1972 civil war in history books. I have had friends whose grandparents were forced out of their homes during the partition or fled the civil strife. I know that each year, Bangladesh is ravaged by floods; floods that make its fields untenable, its land uninhabitable, and its people driven into deeper poverty.

As I hesitated, a vendor interrupted and asked me if I would like to buy red-spiced “bogori,” otherwise known as Indian berry.

As a kid, I loved spiced Indian berry so much that I would save my pocket money to buy it from the street vendor outside the school gate. He would wrap the berries in an old newspaper, and my defiant self would smuggle the package into the classroom. This, despite the school’s strict rules not to bring food or eat inside classrooms.

In no-man’s-land, I found a childhood joy. “Is that bogori?” I asked, and just as he confirmed, a patroller with a gun in hand came plodding toward me. I’d not been aware that the whistling had worsened and was directed at me.

It’s then when I found out that the vendor was Bangladeshi.

“Am I not allowed to buy from him?” I asked the approaching patroller. In a good-humoured countenance, he shook his head no and then walked right past, saying not a word to either of us. He continued walking some distance from us and then I understood that the uniformed man was giving me leeway to finish what I had set out to do.

“How much?” I asked hurriedly, determined to smuggle a box of Bangladeshi bogori into India.

The bold vendor quoted a ridiculously high amount, but I didn’t care. I was jubilant; I was willing to pay anything for the special treat and just as eager to buy it specifically from the man across the border.

But the truth—which I realised later as I do most truths—was more twisted than my eagerness to eat those spiced Indian berries.

So I am glad that I could be there, amongst people who could have been Indians. I am glad I could buy my favourite spiced berries from a man who is no longer Indian but is still one of us.

For the people from either side of the border: there is no border. There never was. There are only rocks, and the crystal clear waters of a river that silently flows across the land.

The Dalai Lama is My Neighbor.

This is a meaningful piece. Thank you Radhika for sharing this!

From the other side of the border I echo the sentiments of this beautiful sketch by Radhika. I remember my mother’s best friend who lived a few houses away from us in Dhaka, Bangladesh. She, a constant presence in my childhood, was Assamese, a lost piece of data that surfaces to consciousness ages later in the stir of today’s politics. Politics, that is to say, the manipulation by others of the multiple identities each human being has to have. Ethnicity, language, religion, nationality – false labels! Is it not how we are to each other, our hopes, our fragility – our humanity, in short – that is simply and truly what we are?