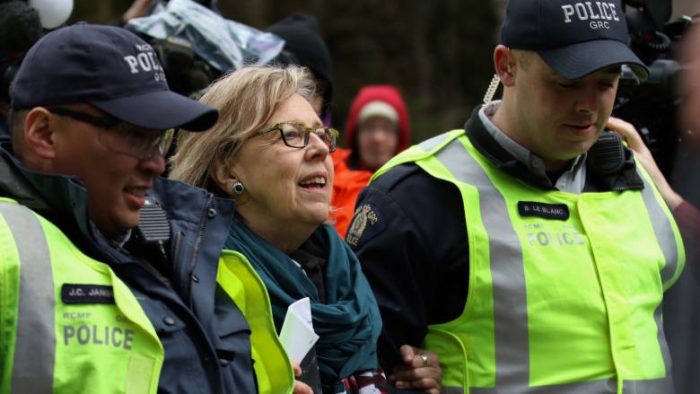 Canada is usually noted for its heart centered socialist government that offers free medical care for the last half century. Justin Trudeau, our Prime Minister recently promised Reconciliation for the indigenous population after there was an attempt in the 1960s to kill the native culture through Residential Schools. It was a terrible part of our history but the promise was made that the theft of land and culture would never happen again.

Justin Trudeau sounded good until he started forcing a pipeline carrying Diluted Bitumen (or DilBit) through beautiful British Columbia to the Pacific Ocean. The mainstream press refers to it as an “oil pipeline” but it is not oil! DilBit is a mixture of carcinogenic solvents mixed with carcinogenic bitumen or (tar).

A major spill of Canadian DilBit happened in the year 2010 in the Kalamazoo River in Michigan State. Eight years later and one billion dollars of cleanup attempts failed to restore the river. It has proven to be impossible to recover from a DilBit spill. Now this terrible material is proposed to travel by pipeline from the Tar Sands of Alberta, throughout British Columbia, to tankers waiting to take the material to China. A spill in the ocean of this material would spell the end of marine mammals including whales, seals, sea lions and otters on the Canadian West Coast as well as in Oregon and Washington State. I am not going to discuss the details, but rather will give a bunch of significant links to websites outlining the extreme danger to the environment of Canada and the USA!

For the indigenous population it means that native fisheries and sacred lands will once again be taken from them along the route of the pipeline! Justin Trudeau has turned into an Oil Baron and the apparent “Reconciliation” for the native population has evaporated! Some native groups along the coast have vowed to wage war with the Canadian government! It has happened before in the famous Oka standoff in the late 20th century when native warriors waged war in Quebec.

I will say no more … but the links below have critical videos and text links that USA people should watch to stay informed and possibly to participate in the condemnation of what is happening in Canada. The Green Party federal leader Elizabeth May was even arrested for protesting the pipeline! The picture is of Elizabeth May protesting this environmental disaster in the making up in Canada!

Prime Minister Justin Trudeau a disaster for the planet:

Pollution of the Kalamazoo River with Canadian DilBit:

Residents of Washington State, Oregon and California take note of the environmental disaster in the making up in Canada. Do what you can by contacting your USA Congress representatives!

Writers Profile
Ian Faulkner of Vancouver Island is known as a “crazy eccentric inventor” by his friends and neighbors because he does not own a car, has supported his family for 40 years by inventing electronic products, and has dozens of unusual hobbies. He is a Sufi, Buddhist, Christian, and Taoist spiritual explorer using meditation, psychedelics, bodywork, and ecstatic dance. Ian’s professional skills include electronic engineering, Trager massage, intimacy education, web journalism, and scientific research for product development. He has many hobbies including beekeeping, alternative medicine, photography, rock collecting, astronomy, mushroom study, jewelry making, dancing, yoga, and meditation. He is active on Facebook and maintains many web sites which are showcased on the landing page here: ( http://ian-faulkner.com )