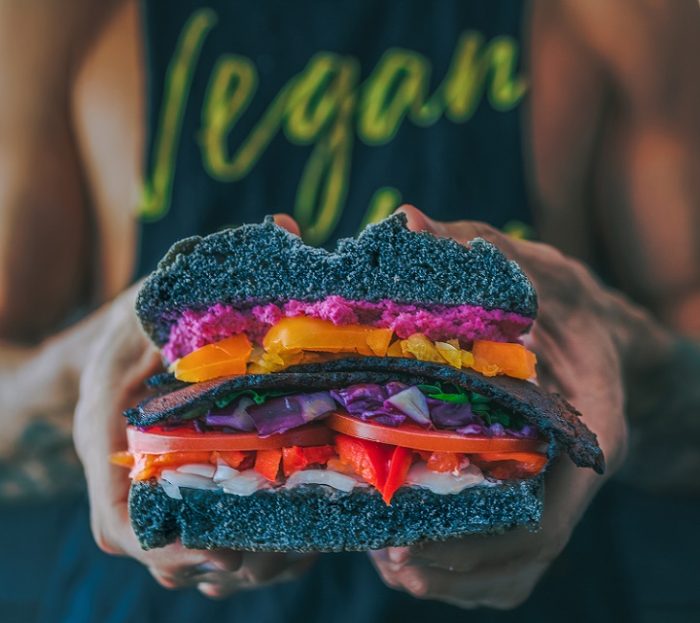 The 3 reasons to be vegetarian.

I’m not talking about:

The real vegetarians are people who know what I’m talking about…they eat a wide variety of vegetables, fruits, nuts, seeds, pulses, grains, seaweeds…and whatever other yummy stuff they can get their hands on (okay, apart from meat – more on that later). They also recognize that in order to really feel their best, some spiritual practice is required. So as well as eating a balanced diet, they live a balanced life: striving always for the proper mix of material and spiritual aspiration.

So, three reasons you should either pat yourself on the back for keeping it real, or consider changing to a healthier, more sustainable, and ethical way of eating:

I don’t care what anyone says. Yes, you’ll find doctors who disagree with me on this, but I wouldn’t pay much attention: doctors, despite their many years of brainwashing (oops, did I say that out loud?) education often haven’t got much of a clue about what health is. They’re too busy fixing problems.

Being vegetarian is much better for your health than eating a diet that includes animal products.

Rather than asking doctors for unbiased truth, you’re better off asking insurance salesmen. I know that might sound funny but I’m very serious (as always): there’s a lot of money in insurance. That means that they get things right. So ask your insurance company – do they give better premiums for people who are vegetarian? Often they do – why? Because they know that there is less chance you’ll get heart disease or cancer (two of the biggest causes of premature death?) if you’re vegetarian. They know that as a vegetarian, you’re more likely to live longer, and they’re less likely to pay out. Yup, it comes down to simple economics.

So, why is it healthier to be vegetarian?

When you eat a plant-based diet, you are getting that sunlight directly:

When you eat a meat-based diet, you are getting second hand sunlight:

To digest that meat takes a lot of work for little energetic reward. It’s not worth it!

Health (as I said in the article linked to above) is not just about avoiding sickness. It’s about feeling fantastic. Yes, there are many people who eat meat and avoid sickness, there’s no disputing that. However, I believe that generally, it’s possible to feel more fantastic eating a vegetarian diet than it is eating meat. The reason being simply that your body will be lighter – yes, most likely in terms of weight, but also and more importantly in terms of photons. Your body actually contains light. You are light. That’s why we eat sunlight and drink water. That’s what we are.

‘Yes’, I hear you say, ‘but we’re also meat’. Well, sure, but do you want to feed the dense, gross, material aspect of yourself, or the subtle, light, spiritual aspect of yourself. That’s what it comes down to on the issue of health, and I know what I choose.

Our environment is… messed up. (I’m trying to give up swearing. It’s tough sometimes. This is one of those times).

‘What has the environment got to do with meat’ you might ask? Well, a lot.

As Ramesh Bjonnes pointed out in his recent article on the connection between meat consumption and global warming, the meat industry is now considered by many to be the leading contributor to global warming; more so “than all forms of transportation combined”! Wow. Or as they say here in Slovenia, land of forested hill-top churches and castles and bees: Uau.

There are about 6 billion of us humans on the planet. Each year in the U.S. alone (not counting China, or Europe, or anywhere else – just the U.S.) around ten billion animals are slaughtered (source: Wikipedia). I believe this may be a very conservative estimate – I’ve seen estimates of up to 40 billion. Nevertheless, if you think of this on a global scale, and then factor in the fish: you realize that the meat industry is actually responsible for the slaughter of many, many times more beings than there are people on the planet. Each year it starts all over again. How many animals and fish is that in my / your lifetime? I dread to think, but if you want you can do the math.

However, that’s only one side to the story: how a being lives is more important than how it dies. How do the vast majority of these animals live: in squalor and without dignity. Think of the worst Nazi concentration camp, and you’re halfway there.

I have no quarrel with killing an animal for food. Try telling the Inuit that they shouldn’t eat fish, or the indigenous people of Tibet that it’s cruel to eat Yak – they’ll laugh long and loud.

But what a difference there is between killing an animal with respect and dignity, out of necessity, and ‘growing’ animals industrially with no basic rights (fresh air, clean water, a little space) in order to slaughter them in a manner that is at best cruel, but usually amounts to torture.

Well, I’ve listed 3 good reasons to give up eating meat. For the sake of balanced and unbiased journalism, let’s at this point ask: ‘what are the reasons for eating meat?’

There’s only one good argument that I’ve heard for eating meat: it tastes good. It’s a great reason, because it’s honest. To many people, it does indeed taste good. I myself must admit to occasional cravings.

However, if we’re really truthful with ourselves, we see that in no way can a meat-based diet be justified; in the light of the environmental, economic, ethical, and health crises that we are living through today, giving up meat is quite simply one of the smartest, and best choices you can make.

Giving up meat is the single biggest contribution you can make to a sustainable, ethical, and healthy future.