Mercury in Retrograde is not a good excuse for you to be an asshole to me. 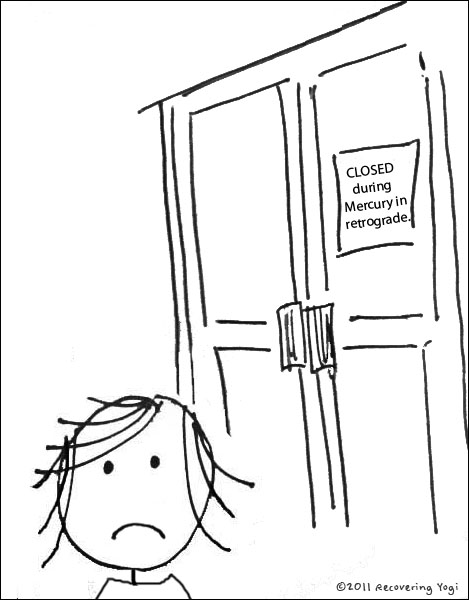 As one of the founders of Recovering Yogi, I think of myself as straddling the fine line between West Coast yogi and good old-fashioned liberal East Coast atheist.

It’s funny, because I never thought of myself as an atheist until recently. I used to be one of those “I’m not religious, but I’m spiritual” kind of girls. I believed in the energy of things and in karma and signs and the overall goodness of the universe.

Then I started dabbling in Buddhism, which was a coming-home experience. It felt like I snapped out of the pseudo-spiritual reverie I had been immersed in for a decade and woke up to the cold, hard, reality that life is, in fact, prone to be full of suffering and randomness. How we choose to handle the suffering is what makes or breaks us.

On the other hand, a lot of the contemporary “yogis” I meet here in the woo-woo-infatuated Bay Area adamantly protest that they can control their own destiny, with The Law of Attraction, a generally Stepford-like commitment to positivity, and a lifestyle dedicated to eating the “right” things and practicing the “right” ways and just generally trying to be good God-fearing yogis all the time. I recently met a soulless hippie who timed the conception of his children in order to have the “right” astrological signs in their charts. The fuck? Would you love your children less if they were Virgos? Don’t answer that.

When I began to dabble in Buddhism, I started to see that life is not something you can manifest, or dream, or wish, or BE into the shape you want it to be in. It’s just life. It just goes along like it’s gonna go along. **

When someone gets cancer, it’s not because they didn’t have enough positive thoughts, or because they did something horrible to someone else in this life or another one, or in any way that they in fact deserve cancer. Because if that were true, where would we have gotten the saying “only the good die young”? Life just does not have that sort of MEANING. People get cancer, and they die. We can choose to see this, and accept it, and live anyway. Or we can live in fear of it and suppress our fear by chanting the names of Hindu gods and believing haphazardly in astrology.

As much as the vapid saying “It is what it is” makes me cringe, it’s actually, technically, a great summary of everything.

But because I straddle this nouveau-spiritual/atheist line, I often come up against people in my life — people who I love and adore and respect and worship — who in fact do adamantly believe in the kinds of things I am inclined to consider hocus pocus: the Law of Attraction, the power of positive thinking, and the divine control the stars have over all mankind.

I’m a science girl, at heart, and I understand that the pull of the moon’s gravity controls the tides. That totally makes sense. But I have a hard time with the whole Mercury in Retrograde thing. I know I diverge even from my fellow Recovering Yogi co-founders in this regard, and that’s cool. I give a wide berth for other beliefs, I really do. The world would be a way better place if everyone could just be okay with each other’s differing beliefs.

What I can’t deal with is when my friends who believe in astrology suddenly start acting like assholes to me every time that Mercury goes into Retrograde. It’s like, one day they’re being their normal, compassionate, interesting, adult selves, and the next day they are super sensitive, testy, and difficult. They do warn me; I’ll give them credit. They’ll say “Hey Mercury is about to go into Retrograde, so I’m feeling nervous,” and I’m like, uh-oh, here we go.

The next thing you know, they’re handing me their hot potato.

The yoga celebrity I used to work with had this expression he used liberally to describe someone trying to unload their psycho-spiritual baggage on someone else. It was called “handing off a hot potato.” As teacher trainees, we were instructed never to take someone else’s hot potato.

So the next time Mercury goes into Retrograde? Keep your astrological hot potato to yourself. I’ll just be going about my business as my normal, predictably moody, autonomous self. I don’t need the stars to align a certain way to be a pain in the ass. And I’m not going to have a bad day just because some distant fireball thinks I should.

** One of my favorite Pema Chodron quotes, which I’ve mentioned in previous posts but think bears repeating often:

“The difference between theism and nontheism is not whether one does or does not believe in God.

Theism is a deep-seated conviction that there’s some hand to hold: if we just do the right things, someone will appreciate us and take care of us. It means thinking there’s always going to be a babysitter available when we need one.

We all are inclined to abdicate our responsibilities and delegate our authority to something outside ourselves.

Nontheism is relaxing with the ambiguity and uncertainty of the present moment without reaching for anything to protect ourselves. We sometimes think that dharma is something outside of ourselves—something to believe in, something to measure up to. However, dharma isn’t a belief; it isn’t a dogma. It is total appreciation of impermanence and change. The teachings disintegrate when we try to grasp them. We have to experience them without hope. Many brave and compassionate people have experienced them and taught them.

The message is fearless; dharma was never meant to be a belief that we blindly follow. Dharma gives us nothing to hold on to at all.

Nontheism is finally realizing that there’s no baby sitter that you can count on. You just get a good one and then he or she is gone. Nontheism is realizing that it’s not just babysitters that come and go. The whole of life is like that. This is the truth, and the truth is inconvenient.

For those who want something to hold on to, life is even more inconvenient. From this point of view, theism is an addiction. We’re all addicted to hope—hope that the doubt and mystery will go away. This addiction has a painful effect on society: a society based on lots of people addicted to getting ground under their feet is not a very compassionate place.”

Joslyn Hamilton is a freelance writer living in beautiful Marin County, California. She is one of the co-founders of Recovering Yogi and also launched Creative Truth or Dare. … Read full bio