Therapeutic Yoga: No Pain, No Gain?

I was so excited about the recent Yoga Journal conference in New York City.

I was going to push myself to the limit, sweat, bend, stretch, and hopefully come out of each class feeling five pounds lighter, more energized, and hopefully a little more enlightened. I spent hours looking at the schedule, deciding which challenging classes I would take. “I can’t come out Saturday night,” I cautioned my friends. “I will probably be too exhausted.”

Of course, as it does, Life chuckled and ushered me in another direction.

I awoke early this morning when I tried to roll on my side and felt heat and pain blossom in my chest. I don’t how I did it, but somehow during the night I must have pulled a muscle somewhere around my breastplate.

My first class this morning was supposed to be “Shakti Flow” with Seane Corn, who Waylon told me is one of the people to meet at this conference. But then the short description cautioned,

“Not recommended for individuals who are more than six months pregnant, injured, or in need of therapeutic yoga.”

Ouch. I couldn’t heft my backpack without cringing, so that was out. I’ll try to catch her later. I quickly skimmed my options and came across the benign-sounding, “Mind-Body Flow: Crafting a Therapeutic Vinyasa Practice,” with Bo Forbes.

Forbes is is a clinical psychologist, yoga teacher, and integrative yoga therapist whose background includes training in biopsychology, behavioral medicine, sleep disorders, and stress management. Her focus is on restorative yoga that plies the connection between mind and body to help people overcome mental pain and trauma. She believes that laying a solid infrastructure in our yoga practice will help bring it to a more therapeutic level.

Forbes has just gotten back from a whirlwind tour of the world, including London, France, Italy, Toronto, Shanghai, and Phoenix, and she’ll be at a book signing for Yoga for Emotional Balance: Simple Practices to Relieve Anxiety and Depression as I write this, at 3pm.

(Read a detailed review of the book here.)

I’m no instructor, and this was an instructor class. So I settled in at the back and took notes:

I remember a teacher once saying, “You guys need to just listen, okay?” when class participants kept putting their feet and arms in the wrong place. I would like to see her in this classroom. I watched all the teachers around me silently fidget around trying to figure out the exact placement of the block, put their leg in the wrong place, and get adjusted by the assistant walking around. We all do the best we can with verbal instructions, but sometimes we just need help—teachers included.

Up the Stairs and Backward.

Forbes touched on many topics: the lymph nodes in the neck, the core body, and seated meditation. But one thing she kept emphasizing again and again was a special alignment of the neck. Try it right now as you’re sitting reading this: hold your neck regularly. Now stretch it up, “like a giraffe,” she said, while looking forward. Keep stretching. See in your mind’s eye the place where your neck meets your shoulders. She calls this the other tailbone. Tuck it in. Now pull your head back just a little bit. This is what she calls “Up the stairs and backward.”

She reminded us of it while we were in downward dog, in forward bends, sun salutations, and even in upward facing dog. It’s a posture that is supposed to regulate the flow of emotions. If you tip your head back, she reminded us, it all flows out. If you tip your head forward, you lock everything in. Diane from Center Moriches says she will definitely use it in her class, though it took a little while for her to grasp the concept until she saw it in action.

“I like her,” Diane says, “I’m definitely going to take another class with her.”

In talking with the teachers from the class, not everyone was enamored. Christine from New Jersey said it was informative… “I guess. I thought I would learn more.”

Indeed, the class was slow. Forbes would instruct, and then bring everyone back in to take questions and lecture more, maybe having someone come up to the front and demonstrate. But teaching—and learning to teach—is a long, patient process, is it not?

And Barbara from Long Island though it was great. “It was the perfect amount of information,” she said as everyone gathered their things. “I had a general idea about bandhas, but it was good to reinforce. It’s added into my arsenal for working one on one and answering questions.”

No Pain, No Gain.

If you’ve ever been in therapy, you know that the sessions themselves aren’t exactly uplifting. You root around in painful emotions, you might cry, you  might confront some jarring stuff. But you come out on the other side hopefully feeling better.

Now imagine a therapy session in which part of it was physical. Forbes put us through some uncomfortable positions, like the core work, where we we placed our body on a block. I was already frustrated from missing my planned-for class, and the block exacerbated that. But after it was done—I did pull through—I felt a bit better.

At the end of the class, she had us in sideways plank, with our thighs resting on blocks in order to work on our IT bands. Ouch! The class was filled with the sound of normally patient and positive teachers practically whining about the pain they were in, as we rolled back and forth. “They were very painful,” says Diane. “But afterward they were very incredible.” She feels great, a couple hours later, and plans to incorporate that IT band work into her own classes.

Now I’m sitting here, checking into my own body. There is still some tightness in my chest, but I can move freely without cringing. It turns out that class was exactly what I needed. Will I be better in time for the Dharma Yoga Master Class tomorrow morning with Dharma Mittra?

Only time will tell. 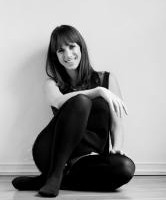