I Am Grateful for the Stillness: Yoga and Politics

Next year will mark my twentieth out of high school. There are corners of my being to which this seems absurd, as they’ve yet to fully process how deep into my thirties—or “the third floor” as we say in Colombia—I’ve come. So far, I’ve quite enjoyed this “floor,” felt the palpable benefit of perspective and life experience, embraced some noteworthy changes, such as marriage, maternity, job mobility, and the ever-increasing awareness that a firmly rooted yoga practice has granted me. I am grateful for it all. I am also virtually unrecognizable to my childhood friends.

The (tiny, by American standards) class I graduated with are people I’ve known for many, many years. I’ve kept in touch with a number of them and we’ve seen one another regularly in the last two decades, so that the change in our appearance, which is arguably the most common trope of the “reunion story”, is also, for us, the least interesting.

On the phone with one of my closest school pals the other night, we discussed the probability of a reunion and caught one another up on news about other friends, scattered across the globe. “Pretend we hadn’t been in touch all these years,” he said, “what would surprise you the most about me today? And don’t say the beard, or I’ll shave it.” I thought about it and told him I wouldn’t have expected him to live where he does (kind of a cop-out, in retrospect, as geography is not really something “about us”). And then, of course, I wanted to hear what is so wonderfully quirky about me now. “I refer you to our previous conversation,” he said. “Huh?” I asked. Then I remembered we had been talking about Osama Bin Laden.

Who is this person writing? “Who are you?” my school chum asked after prodding me to share with him my view on the killing. “I guess it’s good,” he mimicked my half-assed response when he passionately expressed his pleasure about the end of Bin Laden and his perceived closure of a gaping national wound. “On the other hand, if he’d been captured rather than killed…” “Yes?” my buddy egged me on. “I don’t know.”

I credit (fault?) two things with my wishy-washiness: disenfranchisement and yoga.

First: I lived in this country as a legal alien for 12 years. This means I always entered with a valid student visa, I refrained from committing any crimes or working gainfully aside from some on-campus teaching in graduate school. I had my special permit stamped by my school before each departure from the U.S. I paid taxes on every grant, fellowship and prize I earned. I declined more than one job offer which required U.S. residency; I declined more than one scholarship, including the National Merit, which required U.S. citizenship.

I’d arrived at my college dorm as MTV kicked off its first “Rock the Vote” campaign—Bill jazzing out on his sax, George Sr. looking (at best) uncomfortable as he tried to banter with Tabitha Soren (or was it Kurt Loder?) on the caboose of a rock ‘n’ roll train. After years of talking politics with my parents at the dinner table, throwing in my two cents about the fate of my poor, bleeding nation, I felt as if I’d just moved to one where every kid was like me: informed, opinionated, passionate. It was so inspiring. But after those twelve years of watching it all go ‘round trapped in the margins, my passion for politics deflated.

(Before you ask “Well, why didn’t you get a green card?” please believe me when I tell you it’s far from that simple. In some ways, it’s easier to get pardoned into a green card after you’ve already entered the U.S. illegally than to change your status from “legal alien” to “resident alien.” I got lucky: the man I fell in love with and married is a citizen. That’s how I finally got to stay here, which considering I went “all the way” in school and have been trying to contribute to society all along is terribly disempowering. No offense to my wonderful husband).

Second: yoga and equanimity. OK. This one is harder and worth unpacking. When I started practicing yoga I was looking for a low-impact workout, which is what I got immediately. Then, during one of my first classes, the teacher quoted Patanjali’s second sutra: “yogas chitta vritti nirodah,” or, in my own homegrown translation, “yoga is the method for stilling the unnecessary undulations of the mind.” (Go crazy, all you Sanskrit scholars). I heard that. And heard it. And heard it. So while I swore up and down that all I wanted out of the experience was a workout, and was many years away from anything having to do with “spirit”, I completely welcomed this stilling of my hyperactive “mind.”

It was that stillness that kept me coming back to my mat for the next dozen years, not the workout. (The workout part was so hard that if it weren’t for the mind part, I would have thrown in the towel and taken up the elliptical). I am grateful for that stillness, whose duration varies depending on what the rest of my day is like. But as my desire for that stillness and my relative aptitude for obtaining it grew, my political mind shrank.

Politics. Civil unrest. Bad legislation. Weak government. Vigilantes. Warfare. These are the sorts of things I grew up worrying about in Colombia. Raised in a first-floor apartment, my window had bars soldered to the frame. I would stay awake at night and fry my brain with concern that someone—guerrillas, paramilitaries, militaries, petty thieves—would break in. I learned words like “kidnap,” “car-jack,” “assassinate,” “drug war,” early. They reverberated for years and lit many a fire of my opinion on politics. To me politics meant all of these extreme phenomena, or at least that our political decisions directly impacted and created these things that terrified a whole country.

Politics are rooted in the polis or “city” of ancient Greece, where they invented self-governance. Democracy (demos being the “people” mentioned in “of the people, by the people”) was conceived of as a privilege one earned through participation. I have been fortunate always to live in such societies. I am no saddhu; I don’t live in a cave. I feel the need, still, to care about what happens in my community and participate in the political process. Yet I couldn’t muster my voice to chime in on the Bin Laden death.

Of course, this particular incident reaches beyond the larger governance of a nation and touches on our individual self-governance, our ethics, the yamas. It seemed as if everyone around me had no problem understanding and processing all of this, and producing opinion. Some of my friends cheered. Others posted on their Facebook page the quote by the Reverend Dr. Marin Luther King, Jr. that so beautifully calls for ahimsa. A great article on NPR reminded us that the moral dilemma is related to the fact that Bin Laden masterminded something that was a civil crime and a war crime, its magnitude testing the boundaries of both the laws of man and the laws of God.

Still, I don’t know what I think about it. Others have been so articulate in their take, that I will waste no more space with my own meanderings.

I am inspired, however, to find a way for my addiction to quietude and my duty toward the world I live in to cohabitate peacefully. I want to be infected by the passion that keeps my community-organizer friend awake at night, without letting it keep me up. I want to be as historically equipped and politically prescient as my husband, who knew the U.S. government would have to reconsider its aid to Pakistan before the announcement was made. His insight didn’t keep him off the mat the next morning. I want to be as fearless as my bearded friend to have an opinion again, and to express it, respectfully, to a friend who won’t judge me for it.

By the next presidential election, I will probably be a full-fledged citizen and able to express my opinion in the weightiest fashion: I will vote. In the interim, fellow yoga students, I am open to suggestions. 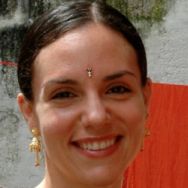