One Tuesday afternoon, I was sitting in the park contemplating my navel and the hugeness of the sky, and waiting for my daughter to finish her piano lesson.    I became quickly distracted by a kid in the distance doing his best impersonation of Napoleon Dynamite.    He was sitting in the lotus posture and then exploding into a round house kick and then would land in the lotus position.    I lost all interest in my navel and began to scream “yes,” entertainment at its best; a real life Napoleon Dynamite.

His teenaged exuberance did not stop for the full half hour I waited, (I can no longer lie and call what I was doing, meditation; I was fully distracted). He must have completed a series of 25 lotus position to round house kicks, with no break, and then went on to laying completely face down (acting like he was napping), and then jumping to another series of 25 round house kicks, followed by the lay down (fake nap) to jumping round house punches and I am talking about 15 punches and a 360 spin.

I am sure there is better Kung Fu terminology then I am equipped with, but I might have to call one of my friends from middle school to learn them, and I am not sure if I want to have that conservation. Next, this kid pulled out his nun chucks and would have made Bruce Lee proud. He went on to doing jumping rolls (2 or 3 rolls followed by a series of kicks and jabs) and get this, he was rolling up hill. I mean this kid had intensity. Watch out Rex Kwon Do.

My diagnostical skills as a therapist could have been tested with this case, but I was off the clock. My amusement actually turned to amazement. But my 30 minutes was up and it was time to get my daughter, and I wanted to make sure she did not miss this. She laughed and told daddy, “its Napolean.”   At that point I began to feel bad, what was I teaching my daughter, that it was ok to laugh and point at another’s expense. But we drove away and I noticed that inside I was actually moved by the determination of this kid.

The following week, the show continued, but this time I got a closer seat. I realized that this was no kid but a 45 year old man and today he was attacking a 200’ high tree, with such an intensity that I wondered about the well being of the tree. Then it occurred to me, “Holy shit, this guy is a force to be reckoned with.” My daughter reminded me that I shouldn’t say the “s” word. I really wanted to take this guy’s picture, but thought, I might be asking to get my ass kicked so we drove a little further off and watched with awe.

Why was I so in awe of this man? What did he have? What did he possess, that so enamored me? I quickly realized that this guy had strength, determination, perseverance, and an “I don’t care what anyone else thinks, I know what my life is about attitude” (some call this I don’t give a damn attitude, but I am writing to a spiritual crowd). As I reflected, I realized that these are attitudes necessary for Enlightenment; the willingness to go fully against the stream. And he had the strength and perseverance to go against the stream.

He did not just talk about it, he was fully living it. This was not just an insight he had in meditation, he put both feet down fully and gave himself to his dream of being a modern day kung fu master. And I was not about to step into the octogaon with this guy to check his authenticity, it was pouring out of him. He had what it takes to go beyond oneself, and I was utterly moved.

As I work with myself and others, I look at our intention to be Free, and remember that we must be willing to fully go against the habitual stream of our minds and egos. That we must be willing to fully stand in our own authenticity, our own goodness, and not be pulled back by our habitual responses to life, such as fear, greed, pride, aggression, laziness, passion, or ignorance.   We have to be willing to fully be ourselves, and by that I mean our highest selves; even if that means doing kung fu in the park while others laugh, or biting our tongue when we are about to be judgmental toward others (who may actually deserve our praise). 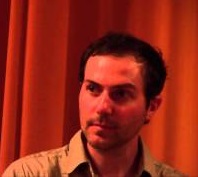 Craig Holliday is a Nondual Spiritual Teacher and therapist living in the mountains of Southwest Colorado. He is the author of Fully Human Fully Divine, Awakening to our innat… Read full bio