10 Reasons why Buddhism is Better than your Religion. 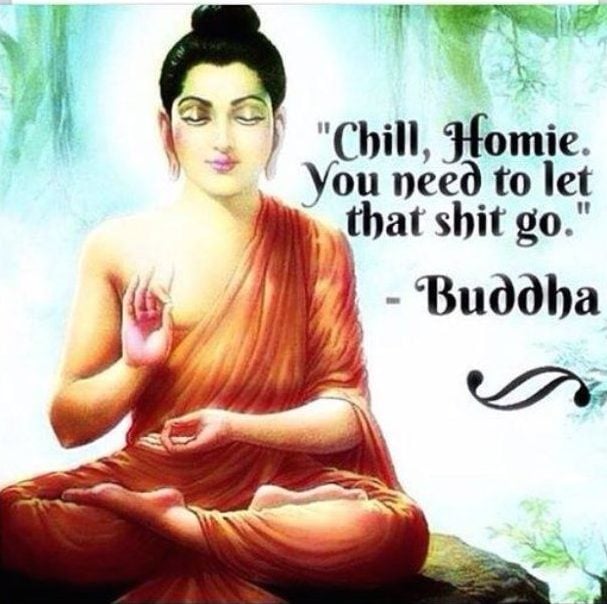 Wisdom burns its own flame. So does humor. So does this title, which makes fun of the notion of religious one upsmanship. Read beyond the title, if curious:

If you don’t do Buddhism

you’re not going to hell.

1. We’re not really a religion. As the Dalai Lama said, if Buddhism and Science disagree, go with science. As the Buddha himself said, don’t believe anything I say unless it matches with your experience.

We are however a path: there are teachings, meditation practices, rituals with meaning…but it’s all centered on one point. Wake up. Be kind. Be present. Be genuine. Be generous to others.

2. We don’t go to war, much. Historically, when we’re attacked, our anemic joke-of-an-army fights heroically while the rest of wherever we’re at flees, gets burned, looted, raped, pillaged. No fun for us, but at least we don’t fight others in order to spread our religion.

3. Buddhism works. If we meditate, and we meditate some more, and we study, and we work with our mixed bag of a (difficult, incompetent, sycophantic, insecure, kind, generous, gentle, eco-minded, tolerant) community, we’ll naturally begin to soften, and straighten, and enjoy life, and help others enjoy life more, too.

4. Buddhism doesn’t believe in anything. Any Buddhist who tells you to believe in reincarnation or anything that can’t be proven is caught up in superstition, and should be forcibly sent to remedial Buddhist meditation camp, which sounds like a fun camp.

6. Buddhism is non-theistic. In Buddhism, we’re taught to bow with mutual respect, and self-respect. You aren’t any better than me except to the extent that you serve me and others better than I do. Serving is leadership.

Our hierarchical triangle is upside down. To lead is to serve. To lead without serving is selfish and useless and silly. If a Buddhist teacher leads out of arrogance or selfish privilege, they will be slapped in the face, with a grin. It’s happened.

7. Buddhism doesn’t say other religions are wrong or anyone’s going to hell and doesn’t advocate judging others “nonbelievers” from afar, let alone sending them to some sort of eternal damnation. In the Buddhist view, we’re all damned already by our happiness-desiring egos, but luckily we’re all fundamentally aok, and we just can relax and (through meditation, study) begin to be ourselves, and serve others in suffering. And then the joke is we’ll start being happy.

8. Buddhism is of the world. It is wildly enthusiastic about money, sex, family, business, sports, books, education, politics…as long as these things are being used to help us and others wake up and be of benefit, it’s all good.

9. Buddhism is not laissez-faire New Ageyness. While Westerners who embrace Buddhism as a lifestyle may be irritating Portlandiaish parodies of a type, like yours truly, Buddhism is all about tradition, about being a good, dues-paying member of society, about decorum and giving back and the arts.

The 10th Reason why Buddhism is Better than your Religion is…

We’re not better than your religion. Your religion has lots of goodness and helpful stuff in it, and you should honor and practice that if you like. If you don’t like, you should become agnostic or atheistic and that’s pretty awesome, too. My grandma is a lifelong intellectual agnostic, and she’s the kindest person I know. As an old Christian saying goes, I can see how close you are to God by how kind you are.

Yoga, Christianity, Buddhism, Republicanism, Libertarianism, any ism…none is better than another. That’s not the point. They’re paths of truth, hopefully. Of finding peace, and true happiness. They are not meant to create further war.

Let’s stop the My Way is Better than Yours stuff.

Bonus:
This is all Buddhists want:

Buddhism isn’t about being perfect. It’s about having a sense of humor, and getting over ourselves, and yet being ourselves: