The Lingerie-clad Yogi Behind the Equinox Video: Briohny Kate Smyth.

Meet the awe-inspiring yogi in lingerie, from the Equinox video, Briohny Kate Smyth.

The beautiful and controversial video, that went viral in two days, with two million views, made me want to know the real woman in the glass-walled apartment, practicing asanas with the sleeping guy in bed.

Inspiring and empowering, the video embodied strength, commitment, integrity and beauty. And for some, it triggered fear–comparing, judgement, insecurity, or even defeat–allowing the video to simultaneously serve as the perfect opportunity to get curious, rather than judge.

Here, some words from the woman, herself, on body image, healing, and the power of yoga and a daily practice of self-care.

J: What was it like shooting the Equinox video?

B: So cool. It felt great being in front of the camera and not having to be 90 pounds–for me, it was just awesome. We really had no idea how this was going to go down or that it would be so controversial or so popular. It was a one-day shoot. I got there and they gave me underwear; I usually see people in the least amount of clothing, because I’m a yoga teacher, so I didn’t think anything of it. And I know that showing the lines of the body really helps, when demonstrating yoga. The production crew had a great vision. I mentioned, in another interview, this one moment where my old ways of thinking came in and freaked out for a minute and my fiancé said, “You look beautiful.” I couldn’t let my butterflies get to me. It’s okay to have that moment, but then let it go and freak out later. So, I had a ball.

J: What is your personal experience with body image?

B: I grew up in LA from three to eleven and was larger, as a kid. I began singing and performing in Thailand, at eleven, and I’m thankful for those experiences. But it was challenging starting out in that industry at such a young age and being half Caucasian and half Thai, because Thai women are naturally very thin. Since I wasn’t, people were telling me to lose weight and get on diet pills–targeting my baby fat in my cheeks and thighs. Not having the tools to cope, I internalized it, and figured the only way to live my life was with an eating disorder and a lifestyle that continued to ruin my body and confidence.

Even then, the image I wanted to put out was to inspire women, but behind the scenes it was a different picture. To this day, I’m still not cured–I’m just healing. Anything can be an addiction–food, relationships–even yoga! These experiences have shaped who I am today; we all need a rock-bottom to create the drive to live our life to the fullest.

J: What has been your path to healing?

B: I found yoga at 15 and started experiencing the concept of self-care, for the first time. But my negative beliefs and behaviors were still present and I found support within 12-step programs like OA. They helped me recognize my responsibility in all areas of my life–I had to look inside me and understand how I create my life and my relationships. In 2004, I got pregnant, and it really changed the way I took care of myself.

My pregnancy was the biggest healing process in my life; it was a clearing of the negative beliefs and allowed me to just be a mama. Healing is a daily occurrence–it happens every day. Some days are harder, and you call in the tools–affirmations, mantras, gratitude lists–anything that helps you stay present. For me, it’s turning to my practice and these tools, rather than outward, to people, for support. Practicing self-care allows you to go inside rather than become dependent on other people (and other external things) to make you feel better, creating a more sustainable path to happiness.

J: Tell me more about the power of yoga in your life?

B: Yoga was my first wake-up call for healing. When I was 15, I went to Tibet, to film a travel show, and my mother said, “You sound different. Maybe you should stay”. I had discovered an ashram there, in Nepal, and loved the level of spirituality. Any time you’re able to focus on one thing for one or two hours, it’s spiritual, especially in our culture where we’re just going and going. After the ashram, yoga became really huge in my life and I began to slowly integrate it into my daily life. Over the years, it became a ritual and routine. It held me accountable for what I did. When someone new to yoga asks me where they should start, I ask them what they’re looking for. Their focus is usually around the physical gains, and in time, it moves beyond becoming more fit, and it creeps into every crevice of our life, becoming much bigger than we could have imagined, while connecting with a different part of yourself.

B: Savasana. We work so hard during our practice, so that’s a time when we can really reap the benefits of all the poses we’ve just done (all of which, I love). I also love the handstand. It has really changed my practice and my life right now, boosting my confidence and creating upper body strength. The handstand keeps things fun and light–and I can practice it with my daughter, which inspires her, too. 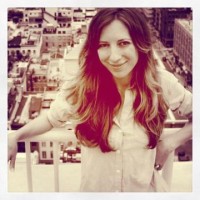