“The good we secure for ourselves is precarious and uncertain until it is secured for all of us and incorporated into our common life.” ~ Jane Addams

By now, you have probably heard about the controversy surrounding the founder and leader of the Anusara yoga community.

I won’t inventory the allegations, but you can read them here.

John Friend is a charismatic man with power over thousands of teachers and practitioners. Though I have been an active participant and supporter of the yoga and mindfulness communities, and an Anusara yogi for more than a decade, I was not surprised by these revelations.

Because all of us, as the Buddha taught thousands of years ago, have the same human tendencies toward greed, anger and delusion. Just because we establish a yoga organization, minister to a church, do international aid work or work in an orphanage, doesn’t mean that we are perfect. And if we have a well-loved teacher or mentor, our biggest and most dangerous delusion is that our teacher or leader could never succumb to greed, anger or delusion.

The first of the Buddhist Four Reliances, as translated by the Dalai Lama, is: “Do not rely on the person, rely on the teachings.”

Knowing that, what is the skillful response? Our Washington DC yoga studio has been meditating on this question for a year (before these specific allegations arose), and our decision was to take the pioneering leap from being a private owned corporation to becoming a worker’s cooperative. In this way we now share the decision-making and income fairly with the entire community, creating a more resilient, versatile and impactful organization.

We are calling this Fair Trade Yoga.

The elected board of a cooperative makes decisions about studio operations, finances and even whether the organization continues to exist. In addition to worker-members, in a yoga cooperative, students can become student-members and be elected to serve on the studio board with teachers and staff. So, in addition to fair sharing of revenue, a cooperative organization fosters a community of equals, living the Buddhist teachings of equanimity, as described by Zen master Thich Nhat Hanh:

‘To be’ is to inter-be. You cannot just be by yourself alone. You have to inter-be with every other thing. This sheet of paper is, because everything else is.

Because of our human tendencies, organizations are more vulnerable when they are controlled by a single human being. It’s a lot harder for us as leaders to make good decisions when we have absolute power. And it’s a lot easier for us as students to think our leaders are God-like when they have unbridled power over so many people.

That’s why the checks and balances system of democracy is so important. And it’s also why the Buddha taught that the most important part of the practice is having spiritual friends, or sangha, to help us stay on the path. We are like ants that need a colony. Like a single ant, if we operate alone, we will not survive.

As Chögyam Trungpa Rinpoche, Buddhist leader and himself involved in controversy over sexual impropriety, explains:

Your friends in the sangha provide a continual reference point, which creates a continual learning process. They act as mirror reflections to remind you or warn you in living situations. That is the kind of companionship that is meant by sangha. We are all in the same boat.

When someone initially creates an organization, most of what is born is the founder’s vision. As more people get involved and the organization grows, when is it time for the founder to step back? When an artist paints a picture, it can be very difficult for him or her to let it go. It’s the same with an organization. It can be hard for the founder to let go of control. But if he or she doesn’t let go, the organization continues to rest on the back of that one person, with no shared oversight or support, making it much more vulnerable to the dis-eases of the leader.

If we really want an organization to thrive, founders need to share their leadership with the community as it grows. Organizations are stronger when they are guided by the sangha, each of us supporting each other’s ability to see clearly and make skillful decisions. If one person stumbles, the organization doesn’t have to collapse and create difficulties for hundreds, thousands or even millions of people.

In a cooperative organization, everyone is invested in the product or service that is being offered, and everyone has input into how the organization operates.

We hope that as a community of practitioners working together cooperatively to offer Fair Trade Yoga, we will be able to support the highest and best action for the organization, and for the community it serves. 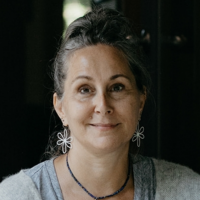 Annie Mahon (she, they) is a white, Armenian-American, ordained layperson in the tradition of Thich Nhat Hanh (2009), author of Things I Did When I Was Hangry: Navigating a Pe… Read full bio