Fighting the War on Women…with a Watergun.

Ah, my three-year-old daughter…shirtless, wearing a Hello Kitty skirt, rain boots and carrying the biggest gun she can find…

So why does this make her a feminist?

Because she’s chosen to be girly, manly, brave and silly all at the same time.

Because no one told her to dress or act this way.

Because she has the “choice.”

My mother was a feminist. She was a member of NOW (National Organization for Women) and the NCJW (National Council of Jewish Women). She protested. She marched. She even sued an employer for discrimination—and won. She chose to get married, have kids and stay at home. She fought for her rights to be the same as my father’s. She worked, she volunteered and then she “chose” to stay at home with her kids.

Growing up, I thought that the fight for women’s rights was over. I figured my parents’ generation, had fought the fight and won. Ah, the blissful ignorance of the 80s!

It was all leg warmers, slouch socks, pegged jeans and big hair. Spoiled, yuppie child that I was, I didn’t see that the battle wasn’t over. Now, 36 years after my mother chose to stay at home, we fight again. They are calling it “The War on Women.”  I think it’s an apt title.

We fight the government officials who introduce “personhood” amendments, who try to require transvaginal ultrasounds prior to an abortion, and restrict access to birth control. But it’s not actually about abortion or birth control.

Regardless of your personal feelings or religious beliefs on either matter, it’s about the belief that, as a woman, I have no autonomy; I have no say in what I do with my body; my body must be controlled by the state.

This is a slippery slope.

When the state takes away one right, it sets the precedent to take away others. Restricting access, to what are fundamentally personal choices, tells us that women are incapable of making those choices on their own. How far will we be rolled back?

Life isn’t black and white. It isn’t right or wrong. There are many shades of grey.

What else can be taken away? What will be taken from you?

But it isn’t just the state that looks to cement the belief that women are incapable of making their own choices. We fight the doctors and nurses whom we trust with our pregnant bodies and our babies. When tests, procedures and medical interventions are done to us, not for us, it shows a severe disrespect for women.

When all laboring mothers are given the same “standard” procedures, even though we know every birth is different and there is no “average” or “standard.” When episiotomies are cut without informed consent, when a mother is told she doesn’t know her body or her baby well enough to trust them during birth—when women are pushed through the assembly line of a hospital birth and spit out the other end with a C-section scar, breastfeeding challenges and no support—we fight.

We fight the popular media. We fight them on many fronts, not the least of which is pregnancy, birth and parenting. We fight them on misinformation. This: “Pacifiers and Breastfeeding”  is not a published, peer reviewed study! It is, in fact, not actually news because it hasn’t been validated. Yet, it’s been all over all the news outlets. In February 2012, the American Academy of Pediatrics put out their Policy Statement—Breastfeeding and the Use of Human Milk. But yet, it gets little news coverage, and little coverage in the blogosphere. (Well, okay, “I” covered it.)

The media also focuses on things like how quickly can a celeb lose weight and can “real” mothers match up? Yet, we allow it. We allow ourselves to be compared to what we know, intellectually, is unrealistic. Emotionally, articles like this are hurtful.

They pit working moms against stay-at-home moms and call it “Mommy Wars.” I think the media started it. They picked up on our insecurities and this is what we get.

I don’t like the term “Mommy Wars.” It makes it sounds like women are taking up arms against each other over what are fundamentally personal choices.

There’s been quite a bit in recent media regarding feminism and parenting choices. I know women can be catty; they can bully and they can make other women feel guilty. I also know that a lot of the “Mommy Wars” talk is hype and doesn’t match the reality of life.

Take this fabricated debate regarding “Attachment parenting: Feminist or Not.” There are multiple bloggers on both sides of the issue. But really, the whole debate isn’t feminist!

Feminism is about equal rights, civil rights—the right to own land, vote, equal pay for equal work, play sports, etc. When we are truly equal we will not be looked down upon for choosing the “traditional” roles of wife and stay at home mother.

We only are truly free when we have the rights to choose our own path. When the opportunities are there for everyone, and when no one group tries to take away the freedom of choice.

You don’t have to like my lifestyle, my parenting or my politics. You do need to have some respect for that which is different from your own.

My daughter is a feminist. She doesn’t have the limitations in her head about her own gender. I want her to continue to believe she is limitless. 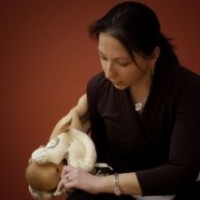