How I Dismissed the Ashtanga Police.

No Dinner? No Breakfast? No F—ing Way!

So yes, I’ve been a dabbler, and in this practice for a number of years. But it’s only been in the last year that I’ve become a regular, and less than six months since I’ve become, officially, a card-carrying supta kurmasana-slinging Ashtangi.

But I ain’t a six-day-a-weeker. I also practice on (gasp!) Saturdays, sometimes even moon days (double gasp!), although I take some Saturdays off, as well as Mondays and often Wednesdays too. Oh and I eat dinner, early, but not at 4 p.m., and occasionally sneak in a later dessert. Sometimes I even eat a little before I practice on Sunday. In short, I’m breaking a lot of f–ing rules. I care, but I’m happy with where I am.

I’m a stay-at-home mother to a toddler and I teach a little bit of yoga. I have a lot of stuff to do besides twist my ass into a marichyasana D pretzel.

While I proclaim my rule-breaking business proudly, I only got comfortable with this state of affairs, like, um, five minutes ago? You see, this fall I fell for Ashtanga. The experience of committing to this practice, finally, was a lot like the joyous free-fall of falling in love. The birds sang, the sun shone, and small creatures trailed behind me singing as I walked from the studio in the early morning hours back to my car.

And then, the music stopped. The Ashtanga Police stepped in and shut those singing creatures up faster than you can say “Ekam.”

I wondered if there was a rule about when you could have sex, too. I decided not to ask.

I first met the Ashtanga Police on an Ashtanga intensive weekend with certified teacher (and generally awesome, incredible and amazing), David Garrigues. It was a weekend of firsts: My first weekend away from my child, my first weekend not breastfeeding and my first weekend standing up after a drop-back. This weekend marked my crossing of the threshold into Ashtangi status. But as I entered into this intensive, I really knew very, very little (and yea, I still know very little). Fortunately, I found myself surrounded by lovely yogis who made me feel loved, included and comfortable notwithstanding my longtime delinquent Ashtangi status. These same yogis also managed to inform me, albeit with the care and concern of a doting mama, of various “rules.”

We arrived on a Friday night. No one went out to dinner (apparently, our late lunch pit stop at a Panera bread had been “it”). Then no food at all (save for my own snacks) until an almost lunchtime break the following day (I thank my beautifully generous host yogis for saving me from passing out with some lovely yogurt and an array of other break-time snacks). Surely, that night we would go out to dinner. It had only been over 24 hours since our last real meal. Wait, what’s that I hear? Dinner is up for debate? Seriously?

Thankfully, I found a few other yogis who agreed we needed some dinner (though “if we go, it’s got to be soon,” they informed me, naturally, in order to be ready for a 9 a.m. practice the following day). I enjoyed the weekend immensely, but credited my survival to my “never-leave-home-without-snacks” mother mindset.

David Garrigues’ passion inspired me to buckle down and commit to my practice when I returned home. I began to arrange for sitters and whatever else to show up four to five times a week. I also started eating dinner earlier, earlier and earlier. But then the sheer balancing act of trying to get there so many mornings and eat every day at this precise time, with a toddler, went from fun to work.

My love for Ashtanga had come up against my latent overachieveritis, a condition I have suffered from since I was a child—it’s that part of me that knows: (a) that there is a bar, (b) exactly where that bar is set, and (c) goddamn it I’m going to exceed that bar wherever it is!  As this part of me came out, my practice became a stress on my family.

That weekend David Garrigues said something that spoke to me, but at the time I didn’t quite get it. The practice “comes from a love,” he said. “Not from a sense of duty.”

Aha! My practice had become a duty-ridden struggle. Where’s the fun in that?

This came to a head over the holidays when I desperately tried to sandwich practice in the middle of short three-night trip across the country for Christmas, because Jesus, what would the Ashtanga Police say if I had three days off in a row? And so I got up to practice on my own the day we were to depart (translation: the day we were to spend 12 hours traveling with a manic toddler on an airplane. If you’ve never done this, you don’t understand. If you have, then you know and feel my pain).

I practiced in a cold hotel fitness room, quite heartlessly leaving my husband to deal with the lion’s share of the work to pack us all up for the trip home. Maybe it was karma. No I’m sure it was, but that morning I felt a “not okay” tweak in my left shoulder.

I returned home raring to get into my usual practice schedule, but then the tweak became an “ow.”  There I was, needing things like “rest,” “modified” chaturangas and skipped jump backs. In short, all the gentle sh*t an intense overachiever like me hates.

As I breathed in janusirsasana C during one such frustratingly gingerly-taken practice, I found myself nearly in tears. “Why now! I just got my life back after the holidays! I am so close to getting second series! Why does everyone else get to do this for real, while as a mom I’m stuck here doing things half-assed enough as it is so why does this have to happen to me now!!”

With my chin at my shin, I acknowledged, perhaps for the first time, all the judgment I was wielding against myself.

I began to see it truly as that—punishment by my own hands. And then I was able to feel compassion for myself, and just let all this shit go. And really, with that realization during that modified practice, this seemingly serious injury melted away and two days later, my practice was back to normal.

When it all becomes a struggle, you’re doing it wrong.

This week I practiced only three times given that the moon day occurred on one of my precious few practice days. I took Saturday off too, because my husband wasn’t feeling well and wanted me around that morning. I returned to my mat on Sunday, after a two- day rest, feeling amazing. I had a great time on my mat, for the first time in quite awhile.

And so, um, five minutes ago, I decided that it is okay for me to eat at 6:30 p.m. It is okay to eat before a half-day weekend workshop. It is okay to practice four times a week, and maybe only three times some weeks given moon days, holidays and family obligations.

It’s more than okay. It’s perfect. For me.

The Ashtanga Police—all those voices I imagined judging me, saying I was not meeting the standard, declaring that what I was giving was not enough—well guess what, those voices were me. They come from me.

It turns out that the Ashtanga Police exist only inside my head.

Because I gave this imaginary force power, I could take it away. The Ashtanga Police have been dismissed. They were no fun anyway.

Except for their pro-coffee rule. I’m keeping that one. 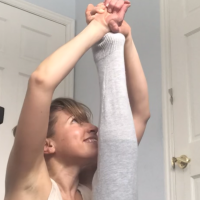 Jean Marie is a yoga teacher and blogger in Park City, Utah, where she landed with her family after years teaching and practicing yoga in Washington D.C., Virginia, Boulder, a… Read full bio