Date a girl who spends money on electrolytes instead of lattes. Who has problems with closet space, not because she has too many clothes or things even, but because she’s jammed everything out of sight so she can have a proper space to meditate. Date a girl who is comfortable in silence, who knows when to flex her toes and when to let them go, who believes in building forts and sitting in them.

Find a girl who practices Hot Yoga. You’ll know she does because she’ll arrive to the party 15 minutes early. She’s the one in Mountain Pose wearing something really tight or really flowy, the one without a drink in her hand. Not because she doesn’t drink, but because she spent four hours in the hot room and is concerned about her state of hydration. You’ll thinks she’s drunk because she’s laughing loudly and making gestures, but really it’s because she’s comfortable releasing on sound and moving. She’ll come alone and leave alone and no one will wonder why she is alone because you’ve never seen a woman walk out the door with such a tall spine.

Date a girl who has an imagination. Who believes in animals and pretending to be them. Who is a Rabbit, a Camel, a Hero or Half a Moon.

Who pretends to be a tree because she knows you have to be anchored down to be free anywhere else. Who is comfortable tying a string to her heart and pulling it upwards.

Buy her a block or a strap or a bolster. Better yet, a bean-filled eye bag. She’ll already have one, but any experienced yogi knows that props mean support and the more support the better.

Sometimes when she’s doing the balancing series she strains her neck and compresses her low back on purpose. She likes to think she can do it all herself, even though she would never admit it. The next time she’s in Dancers, push her over and pretend it was an accident. Let her go and tell her she’s graceful even when she’s falling.

It’s easy to date a girl who practices Hot Yoga. Tell her a story from Hindu Mythology, like the story of the great goddess Lakshmi. If you’re intimidated by this, tell her any old story. Tell it to her while she’s lying on her back. Then leave the room and dim the lights. Even if she doesn’t get it just say Namaste after and the outer edges of her lips will curl up.

Watch her. Upon first glance it may appear as though she’s checking herself out in the mirror, but really she’s practicing her drishti. And if you look really closely you will see her eyes are like fire because she knows the difference between looking and seeing. Either that or she’s trying to practice her drishti but it’s difficult to stay still especially during the time of month when her blood rages.

Why be afraid of everything that you are not? Girls who practice yoga understand that people are like animals. And the more you pretend to be them, the better person you will be.

If you find a girl who practices hot yoga, keep her close. And when you find her sprawled across the bedroom floor in a tantrum, look closely, because she’s actually in Pigeon.

When you ask her what she’s doing, she’ll tell you she’s letting go of all her ex-boyfriends. Don’t take it personally because what it really means is she’s making more space for you. Breathe in, then let it go on an exhale because if she’s taught you anything it’s been that what matters most is what you let in, not what you let go of.

When you propose, do it in the hot room. Kneel down on your mat, but put down a towel first. She’ll say yes by kneeling down beside you. Place her hand in yours but keep it relaxed. Tell her you’ll hold her for all the days of her life, but with an open palm. If she doesn’t believe you, press your thumb on that place in-between her eyebrows. Tell her to look from that place and she’ll turn fire into water.

She’ll try and go into headstand because she’s so happy but invite her to stay just how she is. Meet her gaze and place one hand on her belly and keep it there until it becomes like the belly she was born with.

You’ll look at her with her skin all wet and you’ll wonder how you’ve fallen so hard for a lady with a sweaty face. You will write the story of your lives, have kids with strange names and even stranger tastes. She will teach your children the difference between Chatarunga and Modified Chatarunga, when to lower your knees and when to keep them lifted. That every inhale is an opportunity to take in what you need, and every exhale, an invitation to let go.

Because a girl who practices Hot Yoga knows that things don’t stay one way forever.

That life is meant to strengthen and stretch and moments are meant to be lived fully, let go of, fully. 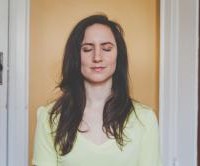 Sarah Brose is a Yoga Teacher and Theatre artist who is interested in exploring the links between Yoga and Art. She believes Yoga and Mindfulness create the space and stillnes… Read full bio