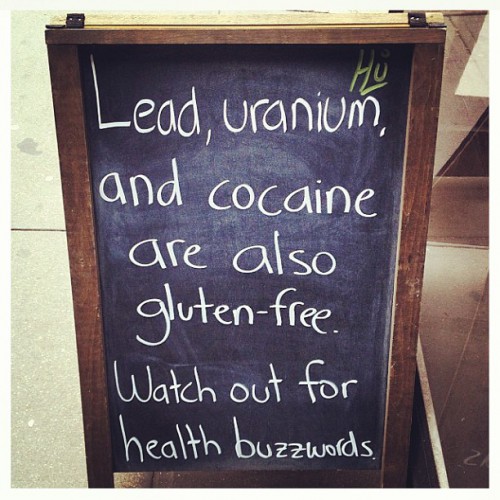 Many, many more perspectives here:

A Gluten-Free Treat to Start the Day. ~ Terri Tremblett

Link: 1% of the population has a genuine need. For most of the rest of us, we’re just eating processed, pricey, nutrient-light “wellness” products.

Here’s 8 Gluten-free Things that are Actually Bad for Us.

“If it’s packaged or processed — gluten or no gluten — it’s not as healthy as other whole foods you could be eating. The best gluten-free foods aren’t products at all; They’re fresh fruits and vegetables!”

When I was video host at Natural Products Expo West, recently, interviewing some of the newer GF companies, it felt like I was talking with a bunch of fad and money-focused business people—not foodies or wellness experts. I do like some GF companies that focus on health, not just GF. ~ ed.

Beware buzz-words. They mean something, but they don’t mean enough that we can turn off our critical intelligence.

Much of the general population’s newfound gluten-intolerance is, likely, psychosomatic—i.e., imagined. The point: eat healthfully, read labels, don’t follow fads or be a sucker for corporate hype claims.

It’s the same with organic. Folks think organic means healthy. It means something: but not necessarily good-for-you.

In a recent poll, 30 percent of adults said they wanted to “cut down or be free of gluten“…About 1 percent of the population has celiac disease…people who unnecessarily shun gluten may do so at the expense of their health, Tallmadge said…whole grains, which contain gluten, are a good source of fiber, vitamins and minerals, Tallmadge said. Gluten-free products are often made with refined grains, and are low in nutrients…[like] fiber, iron, folate, niacin, thiamine, calcium, vitamin B12, phosphorus and zinc. “There’s nothing magical about eliminating gluten that results in weight loss,” Mangieri said. Any of us that eliminates or removes cookies and candies from our diets, and replaces them with fruits and vegetables is going to feel better.”

1. Soda is Gluten-free. This is what one sip of soda does to your body.

3. Some gluten-free cookies: many are still bad for you. “just two of Glow’s cookies contain as much saturated fat as 10 McDonald’s Chicken McNuggets and more calories than seven Nabisco Ginger Snaps!” Some are pretty healthy. Read the labels.

4. Some gluten-free granola: the store-bought stuff is generally full of sugar and canola oil. Yum! “With 20 grams each of both fat and sugar, Udi’s granola resembles a dessert…”

5. Some gluten-free bread is all canola oil and eggs: read, fat and calories. And weight-gain!

6. Gluten-free bagels: “The listed serving size may be half a bagel, but don’t be fooled—few people will stop at half. To add further insult, Glutino’s also manages to pack in more fat per bagel than three scoops of Breyer’s Original Strawberry ice cream.” Jaw, meet floor.

7. Gluten-free Cake? Bad for you: “Tia’s “Totally Healthy” cake contains as many calories as 8.5 Fudgesicles, as much fat as 3.5 McDonald’s Hamburgers, and more sugar than 10 feet of Fruit by the Foot candy.” How would you look with 15 extra pounds? Eat a couple of these a week and you’ll find out.

8. Gluten-free soups…are often all “flour, butter and milk or cream.”

“…Many of us paying a premium to avoid gluten are doing so without any legitimate medical reason.

Bonus: If you can tolerate gluten, this is my favorite kind:

For another pov: Slate.

Common Sense (look it up, it’s in your own head)