He Holds My Hand While We Sleep: Dreams, Desire & Yoga Nidra.

Lately, I’ve been experimenting with yoga nidra, or the divine sleep—an extremely powerful yogic practice for connecting to and manifesting your deepest intentions and heart’s desires.

This guided practice (you can use headphones to practice at home) takes between 20 and 40 minutes, during which you linger in the potent stream of your deep subconscious.

I’m loving this exploration—not only because I get to lie in savasana the whole time (!), but because I’ve always been fascinated by the power of sleep, dreams—and especially the mysterious threshold of consciousness that lies at the borderland between sleeping and waking. Yoga nidra helps us tap into the power of that threshold more gracefully during our waking lives.

My yoga nidra practice has made me especially conscious of my intentions, yes, but also my sleeping and waking practices in general.

For example, recently I have been waking in the night, which is something I never used to do. It’s strange, this coming to alert clarity in the watery dark of my bedroom. I discover things that would otherwise remain cloaked.

I notice the moonlight shining through the skylights above my head. I hear, in the resounding silence, the steady breath of our dog on his bed beside my husband, Jon and me. Those soft animal sounds mingle in the air with the deeper, slower sound of Jon’s breathing inside his chest, which is both muffled and amplified beneath his muscles and warm flesh and skin against my ear.

I discover the tender fact that Jon holds my hand in his sleep.

I love sleep. I love it in that same desperate greedy way we all love air and water—I love the delicious feeling as it pulls me under. The heaviness of it—and, at the same time, the lightness.

I have always been a good sleeper, except when I wasn’t—the nightmare years—more on that later. But for the most part, I’ve always slept well, meaning I conk out fast and sleep very, very hard. I’ve never needed sleeping medication, not even natural potions like valerian or melatonin.

In fact, until recently, I could gulp down a whole cup of coffee any time of night and still sleep like a baby.

Waking up, on the other hand, has never come easy. I dread morning flights because I can never really trust that I’ll obey my alarm, and on at least one occasion, I didn’t. Bye, bye plane. And to be awoken by humans doesn’t always work out any better.

I’m embarrassed to tell you about the tender note I found a few weeks back, from my now grown children, Max and Lillie, written in Max’s finest square printing and Lillie’s hopeless scrawl, circa 2001, when they were eight and six years old.

We’re really, really, truly sorry for waking you up. We should not have done that. We promise not to do it again. Love Max.

And I promise too.

Such hand-drawn apology notes are rare in my shoebox of mothering memorabilia, so I must have been some terrible and scary imposter mother that Saturday morning when my children decided six o’clock was a perfect time for me to rise and shine (I vaguely remember—still guilty).

But at least I only yelled.

Far worse was the time my sister Laurie startled me from a sound nap when I myself was six years old.

Our mom had just pulled a batch of cookies from the oven and sent Laurie up the stairs to fetch me. She wasn’t gentle. “GET UP!” she yelled, two inches from my face. I smacked her hard across the cheek—just a reflex, really. I remember the stinging feeling on my palm after the slap. I didn’t get a cookie. So, I was robbed of two delicious experiences: a warm chocolaty blob of flour, sugar and butter—and that shimmering, half-conscious borderland I love.

As much as I love sleep, I love dreams.

I’m certain they’re more than snow on a television screen, random images picked up by a skittish satellite dish. They’re maps of our inner world, songs composed by our deep unconscious, symbols straight from our hearts. I know I’m not supposed to interpret my dreams literally, and I’ve never had a clearly prophetic dream (except once, a random and decidedly not profound one about buying new shoes).

But I still believe dreams have meaning.

When I was six, in the first years of my mom’s second marriage to a violent man, I suffered a bout of bad dreams. I came up with a system for coping: I mastered the art of lucid dreaming. I could change the course and outcome of almost any nightmare. Most vividly, I remember escaping assorted dangerous dream characters by turning myself into a girl version of Superman.

With a flap of my arms and a flip of my cape, I’d chase the scary villains from my dream territory.

Later, in early adolescence, I hit another patch of nightmares in which I was unable to walk.

Often, these torturous dreams would begin with me in the long, dark, basement-level corridor that led to the locker rooms and gym of my junior high school.

I’d enter a ominous fluorescent haze of a passageway surrounded by throngs of other noisy, shoving, cologne-soaked 12-year-olds, when suddenly, my legs would turn numb and heavy. I would struggle with all my might to drag each leaden foot in front of the other. Kids would shove past either side of me, their shrill voices echoing off the painted concrete-block walls of the tunnel as I slogged forward inch by inch.

I had lost my talent for lucid dreaming by then, and my only escape was to wake up.

By high school, the paralysis nightmare changed form. In this terrible new version, I would lie in bed, immobile, conscious of my sleep state, but unable to wake myself—semiconscious, but powerless. And in keeping with the theme, paralyzed.

I no longer encounter the paralysis nightmare in the alleyways of my nightscape—not for a couple of decades. Now, when stress explodes in my life—a gnarly sumac bush overtaking a side yard, a few fern-like greens one day, a monster out of control the next—I succumb to chase dreams.

Sometimes, the bad guys are chasing me to a certain death and sometimes burglars are in my house and I am frantically looking for an escape or a hiding place. These dreams are rare, but when they happen, it’s a miserable bath of heart-pounding adrenaline.

Even in spite of my sporadic forays into nightmares, I still love dreams. And of course, sleep.

And I love—maybe best of all—the borderland between sleep and not sleep that I visit when guided with yoga nidra and also on my own.

This ephemeral space of suspended reality is our portal to mystery—yoga nidra allows us to linger for more than a fleeting moment in this half-state.

Outside of yoga nidra, memories of this sleep’s threshold are ephemeral. We sleep and we wake; the transitions dissolve into amnesia—the same amnesia into which our dreams slip and disappear.

Except on those rare occasions when it doesn’t; when we break through the surface and see it all clearly.

When we wake in the night and find our hand clasped lightly in the hand of our lover. 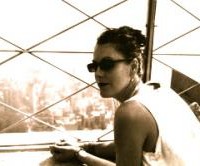