How Writing May Change You in 5 Steps. ~ Tyler Lewke

Gustave Flaubert, regarded as one of the best writers of the 19th century once said:

“The art of writing is the art of discovering what you believe.”

I’ve been a writer for as long as I can remember. But writing wasn’t an actual craft—a rigorous constant practice in my daily life until this last year.

Exactly 323 days ago (depending on when you read this) my friend and I began a sacred journey together.

He left town for a 100-day silent retreat; he dropped everything, turned off all technology, paid all his bills in advance and dialed out of the mainstream consciousness—he entered deep silence and remained within it, nearly all alone for the whole time (although he did say fuck inadvertently once when he fell off a ladder).

He didn’t read, didn’t watch TV, didn’t speak to anyone and slept outside on the earth as much as possible.

He designed and followed a daily practice and schedule of deep inward exploration.

I wanted to join him but was compelled to be “in retreat” without leaving my daily life.

Together we created a plan for me to commit to for the same 100 days…I don’t remember what it all entailed—just that I failed at every single one of them other than writing.

At the core of my commitment was to write every single day.

When he returned, in recognition of my failure and as a penance to myself, I decided to keep writing just a little longer.

Some days I only write two sentences, other days I write a short novel.

Sometimes, it’s literal emotional puking. Other times, it’s a connection to a deeper wisdom that surprises me and reminds me of what I have access to if I really open up and get still.

Occasionally I look back and read something—I’ll randomly pick a day, and observe who I was versus who I am and notice how I’ve grown.

Over the longer time now, I can see the patterns—the emotions that repeat themselves, the areas that I get hung up on.

I can even see triggers…like if something happens on this day, within a few days I can notice the shift in my tone and cadence, the influence of whatever happened.

This has been an enormous gift—it’s exactly what Gustave said, I am finally discovering what I believe.

This discovery is the most amazing treasure—it’s as if I’ve found a road map for my life—by knowing what matters and what doesn’t, by understanding what I actually believe in versus just living for whatever…man, it’s literally priceless.

I’ve shared this experience with people and they often remark how they’ve started countless journals, never fully expose themselves, never stick with it, never find that totally honest voice within.

Repeatedly I hear, “I can’t do that.”

To that, I say, bullshit.

Here’s how I did it:

1. One word at a time, one day at a time: I have several days where all I wrote is:  “I’m too tired to write.” Somehow, having to write that more than a couple times is just so lame, you compel yourself to keep going and dig deeper. Making the commitment to never miss, no matter what, it’s seriously necessary for a guy like me.

2. When you do miss, which you will, start again, immediately: I fell off a horse once and the crazy woman at the barn literally forced me to get back on so that I would learn the power of commitment and to overcome my fear. It works when you work it. No excuses. Go. Fall. Go. Fall. Eventually it’s more go, less fall, I promise.

3. Keep going, especially when you have no idea why you’re doing it and you see no benefit: I think this is the moment that is the most sacred. To practice setting aside judgment and expectation is really hard. But, if you write and open yourself up long enough, you’ll let go of wondering what it’s for, what good it’s doing, and you’ll just keep going. Then one day when you least expect it, the fruitage will come tumbling out and the benefits will be amazing.

4. Use passwords: Let’s be honest. And being honest for me means total privacy sometimes. I would not say exactly how I feel unless I felt totally safe because honestly I often sound totally fucking crazy and nobody but me needs to know exactly how nuts I can be.

5. Keep it simple: The only reason I’ve been able to make a commitment as rigorous as this is by keeping it totally simple, no rules, just write every day. Even two words. I tried to commit to 15 minutes a day and what happened was some days that felt like a lifetime and other days it felt like 4 seconds—so eventually I realized—just write. Technology for me is the only way this was possible. I use evernote and it syncs to my phone, my ipad and my computers. No matter where I am or what I’m doing I can write. And it all works in harmony, instantly. No excuses, ever.

So, I repeat his profound words again:

“The art of writing is the art of discovering what you believe.”

And I add my own:

This article has been adapted from the original which can be found here.

Tyler Lewke tried the simple life, it wasn’t for him. Instead, he’s an unlikely CEO and hard core believer in spirit at work. He’s irreverent and adventurously kind, committed to conscious living and helping wake up the world. On any given day, you can find him hiking the pacific coast, writing his daily blog, or in a board room in the Midwest redefining business as usual. Contact him directly at [email protected] 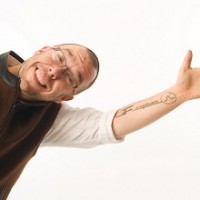