Why We’ll Never Be Good at Yoga. ~ Julie Bernier

As a yoga teacher I hear this all too often. I tell these doubters that any scale of proficiency or talent is completely irrelevant. They look at me skeptically, and say something like this: “But I can’t even touch my toes!”

I persist: it doesn’t matter.

You can not be good or bad at yoga.

It’s a shame that so many people are discouraged from doing yoga because they think they’re “no good.” Or they believe yoga’s not their bag because they’re not flexible. That’s so far from what yoga is all about.

I was a perfect example of this state of mind. I’m a woman with tight hips and no natural bendy-ness. I used to feel disdain for myself when I saw other students at ease in full lotus; meanwhile, I struggled to be comfortable sitting with my legs crossed.

Forget any advanced yoga postures: my ego told me I wasn’t and never could be good at yoga because my body had its limitations. Fortunately, I trudged on. At this point, though, many others often abandon the practice entirely.

Now I know better. Now I know that you can not be good—or bad—at yoga.

Yoga’s not about talent.

There’s no competition—not with others, and not with yourself. Just because you can do some crazy arm balance doesn’t make you any better than the next guy. There’s no point system. No timer. No one keeping score.

When it comes to  modern American yoga, we’ve gone astray. We get all wrapped up in the physical side of yoga: we’re impressed by or jealous of other students, then chastising ourselves for our tight hamstrings and stiff backs, and thinking that if we can’t do a handstand we’re somehow yogic failures.

In ignorance, we believe that the goal of yoga is to contort our bodies like pretzels. We think that if we can’t, we’re not very good. In the worst case scenario, our self confidence is down, we’re intimidated, and we’ll give up on our practice altogether—and miss out on one of the greatest tools for growing ever given to humanity.

It’s the ego that’s made up this whole ‘good or bad at yoga’ thing based on how “advanced” we are, and ego is precisely what yoga tries to tromp. Ego ties us to the physical body. Yoga is a tool to transcend the physical body.

There is a physical aspect to yoga. But it’s not meant to encourage us to dote on our yoga butts or chaturanga arms. It’s meant to create a healthy vessel for the soul—the whole “your body is a temple” concept.  Learning stillness in yoga postures translates to finding stillness in meditation, where we expand our awareness.

When our awareness expands, we deeply understand that we are far more than our physical bodies. Herein lies the goal of yoga: uniting the body, mind, and spirit.

Leave the ego out of yoga.

Don’t judge yourself as bad or good. Don’t compare yourself to anyone else. Acknowledge where your body is without criticism, and then move on. Know that yoga is not about talent or competition with yourself or anyone else, but a practice meant to guide you far beyond all that. 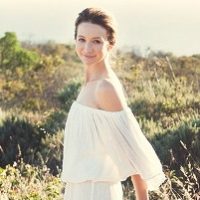