A Heartwarming Lullaby that You Must See to Believe. {video} 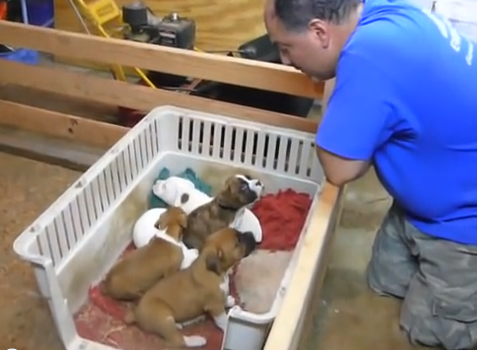 “Golden slumbers kiss your eyes / Smiles awake you when you rise. / Sleep, pretty wantons, do not cry, / And I will sing you a lullaby.”

There is no disputing that lullabies have been around since ancient times all over the world.

Usually lullabies are used as a sleep aid to get infants and young children to sleep. And studies have shown that these hypnotic and repetitive songs work and are surprisingly similar in tone and metre no matter where one is being sung on this earth.

I find it so incredible that these sweet bedtime songs are known to mimic the rocking patterns that human babies naturally experience in the womb.

But who would have dreamt that a human lullaby would work on a litter of puppies? I would not have believed it unless I had seen it for myself! And every time I find out about yet another fact that proves just how close humans and other animals are in spirit and emotion, I feel a swell of awe and kinship fill my heart.

Watch as this charming man croons these adorable puppies into dreamland with a classic song that has been sung so beautifully by so many before him—Goodnight Sweetheart.

A Puppy Can Change Your Life.