In Defense of Selfies. 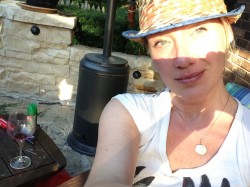 Me above, pictured in a sefie in my back yard last summer; straw hat, empty wine glass, sun going down.

Back in the day, no one had cameras.

If we did, they were expensive, cumbersome and loaded with film, which had to be taken to the drugstore and developed (by the clerk, who would see, and judge what we photographed—check out Robin Williams’ creepy performance in One Hour Photo and you’ll see what I mean) for tall cash, which most of us didn’t have either.

We’d pay $30 bucks for 24 glossy frames that all sucked, but we’d already bought them so they were ours to keep.

Only important people like models and rock stars got to have really cool pictures taken of them, making the rest of us feel like the ordinary, uninspiring folk we were.

I longed to have just one decent picture of myself—not in a family Christmas card (though I would’ve accepted even that), but of me: young, proud and, I hoped, beautiful.

Unfortunately, I am not not all that photogenic—at least I wasn’t back then.

Few were. It was the 80’s for God’s sake; the hair alone made most of us look like our heads were trapped in thicket of poison ivy. Throw in the clothes; pleated and tapered acid wash Z. Cavarrici jeans with a neon shirt that had a triangle on it somewhere, and you had a whole generation of photo bombs—and I don’t mean people popping up on the background of an otherwise awesome pic.

No longer are great photographs reserved for the upper echelon—now they are accessible to anyone and everyone. And evidently I wasn’t the only person dying for this to happen. Based on the number of pictures people are posting of themselves, I’d say 90 percent of the population has the same deep wish as me: to look into our own eyes and say, “Hell yeah! I’m not plain or boring. I’m fantastic, dammit!”

The process has been vastly simplified by the advent of smart phones. Now, not only do we not have to buy a camera and film and prints, we no longer even need a photographer. Just look at your phone, tap the little arrow, and smile. Don’t like what you’ve got? Delete! Try again, different expression, different light.

Yes, it’s vain. Yes, lots of people over-do it. And yes, if I see one more selfie taken while sitting in the car with the tell-tale seat belt, I might poke out my eyes with a pencil (although I do understand that being in the car alone is a whole other liberating circumstance in which songs can be sung, invisible drums can be played and fabulous photo shoots can transpire with uninhibited glee).

And I admit to feeling guilty and indulgent when I take my own selflies. It’s like, really? Don’t I have anything better to do with my time than take yet another picture of my 43 year old face?

Maybe it’s okay that I want to see myself as others see me, or see myself in what I consider my best light before that light fades entirely. No one vilifies us for looking in the mirror (unless we walk around with it perpetually one inch from our nose)– what is so wrong with taking an occasional interest in the fascinating face that is our own?

I recently saw a You Tube video from Dove, essentially an ad, yes, but, like their Real Beauty campaign, it struck a chord. It depicted girls who had been given permission to take selfies in the name of an art project, and have those selfies blown up and displayed in an exhibit where the viewers were encouraged to write positive feedback on Post It notes. I found it deeply moving.

Here were these ordinary girls, with the same insecurities that we all have, putting themselves out there unapologetically and being received with kindness.

Not unlike posting a selfie on Facebook and having all your friends tell you how gorgeous you are—even if you are in a gross sweatshirt in the front seat of a car with the seat belt cleaving your breasts in two, (although I know that some people get the opposite reception—generally teenagers, I expect—but I’ve culled my Facebook friends down to a group that actually like me which, incidentally, I highly recommend doing), this round of applause just for us feels nice.

It’s nice to hear that we are beautiful.

It’s nice to be proud of who and what we are. And it’s nice to add to the ever growing platform of myriad beauty that has only been made possible by the personalization of technology.

Nothing is without its downside. And I don’t think selfies are going to fix what ails us. But I do think they are a great way to own our visual identity, to turn our unique, unabashed faces to the world and say, “Here I am. It’s a beautiful thing to be me.”