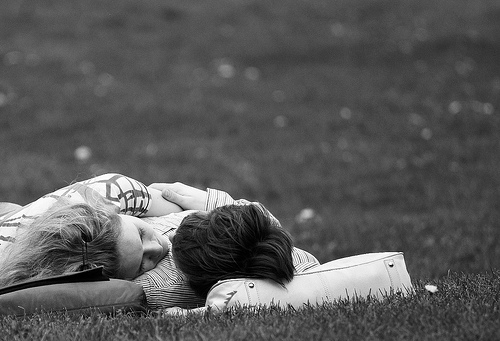 When you met me, I was a hot mess.

I’d come to accept my terrible life as unalterable. I’d let myself be taken apart piece by piece by a relationship with a very bad man. Once a nice, ordinary girl, now I was on the fringes, a dancer, a “an abused woman” (how I hate that term), living in a dilapidated apartment with a roof that always seemed moments from caving in, but for which I was grateful, because it was better than living on the street—and I knew, because I’d done that too.

That’s not what you saw—you always said you knew you loved me from the moment we met.

We first crossed paths in the club where I worked. You came in with a friend for a bachelor party, or something stupid like that. We spent that whole night talking, strobe lights picking out your oddly blue eyes for a split second (eyes that would be reinvented in the face of our son) and then plunging us back into darkness.

When you told me you had five kids, I laughed; I honestly thought you were joking. But you weren’t and I think of that conversation as their birthday to me—the day I became aware of their existence, a handful of souls with whom my life is now inextricably intertwined, squeezing impatiently into all the corners of my heart.

I wouldn’t go out with you and I wouldn’t tell you why—I didn’t want you to know I was married. After six months of being put off, you decided you’d had enough. The next time you came into the club, you had a beautiful blonde on your arm. I ran upstairs and hid in the tanning bed and sobbed.

Later, you would tell me that was the day you knew I loved you back. You explained that you’d gotten the idea for your little ruse from the Thomas Crowne Affair, where Pierce Brosnan parades another girl around in front of Renee Russo to find out if she really cares about him like she says she does.

Every time that movie happens to be on for the rest of our lives, you will turn to me with a smirk on your face. I don’t mind—you were right.

Once the truth was out, everything changed. We knew we wanted to be together; the only question was how to extricate myself safely from my marriage. Several clandestine (delicious) meetings later and we decided I needed my own place. The problem was, my husband had destroyed my credit. So you did the first wonderful thing in a long list of wonderful things you would ultimately do for me—you sat down in an apartment rental agency and co-signed a lease so I could be free.

The day I moved in to my new apartment, I discovered you had already been there and had stocked the place with plastic utensils, paper plates, toilet paper, a couch, an answering machine and more. I’d never thought of plastic forks as romantic, but as I stared at them neatly piled up in that drawer, I realized, they can be the most romantic thing in the world.

When I went to put a greeting on the answering machine, I saw that there was already a greeting recorded. I hit the button and Cheap Trick tumbled out, “I want you to want me…I need you to need me..” Our song—our cheesy secret song. Better than a million roses.

From then on, you were my hero.

You faced down my ex when he came to my new place, trying to scare me. You took me to the police station when he threatened me and helped me get a restraining order. You stood by me in court when we had a hearing with a judge about dropping the order or maintaining it, and unbeknownst to me, excused yourself to have a word with my husband who was slinking around outside in the hallway. You told him you were going to marry me, and that we would drop the order if he disappeared and didn’t contest the divorce. I believe you also offered to take him out back and show him what it’s like.

He accepted the first offer.

I only saw him one more time after that—at my divorce hearing, where he signed a bunch of papers looking like a beaten dog. About 10 years later, we would discover he had died from a drug overdose at his mother’s home in Canada, where he was deported after several run ins with the law.

I can’t believe it’s been 15 years since I first laid eyes on you. You still grin and turn up the radio when Cheap Trick comes on. You still buy me toilet paper and paper plates—and sometimes you even buy me flowers, too. Sure, they’re from Aldi, grabbed last minute on your way to the check out counter, but I know your heart is in the right place.

As they say, from the mud, the lotus will grow. We certainly started out in improbable circumstances. But look at us now, my love and all the fine things that we have cultivated.