The Brilliance of Ahimsa: How a Cockroach Can Save Humanity. ~ Dina Omar 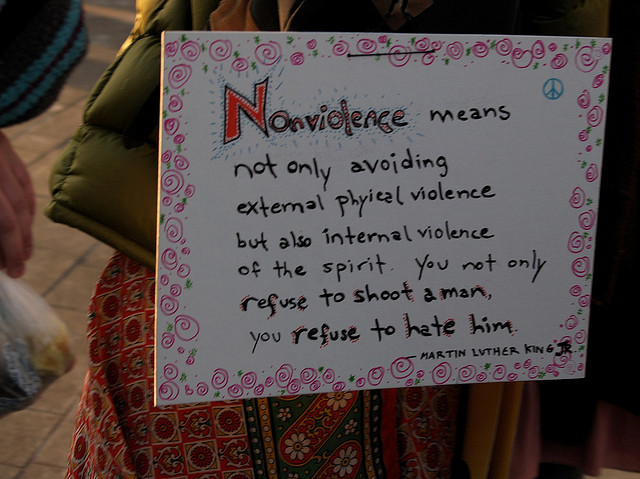 Ahimsa is a Sanskrit word that’s translated as non-violence, non-killing, or non-injury.

It applies to all living beings, including ourselves. It is the very first principle of the Yamas (principles of living, or moral rules) described by Patanjali in the Eight Limbs of Yoga included in the sutras.

I’m going to go out on a limb and say that there’s so much violence in the world nowadays.

We see it every day. In the news, in the streets, in movies. We see it when we watch the horrific videos on YouTube about atrocities such as the ones committed daily in Syria. We hear about it in the constant news focused on war and terrorism.

We don’t have to go very far. It’s right in front of us—it is what’s happening in our country. We see it in the violent demonstrations, wild protests, bombings, mutual brutality, and the incessant stream of hatred and anger.

Violence can take many forms. It may be verbal, such as abusive insults and belligerent tirades. Or it may be physical, such as attacking, beating and causing serious physical harm. In extreme cases, it may even lead to death—as in wars, violent riots, and genocide.

Most of us ask ourselves, “How could human beings do that to each other?” Surely we couldn’t do that to another human being, right? Surely those are sick people, evil people, insane people. We find reassurance in the thought that “we are not like them!”

But is that really true? Are we so different from the others who have committed violent and brutal acts throughout history? Were all those people simply insane—monsters descending from a completely different species?

The tragic fact is that we can do harm to other living beings on a smaller scale. Numerous studies and experiments in the field of social psychology have shown how normal, “good” people can (and do) commit violent brutal acts in specific circumstances. Sometimes they do it out of fear. Other times it’s out of blind submissive obedience.

But perhaps the most pernicious root of violence is something called linguistic dehumanization. This a term that James Weller coined in one of the most interesting books I’ve read, “Becoming Evil,” in which he talks about cultural cruelty and horrific violence. It’s the element that you’ll invariably find whenever there’s war, genocide, ruthless murder, or other mass killing.

Linguistic dehumanization can be defined simply as labeling a person (or a group of people) as something less than human. After all, it’s very difficult to kill a human being. But you’ve probably squashed a mosquito, or stepped on an ant, or killed a cockroach.

Don’t believe that thinking of someone as “less human” can make it easier to violently hurt them, or even kill them? Then you’d better think again!

In the Rwandan genocide, the Hutu referred to the Tutsis they slaughtered as “cockroaches and insects.”

The Nazis considered Jews to be “rats and parasites.”

Muslim radicals call any one who opposes their beliefs “demons” and “enemies of God”—and of course, vice versa, they are called “sheep.” You get the picture.

So while it may sound overly simplistic or trivial, social psychology makes it clear that the process of linguistic dehumanization, coupled with the relative ease with which we can cause harm to non-human beings, has been one of the most insidious causes of violence in our lives.

So it’s really no wonder that Ahimsa—the principle of non-harm and non-violence towards all living things (both human and non-human)—comes in the first rank of the Yamas. It may well be that the ancient yogis gave us this basic yet powerful principle because they saw the need for us to refrain from violent acts—not just toward ourselves, but to all other beings as well.

The practice of Ahimsa can be very challenging and overwhelming. It needs to be practiced on all three levels: mental, verbal and behavioral. The common way to start is by refraining from harming any living creature, to develop the wisdom and understanding that every simple living being has as much right to live, and live well, as we do. In the same vein, since our thoughts are the root causes of our words and actions, a great place to start would be with our minds—by watching our thoughts and the meaning of our words.

Ahimsa is not a practice of something intangible, such as using love and peace to refrain from the drive to harm others. Rather, its first step is the conscious and intentional cessation of violence, on all levels, to bring about peace and harmony.