The Problem with Tiny Houses. 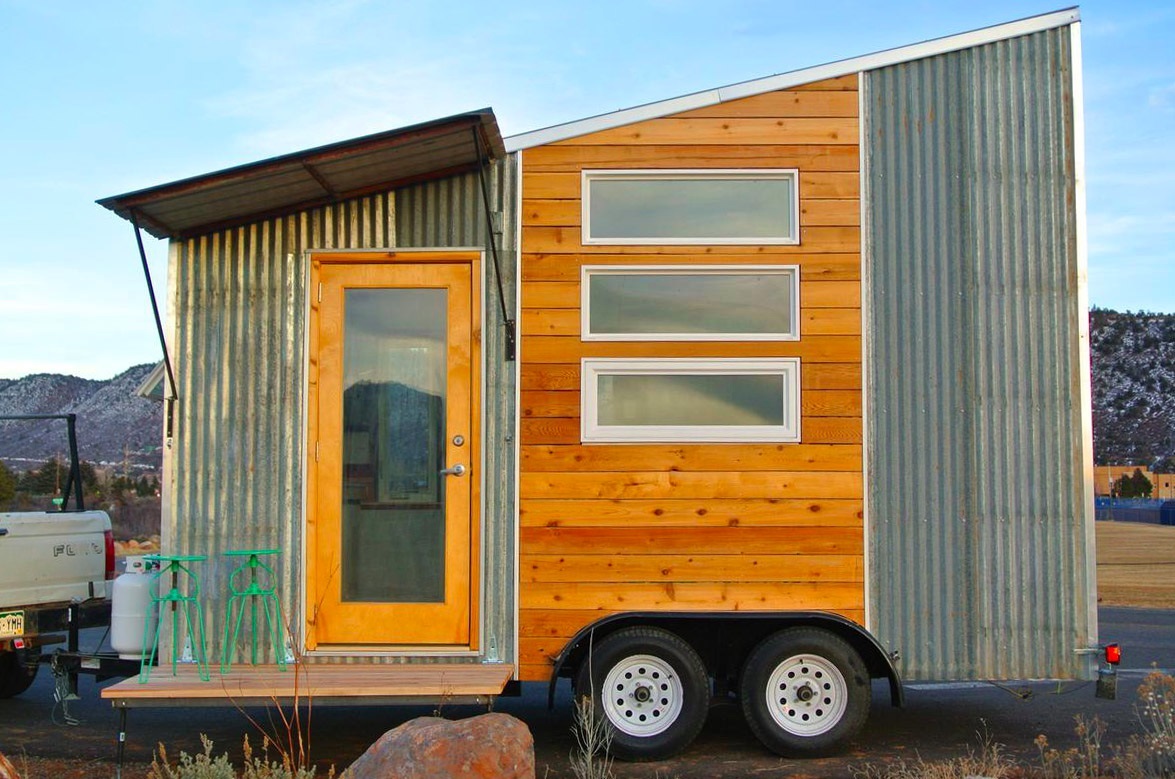 The house as he describes it offers about 120 square feet of space, not including its loft. It has all kinds of neat-o features, like a beetle-kill dining table; light fixtures made from old salsa jars; vinyl windows; some funky stairs, and an aromatic cedar counter-top.

The house sits on a two-axle trailer (many tiny houses are built on wheels to bypass housing codes and residential covenants such as minimum house size, conforming to egress, etc.) It’s wired to be “grid-tied”—meaning it needs to be hooked up to a city’s electric, water, and waste systems—and comes with no couch, heat source, or toilet. The buyer has the option of choosing those.

“The Tiny House movement is grounded on the basis of simplifying one’s life, owning a simple yet comfortable shelter outright, not having a mortgage, having the flexibility to move the house around, and I would add, being more in touch with one’s surroundings,” Durango Guy says. “If you are familiar with the Tiny House movement, you shouldn’t have any doubt that Tiny Houses are one of the most ‘green’ ways of living that currently exist.”

It’s easy to feel a kinship with Tiny Houses.

Ronald Reagan laid the foundation for the Tiny House movement nearly 30 years ago. The Tax Reform Act of 1986 encouraged homeownership and mortgage debt in place of consumer debt through incentives like the mortgage interest tax deduction, and the ability to borrow against home equity.

Houses became banks, and Americans started building them bigger than ever before. The availability of riskier and riskier loans made it easy for anyone to own a house, stimulating demand. By 2000 houses were an obsession. Home prices were rising at 10% annually*—so was square footage—from less than 1500 in 1929 to nearly 2500 in 2010**. Square footage per person more than tripled—from 290 in 1950 to 927 in 2010—as families shrank in size and houses grew***.

At the same time, household income for middle-class Americans flattened. Between 1967 and 2000 it rose less than half-a-percent annually*, and between 2000 and 2012 declined by about nine percent.**

The net effect was that the nation became house rich and cash poor.

When the economy exploded in 2008, overstuffed McMansions and their mule-like owners, saddled with stuff and debt, became symbols of the crumbling American Dream. Cue the clamor to reduce.

But do Tiny Houses like Durango Guy’s really deliver on their promise? His is built from mostly new parts, at a cost of $227 per square foot.

To be functional, it requires a grid of new infrastructure: a cheap lot somewhere for an additional $100,000; a well and septic system for $50,000; a minimal solar set-up or plugging into the city’s electric grid for several thousand. Plus it needs a truck to haul it—another $10,000. Of course, he could dock at an RV park and use their “grid,” but that would make the house nothing more than a $37,000 RV.

It’s also worth asking whether 120 square feet of space is livable in the long term.

Analyses of square footage per house, divided by country, indicate that people can be comfortable with much less than the current US average of 2300***, but even Hong Kong, the smallest at 484 square feet* per home, is four or five times the size of the Tiny Houses that attract so much attention today.

It seems people the world over find it uncomfortable to live permanently in a truly tiny house, especially if they expect their lives to include spouses, children, or even pets.

There’s a big difference between a “not so big house” (to borrow Sarah Susanka’s phrase) that meets residential code and is designed for sustainable long-term living, and a 120 square foot trailer. To me, this makes Tiny Houses like Durango Guy’s luxuries. They’re more likely to be second homes or studios than primary residences.

Discussions of quality, price, or the “right” number of square feet seem to miss the bigger, and in my opinion, more important point: isn’t it cheaper, simpler and greener to buy something used?

I bought it in April of 2013 because the work I do often requires me to be in California. My RV is a Toyota Dolphin, built the same year that Reagan passed his tax reforms, on the frame of a two-wheel-drive Toyota pickup truck. It’s about 180 square feet, not including the loft, which holds the full-sized bed.

It’s quite simple: my RV holds a couch that folds out into a guest bed; a two-person dining table; a little kitchen with a sink; a four-burner stove, and a propane-electric fridge. It has a shower, a toilet, and a bathroom sink. Two 100-watt solar panels provide all interior electric power, including outlets for computers and iPhones and water pump.

Gray and black water tanks capture all my wastewater, which means I don’t need to be grid-tied (although I could be if I chose).

I can park anywhere and be totally functional. Oh, and my RV came with a little four-cylinder motor, so I don’t need a truck to haul it anywhere. Motor, solar panels and all, it cost $4700, giving it a cost per square foot of $26.

With the exception of the solar panels, which I installed, my RV is 100% reclaimed. Its parts are all original.

This is important to me because it means I didn’t consume anything new to create the living space and actually saved something from the landfill.

The same can’t be said for many Tiny Houses.

Drive anywhere in the west and you’ll see the carcasses of old RVs and trailers dotting the landscape. Browse any real estate website and you’ll find old houses no one wants. Some are in working shape or could be made to work with a pretty small investment and a bunch of used parts from a resource yard. Of course, those things don’t have the media appeal or cool factor of a tiny house.

There’s a quote I love from a book called A Pattern Language:

“When you build a thing, you cannot build it in isolation. You must also repair the world around it, and within it, so that the larger world at that one place becomes more coherent, and more whole.”

If you believe, as I do, that the world faces a crisis of consumption, the real work is in repairing and reusing what’s been broken or thrown away. That seems to me a simpler, greener, and ultimately cheaper choice than buying something new—even if it’s small.