Cats: Kings of Being in the Moment & Capable of Changing Our Lives. I have extolled the benefits of quality time with puppies, dogs and other species that make an imprint on my heart and create an entirely new perspective of thinking, seeing and feeling. Well, how about cats?

The furry, fuzzy, independent qualities of these empathic beings causes my own body and mind to slow down, take a moment, listen to my breath and engage in the silliest forms of cat play that I have ever experienced.

I don’t own a cat. I occasionally take care of a cat, and I can sit and write and witness my meandering thoughts while this lovely beast purrs and ambles about in an incredibly peaceful manner.

The universe must have known that I needed to take a bit of a break after a rather hectic time the last few months, as the original cat owners asked if I wanted to care for their young male feline while they traveled for a few days. It was yet another sign from the heavens that what I need is always taken care of.

And in this case, I needed to clean out the noise in my brain, lift my spirits to new heights, soak in the warmth of the days with the beginning of a new book to read, and catch up on mundane stuff that tends to slip through the cracks when I’m too busy being busy.

There is nothing glorious and noteworthy about being busy.

It happens when it happens and I ride the currents and stay as on top of my life as much as possible. But, spending time with this cat is showing me a unique side of life’s simple pleasures.

Mercury is out of retrograde (thank god) and other watery planets have taken over, while other significantly larger planets are dancing in the heavens with their own retrograding, and I’m allowing it all to soak in, this time with a cat.

My own cat experiences are somewhat slim, but I have had the pleasure of being around several feral cats, one of which adopted me for a spell a few years ago.

Black as night, intoxicating green eyes, and the slender body and moves of a gymnast, that mysterious cat roamed in and out of my apartment for a solid year. To resist it was futile, so I caved, bought it some wet and dry cat food, litter, and puffed up the yoga pants and t-shirts on my shelves in the closet, in case it needed a cozy place to hang for the night. No such luck.

The black feline—I could never tell if it was male or female—exited and entered my apartment whenever it felt like it, never used the litter box (I learned this the hard way, as the black and soft fuzzy creature decided to spray all over my shoes and other clothes in the closet), and ate meager amounts at intervals I could never keep track of. He or she most likely thinned out the nearby bird and mice species on a natural and nocturnal basis. Either way, that black small cat was a life changer on many levels.

Currently, I have a mother white feral cat living in my apartment building with a kitten in tow. She teaches it to hunt, to play, to sleep, to climb trees and to be respectful of the mother’s needs to rest. She coils around it and cuddles the small white kitten during the cold spells.

I often watch her for hours while I stare out the window daydreaming of my next creation on paper. It is mesmerizing at best, and gives me the impetus to notice that time lapses so slowly when doing so, with a big emphasis on awareness.

Cats are kings of being in the moment. 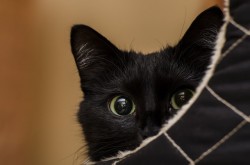 I’m caring for another black cat, only this one has white markings on his chest and paws, loves to play with a red laser light that I control like a flashlight, finds random flat boxes to climb into, lets me know when he’s hungry, eats only tiny amounts at a time, caresses me during sleep, senses when I’m not fully peaceful and darts around for some unknown reason to play.

As I sit here in solitude, I am in awe of this male cat. His intuitive senses are heightened at the most opportune times, and I watch his eyes drift in and out of sleep, with his whiskers standing on edge out the side of his face. He is absolutely beautiful. Even taking a small treat from my fingers is a gentle experience. There is no need to grab and hoard.

This cat is thoughtful and purposeful.

Cats, whether indoors or outdoors, feral, or somewhere in between, can give us the utmost feeling of deep sighs of happiness and contentment. Some have successful relationships with dogs, others either rule the roost, or are constantly pursued by a larger canine.

I have often heard the most wicked cat fights casting a shadow over the night air. Whether they are mating or fighting for dominance, I am not privy to the language, and it is just as well. Cats have their own way of communicating and journeying through this world.

They do possess an air about them that commands respect, and I for one will give it to them. Cats are no more high maintenance than a dog, if given the opportunity to listen to their needs and be aware of their empathy and message.

I would happily and most contently agree.