Rosemary: So Much More Than Just a Seasoning! 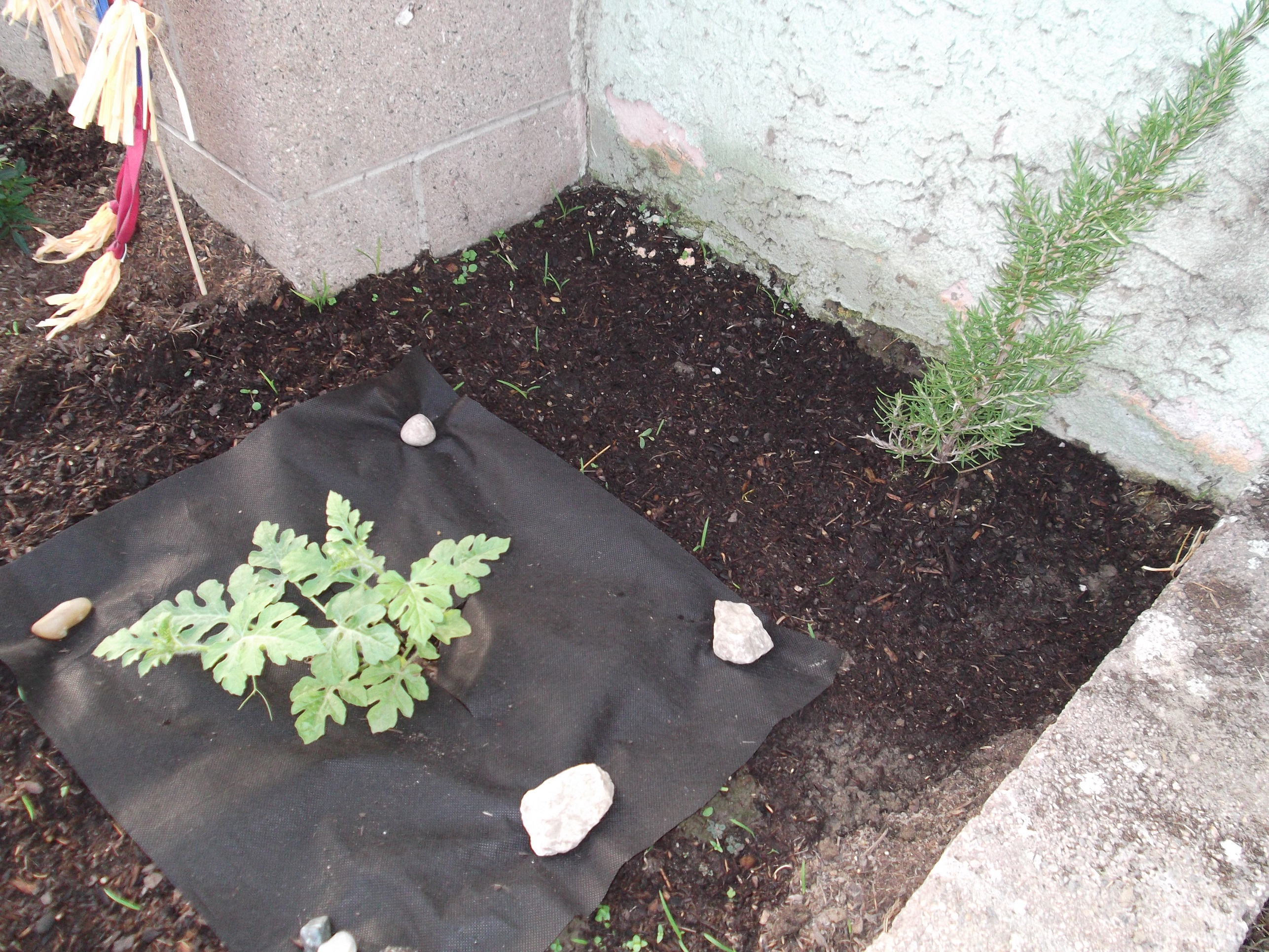 Shortly after moving our new home, my father-in-law gave us a small rosemary plant.

It was a skinny little plant, about 10 to12 inches tall. We planted it in the corner of an existing planter in the backyard, next to a small watermelon plant. The photo above was taken in the fall of 2011, shortly after we planted it.

The watermelon plant didn’t do very well. It did vine, producing leaves and even a few flowers, but eventually became infested with bugs that ate it away. The rosemary plant continued to grow, however, unaffected by the pests that kept ailing the other veggies we tried to grow.

After a few more attempts, it became clear to me that the pre-existing planter didn’t seem to provide the best spot for plants to thrive, so I stopped tending to it. Despite my neglect, the rosemary plant continued to grow and thrive.

Here is a photo of the rosemary now. 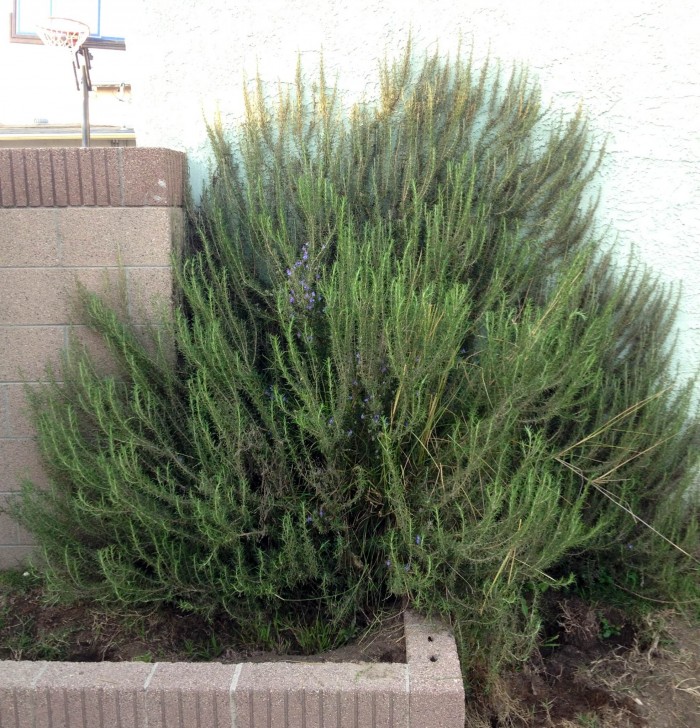 It’s grown tall and extended out as well, achieving bush or shrub status. I’d pluck a small branch or two occasionally for cooking, but I started to wonder if there was anything else I could use this bountiful herb for. I decided to do some research via ye olde faithful internet, and I learned some interesting stuff. It turns out rosemary has long been used for purposes beyond just seasoning.

A bit of background first: Rosmarinus officinalis is an evergreen herb, with needle-like leaves, related to the mint family of plants. Rosemary is native to the Mediterranean area, and so it thrives in warm temperate climates. (Like southern California, where I am.) It is a drought-tolerant plant, which is good, because as I said, I didn’t pay my plant much attention and rarely watered it.

Dew of the Sea—how gorgeous is that?

This “Sea Dew” is a source of iron, calcium, vitamin B6, and it is naturally rich in anti-oxidants. Anti-oxidants essentially deter cell damage, because they neutralize “free radicals” which are harmful particles that can accumulate in our bodies. Preventing cell damage contributes to a stronger immune system.

In addition to the immunity boost, rosemary contains anti-inflammatory compounds, which is why rosemary has been used relieve muscle pain and headaches. 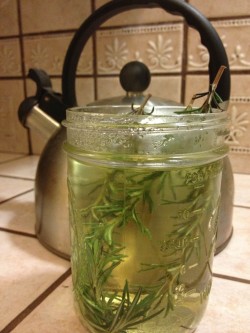 Worried about using too much acetaminophen or ibuprofen?

Brew up some rosemary tea instead! Pluck a fresh sprig or two (and rinse) before you toss the sprigs into a saucepan or directly into your mug. Bring water to a boil and let the sprigs steep about 5 minutes. (The longer you steep it, the more bitter it will become, so mind the time.) It’s that simple!

When you brew yourself a cup of rosemary tea, be sure to take a whiff of the steam coming off it as it steeps. Just inhaling the scent has been linked to improving mood and creating a better state of mind.

In that case, why not use rosemary as a natural air freshener?

Take some fresh sprigs and place in vases or jars in different rooms of your home. On cooler days, place some fresh sprigs in a saucepan, add some lemon or orange peel, cover with water and let it simmer of a low flame for a few hours.

The steam will evaporate into the air, freshening your home. Check in on it periodically, to make sure there’s still water present, and add a little more as needed.

For centuries, rosemary has also been linked to improved memory. In M. Grieve’s book “A Modern Herbal” she references “Doctor of Divinity” Roger Hacket’s marriage sermon from 1607, in which he states:

“Speaking of the powers of rosemary… It helpeth the brain, strengtheneth the memorie, and is very medicinable for the head.”

Modern researchers have determined that rosemary contains neuroprotective properties that may prevent Alzheimer’s disease and also the normal memory loss that occurs as we age!

Another age-old benefit of rosemary is its use to prevent hair loss.

Rosemary improves blood circulation, so when used on the scalp, the increased circulation encourages hair follicle growth. Rosemary can be used to combat pre-mature baldness or as a means of stimulating new growth where hair has fallen out. Rosemary has also been said to prevent pre-mature graying of the hair, or even revert gray hairs back to their normal pigmentation!

In addition, use of rosemary on the scalp has been cited as an effective treatment for dandruff and dry scalp. You can purchase rosemary oil to rub onto the scalp, or just make yourself a rosemary tea hair rinse. Bring water to a boil, then pour over several sprigs of fresh or dried rosemary. Let it steep 10-15 minutes (we aren’t drinking this one, so no need to worry about bitterness), let it cool and then use it on the hair as a leave-in rinse.

Tummy troubles? Besides being tasty, rosemary is said to be an herb that aids digestion. No wonder we love cooking with it! Issues with flatulence? Rosemary is carminative, which means it prevents the formation of gas in our digestive tract. Good stuff, right?

Rosemary can even be used as a natural pest repellent. The Sierra Natural Science website reads:

“Rosemary oil has been used for thousands of years against insects, and to protect food from molds and mildews. The main acid in Rosemary oil may have a repelling effect on the insects.”

I remember rosemary being mentioned as an insect repellent when I was reading up on companion planting for my garden. Rosemary is supposed to be an especially good deterrent of the Carrot Fly. When I grew carrots in a container, I placed the large pot right next to my rosemary plant. In addition, I cut a few sprigs and placed them in the soil between the emerging carrot greens. I was able to successfully grow carrots without any trace of the carrot fly or any other pests.

Unfortunately, the rosemary did nothing to deter my two dogs from sniffing out the growing carrots, digging up the pot and devouring every last morsel! (I’ve since moved my gardening endeavors to the front yard, away from the dogs.)

Is there anything this awesome herb can’t do?

Well there are some words of caution I found on nearly every website I perused—pregnant or breastfeeding women should avoid large doses or consumption of rosemary. 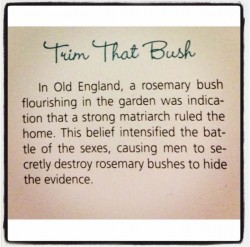 Therefore, I couldn’t help but chuckle when my (very irritated) mother shared with me that my dad had spontaneously taken it upon himself to dig up and remove the lovely rosemary bush that she had cultivated!

In “A Modern Herbal” M. Grieve also notes that:

“In early times, Rosemary was freely cultivated in kitchen gardens and came to represent the dominant influence of the house mistress. Where Rosemary flourished, the woman ruled.”

So men, I implore you—leave our (rosemary) bushes alone!

And finally, just for fun: this clip 🙂