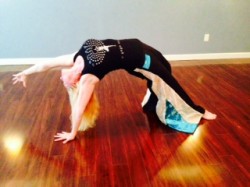 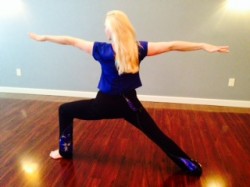 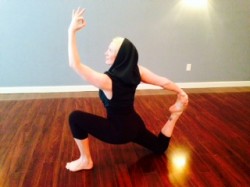 Americans throw away 68 pounds of clothing a year and buy only 10 pounds of used or recycled clothing in the same time frame.

You don’t have to be Stephen Hawking to realize that’s a lot of waste.

But here’s what makes me really choke up when I look at a stat like that: I’m a career offender.

All throughout my childhood, my mom made my clothes: Swiss dot pinafores, corduroy pants, matching jackets. At my youngest, this didn’t impress me one way or the other, but by the time I was in sixth grade all I wanted was the cheap  prefabricated trash everyone else was wearing to school.

It was the 80’s and Z. Cavarrichi ruled my world. I wanted to shop at Merry-Go-Round and Express and wear plastic earrings and rubber bracelets.

My mom did the best she could—buying a few things from the stores I loved, and making other things that (sort of) followed the trends. She was so meticulous, it breaks my heart now to think of the hours she put into making a single blazer—choosing fabric with me, and lining and buttons, trying to make it the most excellent garment I had ever owned.

And it was excellent. But it was handmade. And back then, that made it lame.

Fast forward to poverty stricken young adulthood when I was suddenly responsible for clothing myself and was still afflicted with a mad need to be trendy, and it’s easy to see where my bad habits were formed.

When I discovered the then little known Payless Shoe Source I thought I’d struck gold. It never occurred to me to wonder how they could sell shoes so cheaply. I lived in New York and specialized in unearthing stores like that, filled with stuff made somewhere in Asia that you could wear once or twice before it disintegrated. I combined those pieces with thrift store finds (which were more eco-conscious but again, that never entered my mind—I only bought them because I could afford them), and that made up the total sum of my wardrobe.

When I became financially solvent, little changed. I still loved a good bargain and the price tag—rather than the quality or the origin—of a garment, was my prime concern.

The one thing that was different was that I was buying more, and my closets became packed with more clothes than any one woman could wear in a lifetime. Being an organized person, I habitually cleaned out and donated items from my stockpile, but the fact of the matter is, I had not been wearing clothes as I try to live my life, i.e.; consciously.

And then I received a special gift.

A young woman I have never met named Domini Anne, who happened to read an elephant article of mine, decided to do something wonderful.

She made me a pair of pants.

She made me these pants, she said, as “an expression of gratitude, of kinship, call it what you will.”

Needless to say, I was blown away.

When the pants arrived, I opened the package eagerly, having no idea what to expect. Out tumbled the softest, most delicious fabric I could imagine, with seams and details which had obviously been worked in with meticulous care.

I slipped them on, realizing there was a little skirt built in, and slits at the bottoms of the legs which I could tie or leave open, adjusting the length and shape of the garment in any way I wanted. I smiled as I touched the silky fragments of Japanese embroidery sewn in strategic places and twisted this way and that to see if I really looked as good as I thought I did.

I wore them to teach yoga in that very night, and as I walked around the studio I noticed something—I don’t know how to describe it other than I felt loved.

I began to wear these pants much more often than I wore any of my others, and every time I did, I felt the same thing. I realized they were adding a level of awareness and gratitude to my teaching that was considerable– which is a pretty major accomplishment for a garment.

I proudly told the story of their origin to anyone who complimented them—which happened constantly—and tried not to worry about the day I would wear them out and had to set them aside, not that that seemed to be happening, but still.

I wondered, what would it be like to have all my clothes be this special? They would cost more, certainly, and I couldn’t afford as many of them, but so what? How many yoga pants does one person need?

In that frame of mind, I culled my drawers extra thoroughly, making packages of different things for people I thought might want them. Then I emailed Domini to see if she would make me more clothes. When my new pieces from her arrived; two pairs of pants, two shirts and one sleeveless hoodie, I knew there’d been a shift. I couldn’t imagine ever giving these things away or growing tired of them—they had heart and soul, not just style. I loved them more than all the other things I had combined.

Curious to hear Domini’s own thoughts about her work, I asked her to sum up her philosophy on sewing, and here is what she said;

“I’d like to improve the world by reducing suffering (eco-friendly fabric production, no sweatshops, no factories, all local manufacturing within 30 miles of my studio), but also, improving the state of humanity by allowing people to be fully present in their bodies, as opposed to squirming uncomfortably because their waistband is too tight, or the shoulders in their jacket aren’t broad enough, ultimately causing problems in the cervical spine.

When we feel uncomfortable, we get cranky, and then we make other people feel the same way.

I believe that in allowing our bodies to feel free, then people will also feel more free, and more inclined to act their best, as well as to be able to give their entire bandwidth to their life and not just shifting uncomfortably in their badly cut jeans.”

Domini has inspired me to cultivate a vastly different approach to clothes. I want to know where they came from, who made them and from what. I want them to reflect who I am and what I believe, to be beautiful and comfortable and above all, kind.

If you’d like to make a similar shift, you can find out more about Domini on her website.

Photo: the author photographed in some of Domini Anne’s apparel.