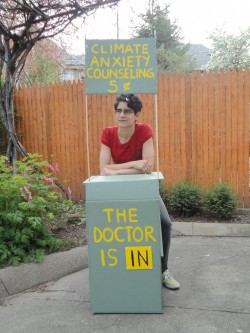 Who among us isn’t full-on creeped out by the plight of our environment? Well now, a momentary release is finally here. And cheap!

Kate Schapira, poet, artist, and full-time lecturer at Brown University in Providence, Rhode Island, has started something. For five cents, which goes, incidentally, straight to the Environmental Justice League of RI, you can pour your heart out, dump all your environmental anxiety, and be heard. She even takes notes.

Part of the magnetism of this project is the nerve Kate is touching.

If you have a brain in your head, you have repressed neurosis around this topic. Today’s grounded, intelligent reaction to the condition of the environment and our chances for survival is to hide under the table, maybe with snacks.

Look at the honesty Kate drew out from a passer-by, just by creating her safe place to talk. I took it from her blog, where she is documenting her sessions.

“I’m anxious because I feel personally responsible for this. I’m such a part of the system, how do I fight it? … We need to change the way we’ve been doing things for the past 200 years, and people with influence are not prioritizing it—other things seem more important. But this is pretty immediate …”

Kate appears regularly at Kennedy Plaza (outside Burnside Park in Providence, RI) with booth, paper, and pencil ready. She will be there Tuesday through Friday, 3:00 to 6:00 p.m., and Saturday 3:00 to 5:00 p.m., from May 13th to June 7th, 2014. If you’re anything like me (and I know I am) you will not be anywhere near Providence during those times. Follow the adventure on the blog, comment there or on the Facebook page and engage in the conversation wherever you are.

Asked how she came up with this idea, Kate said:

“It came from two places: Lucy’s “Psychiatric Help 5 cents” booth in Peanuts, which—as you may know—is often a little ambiguous in the help it offers. I liked the idea of semi-spurious authority combined with an attempt at direct connection. 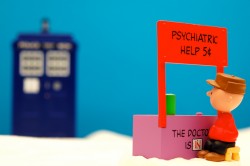 And then the other place it came from is feeling sad, scared and angry about the human depredation and disregard that is already hurting other humans and nonhuman living things, and is going to hurt them more.”

Sad? Check. Scared? Check. Angry? Check. Can what Kate is doing spill out to a greater audience? Not necessarily because we feel the need to change fix or do something, but just to sit with whatever our particular ailment is in response to what is happening—and be with it.

“I’m scared for the effects of climate change on the world I love. Rather than try to think about, save, or mourn for the whole world, I decided to think about my city and state, and the living creatures—including other humans—who share it with me.”

This is a new approach to the problem, and might alleviate some of the many adverse emotional effects we feel from wholesale planet plundering. It could also provide a bridge toward humanity understanding itself, don’t you think?

What color is your Climate Anxiety?

Mine is all over the spectrum. The brutal effects of factory farming and mass-production animal waste are right up there, for me. I will always have PESD. (Post Earthlings Stress Disorder. Ever seen Earthlings? Watch it and Bam, instant vegetarian.)

I think I have Acute Fracking Disorder too, one look at this site might give you the same unenviable condition. It’s actually very well done, the site, but just knowing that fracking is exempted from the Safe Drinking Water Act will give any thinking person the willies.

The last one I’ll mention is: I’m plain old freaked out about the whales, the elephants, and just extinction in general. Oh, and cars.

I have no idea why, but cars and gas consumption just give me full-bore intellectual disability on wheels. I’ve had to travel too much in my work. Call it Morbid Motor Mania. I haven’t had a car in years, and drove a grease truck before that, which ran on recycled vegetable oil from restaurants but gave me no end of trouble.

I’d like to get an Elio, but they don’t exist yet. I’m restoring a ’69 VW Bus, in the hopes that the magic embodied in the vehicle, the undead hope, might offset the pollution it will create. It’s kind of an emergency escape vehicle, and will double as a tiny house.

Enough about me, I could go on all day and half the night. Pick an earth-based trauma—I’ve got it.

Kate’s project has provided a platform for some interesting questions and observations. She noticed some discomfort about our behavior when confronted with the size of the problem, and a common, quirky response:

Pretty much everyone who says “I’m just one person” says it in a stupid voice, mocking a hypothetical other person—this has happened multiple times and I haven’t heard anyone say it seriously.

I love that people need to take on a mocking caricature to reflect on their feelings of impotence. We are so beautifully scared, all of us.

“I have a son, he’s turning three in a week and I worry about what kind of life he’s gonna have. “

“We’re supposed to be these great beings of light … We are the potential to change the world, only a few are in control and they have lied to us to get us to serve them. We all have to serve each other. “

“But if you start thinking of millions of us doing the same thing–thinking, what can I do today to prolong the life of the earth?”

“Do you feel like it’s weird that people aren’t marching in the streets?”

The project is fantastic because it is drawing people out on a topic we so often sublimate. There is real, raw fear in them thar hills, and at least looking at it is an act of courage. It’s a slap in the face to our default setting of denial.