So often, others feel helpless and confused when they learn that someone they know has a mental illness, but there is so much everyone can do to help and support those who are struggling. Because—and here’s the big secret—people with mental illness are—people.

And, like anyone, people with mental illness want and deserve:

This means a few things. For one, dignity does not mean pity. For another, never assume that “mentally ill” means “mentally incompetent.” Some of the most severely mentally ill individuals also happen to be some of the most intelligent people on the planet. I often think that it is life’s greatest curse to be intelligent enough to understand the intricacies of one’s own suffering but lack the ability to “fix” the problem with logic and reasoning.

This goes along with dignity, but in a slightly different way.

Although some mentally ill individuals are able to manage—and even hide—their symptoms quite successfully for surprisingly long periods of time, many are not. Many behave in ways that others label “odd” or “freakish,” and struggle with social isolation and the ability to form genuine, lasting relationships. In terms of how to relate and respond to someone who has a mental illness, the adage “be kind or be quiet” comes to mind, but I’d actually like to get rid of the “be quiet” part of that, because silence is a neutral placeholder, and I think we all have it in us to be kind, especially to someone who is struggling, in pain, feeling alone, feeling scared.

So here’s an adage revision: Be kind.

People who are able to conceal or at least minimize the symptoms of their mental illness are often not believed when they do finally disclose, and are often met with comments like “But you don’t look/act/sound/seem mentally ill.” Don’t give in to preconceived ideas about what a mentally ill person looks/acts/sounds/seems like.  When someone has the courage to say “this is who I am,” simply believe, without feeling the need to respond at all.

The ability to form and maintain relationships is a struggle for many people, but for those who have mental illness, relationships of any kind—personal, professional, hierarchal in terms of boss/employee, teacher/student, even parent/child can feel almost impossible, because mentally ill individuals find trust difficult and often doubt other people’s motives, and their own perceptions of those motives.

So, when someone with a mental illness shares information about his/her condition, protect and respect both the information itself, and the courage it takes for anyone to take such a step. Don’t take this as an opportunity to gossip or make fun of someone, or to criticize or alienate him/her.

Don’t use such precious, intimate information as fodder for social gatherings and entertaining stories. Understand what it takes for anyone with a mental illness to share anything at all, and guard that information with the care it deserves. Even if you feel compelled to share personal information with another professional out of concern for someone’s safety, do so with respect and in good faith, not out of malice or in anger or disgust.

One of life’s greatest ironies is that connectivity has allowed us to disconnect. It happens all the time—families sitting in restaurants, each of them on their iPads/iPhones/i-whatevers, texting abbreviated soundbites of reality to the avatars of their “friends” instead of engaging with the physical beings sitting in front of them.

Apple has become parents’ babysitter of choice as much as it has become the preferred companion for most adults, who walk around with touchscreens attached to their hands, eyes always looking down and squinting as they struggle to read the microscopic text-speak that makes them feel a part of something.

Everyone is so busy “checking in” that the entire world seems to have checked out.

But this is all by choice, this tech-addicted disengagement.

Imagine wanting to put the phone down, to look up and see what is in front of us, to speak directly to the person standing there, rather than through the safety shield of a phone, where tone and emotion don’t matter. Or imagine being the only person without an i-device, in a world of i-deviced beings—how do you communicate? Who will listen to you? Look at you? Understand you?

This, I imagine, is the hallmark of mental illness—this feeling of singularity, of being looked through rather than seen, of being talked about rather than spoken to. Of not speaking the same language as the rest of the world. 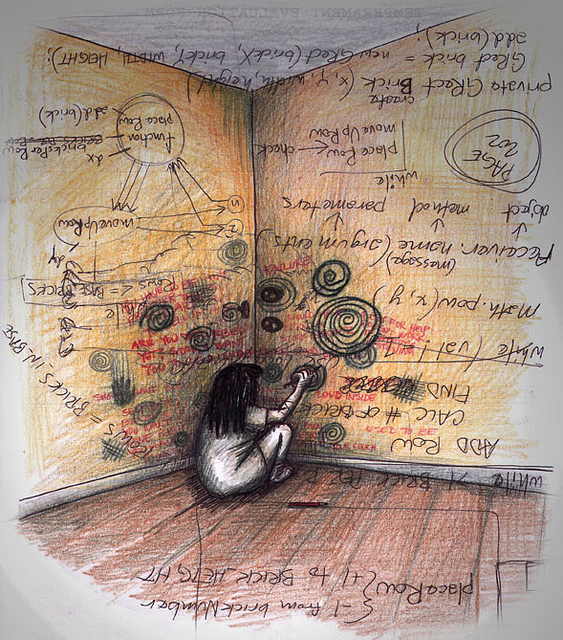 Awareness raising months come and go, often revving people up for a few weeks, then vanishing without a trace, without any evidence of having raised awareness at all.

I certainly hope we can use this month of May to fight for better healthcare and medical treatment and legal rights for the mentally ill population, but more than that, I hope we can begin to find—and maintain—a sense of compassion, a sense of responsibility to care for and about those who struggle with mental illness.

We all know someone who suffers, perhaps in silence, perhaps in a loud, public way, perhaps in our own mirrors, but the commonality is that they are all suffering, and they all want and deserve to be heard, to be seen, and to be treated like human beings.