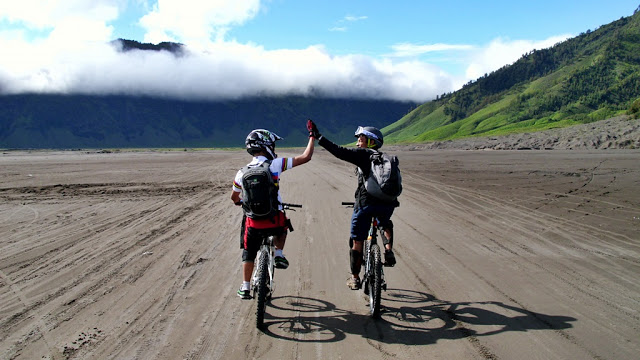 My husband and I took off heading east from Berkeley, California to New York to catch a plane to Europe.

We were on our bicycles, mind you, and proudly displaying our brand new gear—from a gasoline-powered stove to the latest in technical fashion, to lighthouse-strength headlamps and iPhone5s.

We were the Mercedes Benz version of bike touring. We were on a five-star mission. We took so much pride in our stuff you might even say we were, umm, attached. In fact, I used to say that the success of our trip depends on the quality of our gear.

I was a much different person back then.

You know how the Buddhists are always saying that the cause of suffering is attachment? A year traveling on a bike has certainly hit home that Noble Truth.

We weren’t even out of California when I realized we were biking straight into the law of nature’s primo truth: change.

“Remember when you cried when you lost that bandana?” My husband and I reminisce. I smile at that memory now, but as my favorite square piece of tattered cloth flew from my snack basket while I flew at 30mph down a really big hill, I assure you I was not smiling.

It happened again and again with more important stuff.

Once in Portugal we blew both tires—we walked 20 miles to the nearest bike shop.

We faced the end to cooked meals and coffee in a wet and wintry Sicily when we lost our stove—we built earthen ovens and cooked with alcohol in tin cans.

In the sandy desert of Tunisia our indestructible camera finally broke after hitting pavement a fourth time. No more pictures, I guess.

We even lost our wallet and just about every bolt, nut and screw on our tandem went bust in irreparable ways—we harnessed the magic potential of zip ties and electrical tape and kept ourselves on the move.

Time after time our material “essentials” went AWOL, and our stone-carved plans would dissolve and we’d be forced to adapt. What in the beginning we felt as loss in the end we felt as change.

The constant of the trip was not our things—it wasn’t even the scenery, or the weather, or the country for that matter.

It became obvious—the only constant is change. I learned: the journey is always happening and deeper than the stuff. We may need stuff to travel, but none of it (right down to the bike) is really, truly important.

Number 2: Life Really Is About the Journey

As we were preparing to leave, my dear old dad, totally opposed to the insane idea of riding a bicycle across America, offered us his car for the journey instead. Although my hamstrings and quads wished we would have taken his keys, I kissed my father a sweet goodbye, leaving him and his little green hybrid behind.

It was an easy decision—um, dad, we’re not really trying to get anywhere, we just want to ride. But even if we were, most bike tourists would agree; it’s about the journey, man.

Although we were always biking towards a spot on the map—Las Vegas, Sedona, Louisville, Baltimore, New York City, we knew the point was never to arrive. The big-city, the National Park, the point-of-interest highlights were mere stops along the way, and they came and went like the winds in Dodge City, Kansas.

The real soul of the journey is in the simple everyday stuff—changing tires, fondling small bugs, waving to strangers, chatting with strangers, riding through forests, riding downhill, riding along streams, rice and beans, chocolate granola bars, sunsets, sunrise, sunshine, sleeping on the beach without a tent—none of this has anything to do with getting somewhere, you see.

You arrive only when you stop trying to be somewhere else. My Trek 520 knows this like she knows bumps in the road.

Number 1: Experience is the Greatest Teacher

To truly know Paris, you have to go because Paris is in Paris.

But to go there? There’s nothing between you and Paris. You know it directly, immediately, intimately. It becomes a truth for you—as you kiss the French guy, you know—this is Paris.

I actually haven’t been to Paris, but regardless, bike touring shattered my beliefs of the world. I realized how many preconceptions I held, and that they were descendant from outside information I regarded as truth.

Like this one: the world is a scary place, and people cannot be trusted. Thanks to experience, I know that’s complete horse poop.

I was in Bosnia, an area recently at war (1992-1995) which claims the world’s highest concentration of active landmines, and it was oddly one of the most pleasant places I’ve ever been.

I’ve visited the Arab world—those people would take you in and feed you their only meal if it looked like you needed it.

The Bible Belt, USA? We knocked on church doors when there was no other option for camp and we were never turned away.

Now, I realize what my saying all this means, that even this very article should not be taken as truth for you. Right on—it’s only truth for me because I’ve experienced it. For you, it’s mere words, information, perhaps inspiration.

Like all spiritual literature, it’s not intended as a substitute for experience. You may get on a bike, ride 10,000 miles and write an entirely different story.

Get out there, feel the road, smell the car exhaust, beg the 13,000 foot pass for mercy, and write me when it’s done.