Music, Movement & the Beat of the Breath. ~ Anne Samit 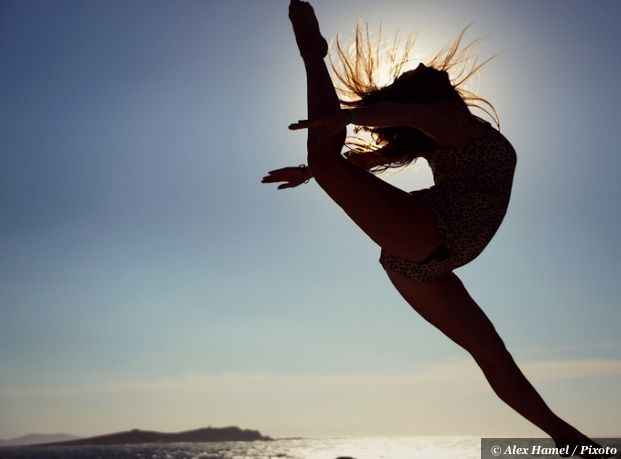 From one day to the next, I look forward to yoga.

It’s been some time since I first stepped into the studio, and I never tire of it.  I like preparing to go. I like being there. I like the workout.

And, in turn, I like whatever it is I’m doing afterwards. The after effects of each class stay with me until the next class, and so I go as often as I can.

It’s a good place, and it puts me in a good space.

I can’t exactly pinpoint what it is about yoga that clicks with me, but something definitely does. And I don’t think it’s to anything new in me which it connects but rather to something seemingly age old, perhaps from the time I was little and from maybe even before.

In one of my Vinyasa classes, we were in a flow, moving between many different poses.

We flowed from Warrior I to Humble Warrior to Warrior II. We swept from High Lunge to a side twist to Reverse Bird of Paradise. We moved from Warrior Two to Extended Side Angle and into a bind.

The music played, my body flowed and my mind did, too—back to when I was six or seven or eight years old in ballet class.

We moved into Standing Split and then brought our feet together for a forward fold. We lifted halfway and folded again and then flowed into Warrior II once more.

We straightened our front leg and flowed into Triangle pose.

My body reached forward and my mind reached back, and I so vividly remembered myself in my black leotard and pink tights doing The Fun Step. This happened at the end of ballet class when the teacher would map out a pattern of steps across the room and change up the music.

We would skip and hop, one at a time, traveling from one corner to the next on a diagonal. I loved it. I vividly remember looking down to find my feet and trace the pattern but not being able to see beyond my little girl’s stomach to my toes!

We flowed back to Warrior II and then sailed right into Half Moon. I bent my back leg and grabbed my ankle for a sideways backbend.

As a little girl, I never wanted to go to ballet. It was scheduled on Saturday mornings when I was allowed to watch television, and I didn’t want to do anything but watch H.R. Puff and Stuff. But I was always happy at the end of class when the good music played, and we flowed freely with The Fun Step.

After class, I would hang back to watch the older girls dancing jazz, wishing to be one of them, dancing more freely and always to better music.

Ultimately, my mother caved, and I left the ballet scene only to wish in my teenage years that I had not. I filled the gap with other dance classes and dance squads throughout my middle and high school years. In college, I fulfilled my physical education requirement with a dance class, too.

We moved through our Vinyasa and repeated the flow on the other side, moving from one big motion to the next.

The good music played, and I sailed freely between the poses as I followed the instructions that made up the flows of the first part of class.

There has always been something about movement and music that works for me, and somehow, yoga makes this connection. The music and the movement take my body and mind through a moving meditation, and that’s what I think keeps me coming back.

One of my instructors makes sense of it another way. He says: “moving like this is how we are moved.“

Ironically, his class doesn’t even have music. In his class, we move to the beat of our breath.

Regardless, for me, it’s all the same, because, really, I’m just doing The Fun Step all over again, only this time I can see my toes.