Be kind to your skin: oil up, naturally! But first! A relephant bonus from Dr. Douillard and elephant’s Waylon: 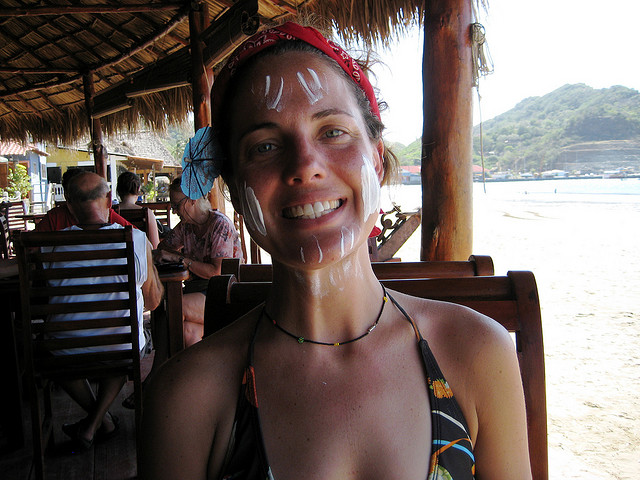 How much faith do you put in your sunscreen?

According to a report released by the Environmental Working Group (EWG), there is surprisingly little proof that sunscreens prevent most skin cancers! (1)

According to the International Agency for Research on Cancer, “Sunscreens should not be the first choice for skin cancer prevention and should not be used as the sole agent for protection against the sun.” (IARC 2001a)

With this in mind, find out which sunscreen ingredients you must avoid, and learn some natural and dietary strategies to protect your skin from the sun.

New research reports that sunscreen does not protect against the majority of skin cancers. Bolster your sun protection with alternative methods, and in cases of prolonged exposure, look for the safest sunscreens:

>> Go “Non-Nano.”
>> Avoid retinol and retinyl palmitate in sunscreens.
>> Safeguard your levels of vitamin D3 and vitamin A.
>> Use clothes, hats and shade as your best defense against sun damage.
>> Increase your skin’s resiliency with specific foods.

According to the EWG report cited above, a wide range of public health agencies—including the FDA—have found very little evidence that sunscreen prevents most types of skin cancer.

In fact, the FDA has proposed prohibiting the sale of sunscreens with an SPF value greater than 50+, “because of the absence of data demonstrating additional clinical benefit.” (FDA 2011a) In other words, just because a sunscreen has a high SPF, it may not mean that it is providing any additional protection against the sun.

Sunscreen Does Not Protect Against All Skin Cancers

Studies do show that regular sunscreen use reduces the risk of squamous-cell carcinoma (SCC), but not necessarily that of other types of skin cancer. Squamous-cell cancer, a slow-growing, treatable disease, is estimated to account for just 16 percent of all skin cancers.

Of the remaining cancers, 80 percent are basal-cell carcinoma and four percent are malignant melanoma, according to a review published by the American Cancer Society. (Greelee 2001)

The International Agency for Research on Cancer (IARC) has concluded that:

To Nano or Not to Nano

While conventional zinc oxide and titanium dioxide are generally considered safe, consumers complain of the “white nose effect”—an unsightly white film left on the skin. As a result, in typical American fashion, the sunscreen companies processed these mineral sunblocks into microscopic particles, called nano particles,—which result in no white residue—voila!

>> Researchers at UCLA stated that it is probably accurate to regard nano-material as potentially hazardous waste until proven otherwise.

>> In 2010, human in vitro skin cells were deeply penetrated by nano-sized titanium dioxide, not just through the skin but all the way to the nucleus of the cell.

Because many manufactures are proud to advertise their nano particle sunscreens, they are typically easy to spot on a label. At the same time, many health-conscious sunscreen manufacturers are equally willing to label their sunscreen as “non-nano.”

Look for sunscreens with Non-Nano Zinc Oxide (also found in most diaper rash creams). Non-Nano Titanium Dioxide would be the second choice, as the degree of its safety is still unclear.

Vitamin A, a Common Sunscreen Ingredient, May Speed the Development of Cancer

According to the 2012 EWG report, (1) data from an FDA study indicates that a form of vitamin A, retinyl palmitate, may speed the development of skin tumors and lesions when applied to skin in the presence of sunlight. (NTP 2009) This evidence is troubling, because the sunscreen industry adds vitamin A to 25 percent of all sunscreens.

Vitamin A is used in sunscreens as an anti-oxidant that slows skin aging. While that may be safe for lotions and night creams used indoors, the FDA recently conducted a study of vitamin A’s photocarcinogenic properties—studying the possibility that it may promote cancerous tumors when used on skin exposed to sunlight.

In the FDA’s one-year preliminary study, tumors and lesions developed more quickly in lab animals coated in a vitamin A-laced cream than animals treated with a vitamin A-free cream.

The EWG recommends that consumers avoid sunscreens with vitamin A. On product labels, it often appears as retinyl palmitate or retinol. Look for these ingredients on the label and avoid products that contain them.

Do Sunscreens Do More Harm than Good?

Sunscreen ingredients with the highest concern for exposure and toxicity:

See the full report at EWG.org.

Sunscreen ingredients with the lowest concern for human exposure and toxicity:

The main source of vitamin D3 is from sunshine. Regular use of sunscreens can block the production of vitamin D3 on the skin. Vitamin d3 supports optimal bone health, immunity, genetic expression, heart, blood, blood sugar, cognitive, mood and hormonal health. It is chronically deficient in most Americans, putting many at risk.

When using sunscreens, it is important to know your vitamin D3 levels. Some people can make enough vitamin D3 from 10 to 15 minutes of unprotected sun exposure several times a week. Many others cannot. The amount of time needed to produce enough vitamin D3 depends on the individual’s age, skin tone, the intensity of sunlight, sunscreen use, time outdoors, and skin cancer risk.

Experts agree that the most beneficial range for vitamin D3 in the body is 50-80ng/mL, which must be determined by a blood test. Don’t let sunscreens deplete your vitamin D levels. Severely low levels of vitamin D can result in rickets. Read more about our Home Vitamin D3 Test Kit.

In an uncontrolled trial, researchers found that taking 50,000 IU of vitamin A orally, two days to two weeks before sunshine exposure, helped to increase the length of time before the skin became pink or burned. (2)

I am not suggesting that you take such large amounts of vitamin A in supplement form, as the RDI is only 4-5000 IU, but this is a very easy dose to achieve from foods rich in beta-carotene. More than half of the beta-carotene in foods is converted into vitamin A. Here are some of the highest dietary sources of beta-carotene, in just 3.5 ounces of each food:

Alternatively, if you’re game, you can eat 3.5 ounces of grass-fed beef liver and get 44,000 IU of real, already converted vitamin A.

The Art of Reapplying

New research shows that all sunscreens, no matter how high the SPF, should be re-applied every 60-90 minutes, as they do break down.* Studies show this to be true even with sunscreens with an SPF of 50.

Your Best Defense
I recommend avoiding extended sun exposure. Use clothes, hats and shade as your best defense against sun damage. Then use a natural non-nano sunscreen with a lower SPF and apply it more frequently*. If you experience extreme exposure or have delicate skin, use a non-nano zinc oxide as a block.*

The Shady Side of Sunscreen