Underwater sculptures are a sustainable way of exploring the ocean.

That is the message that Bali, Indonesia is sending out to the world.

Amed, Permuteran, Nusa Dua, the Gili Islands and Lombok are some of the locations where we can find pieces of art while snorkeling or diving around the Indonesian island.

I worked on the underwater gallery project in 2013. I love nature and believe the oceans are our greatest natural treasure. We are deeply connected to the oceans, through our emotions, our imagination, our subconscious, our dreams. If human actions continue to degrade the oceans and nature in general, it will influence each one of us directly and substantially.

The underwater sculptures send out a strong message about sustainability and respect for nature and as a consultant for strategic communications I enjoyed every bit of this project.

The communication strategy was based on using art (photos) together with strong messages to build the  campaign, which was aimed at raising awareness on the importance of conserving the oceans.

Another part of the strategy to spread the message was to involve the local artist community in the project. Many artists—being the eyes of the world—are already concerned with ecological issues and their art collections revolve around it. By involving them we created a powerful synergy.

The living sculptures are art with purpose: they create new habitats for marine life, thus helping the recovery of destroyed coral reefs and they are also works of art that attract diving and snorkeling tourism.

Coral reefs are the rain forests of the oceans.

They are living animal colonies that provide nesting places for the fish and other creatures. They are crucial elements of our oceans eco systems and if coral reefs are destroyed, the fish will look for housing elsewhere or disappear entirely.

Local communities on Bali are dependent on fishing and tourism, which in turn revolve around coral reefs. Just as in other places in the Coral Triangle, coral reefs in Bali have been significantly threatened by the impact of development, pollution and bombing and cyanide fishing.

According to the Reefs at Risk 2012 WRI report, Indonesia, with the highest percentage of reefs per square kilometer, is listed among the nine countries in the world that are most vulnerable to coral reef degradation. Being one of the highest fish and seafood providers in Southeast Asia, the majority of the the population is depending on the coral reef for food.

Consequently, destruction of the reef has a significant social and economic impact.

Bali’s population income largely depends on tourism, but planning and effectively managing threats against coral reefs is an on-going challenge throughout the country. At the same time, many people on the island that rely on marine tourism for their livelihood are becoming more aware of the importance of preserving the marine resources.

Many of them have actively started to assist the recovery of the coral reefs in their respective areas, including in Pemuteran, Tejakula, Amed and Nusa Dua, by placing artificial reef structures to stabilize the rubble of damaged corals.

The living sculptures are a collection of underwater contemporary art that turn objects into breathing coral reefs and represent a unique and positive human intervention in nature. They serve as fish nurseries and regenerate the eco systems, but they also make for interesting diving sites, supporting the local community and businesses by increasing tourist activities.

There are many such installations around the world, amongst other in the tropical areas of Mexico and the Caribbean.

One of the organizations that has been building the living sculptures around Bali in the past five years is the Marine Foundation, a non-profit organization from the UK. They work directly with environmentalists and the local communities such as The Coral Alliance, Reef Check Indonesia, Gili Eco Trust, Karang Lestari foundation and many more.

“The impact of the living sculptures on conservation is already being recognized by the stakeholders and the local community. Most of all, the living sculptures have good media outreach that helps spread the awareness, which facilitates our work.” says Naneng Setiasih from Reef Check Indonesia.

The Marine foundation was working with the Indonesian art community by commissioning Indonesian artists such as Wayan Winten and Eddie Prabandonoto design and create the sculptures. Some of the famous eco brands such as the Body Shop sponsored the projects. 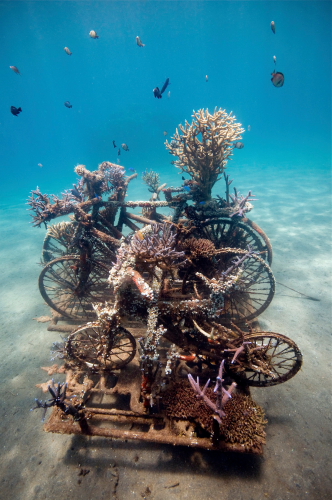 So where are those underwater galleries hiding?

1. Permuteran, Bali: The West side of Bali has the oldest coral gardens and several sculptures: the Coral Goddess, Bicycles and Permuteran Animals. The Coral Goddess received the United Nations Development Programme (UNDP) award for sustainability in 2011. These sculptures are constructed with a unique invention: the bio-rock method which uses low voltage electricity to stimulate coral growth. Visitors can take a guided dive around the projects, leave their name as a legacy in the gardens by sponsoring a coral program or take a bio-rock diving specialty course. Karang Lestari foundation provides more information.

2. Gili Trawangan, Lombok: this island East of Bali hosts three living sculptures: Manta Ray, Deus Ex Machina and Tugu Dragon. Here one can support the work of Gili Eco Trust by paying the eco tax, taking a photo with the Deus Motorbike underwater or take a guided dive trough the coral gardens. The Tugu Dragon is located in the ocean front of Tugu Hotel in Sire, Lombok. To see the living sculpture and witness the progress achieved in coral growth, visitors can take a swim or a boat ride to the floating pontoon.

3.  Amed, Jemeluk bay, Bali: The East part of Bali has the most diverse underwater coral gallery. The first structure placed in this underwater spot was a mailbox, through which divers can send postcards and letters. The structure was created by Balinese artist Wayan Winten and was placed in 2011. In May last year, a mermaid statue—also created by Winten and sponsored by The Body Shop Indonesia—was installed at a depth of 10 meters. Two other smaller pieces in the shape of Ganesha and Hanoman characters were placed in a nearby spot at the same time.

A new statue in the shape of baby’s head has been added to the Jemeluk Bay underwater gallery in May 2014. The sculpture was created by Eddie Prabandono as a part of his Luz Series and sponsored by the Pacific Asia Travel Association. Amed is now in full development and getting increasingly popular as a diving spot. The area has been declared a “no fishing zone” to assist raising awareness of the both local community and the tourists.

I am proud to have taken a part in this project, influencing its development and growth. During my career I specialized in so called Public Diplomacy and its biggest advantage is that it rides on existing initiatives by various interest groups to spread the message across.

Art is, in my opinion, one of the highest forms of communication on Earth. To be able to use the impact of Art and work hand in hand with artists to raise awareness for ocean conservation is as good as it gets. These messages leave a deep imprint on our psyche, even if we do not act on it immediately and actively. The subconscious registers the message and will know what to do with it.

On a final note: the ocean staff and the underwater inhabitants kindly ask you not to touch the corals while you admire the living sculpture galleries. 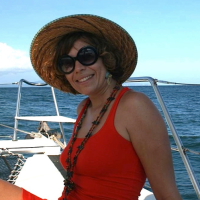