Dig to the Bottom & Other Lessons I Learned From Thrift Store Shopping. 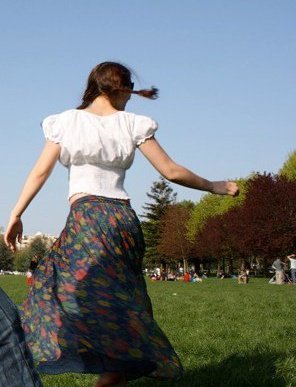 The upper loft of my favorite friperie (thrift store) did not look like it could hold so many people.

Weak, dusty light filtered through one small window to illuminate at least eight of us rummaging through massive cardboard boxes of used clothing. The musty smell of mothballs and age filled my nostrils. I felt the need to sneeze, and beads of sweat formed on the back of my neck.

I seriously considered the possibility of climbing into one of the boxes to escape the clamoring.

Everything up here cost just one euro. Less daring customers browsed the racks of more expensive vintages below, occasionally glancing up at the commotion in the loft.

From 2009 to 2010, in the year that I lived in Paris, I would visit the seven or eight friperies in the Marais on a near weekly basis. Not because I needed anything. Mostly because I enjoyed the search, and there was always that vague possibility that I might find treasure buried in the one euro boxes.

I came to have favorite stores, and I came to know when to avoid the one, three, and five euro piles, and when I could rifle through them in peace.

The Marais, once the old Jewish Quarter, became my preferred neighborhood for wandering.

Its pricey restaurants and bars were out of my budget, but its winding stone alleyways, small museums and eclectic boutiques never lost their charm.

Not to mention an entire street of falafel stands!

Among the treasures I found that year: A long flowing skirt that jingles when I walk. Several white peasant blouses. A blue sequined dress, maybe from the 1940’s. Maybe not. A 50s-style salsa dress. More than four years later, I still wear many of them.

1. You are never too old to grow into something.

Many of us probably have mothers who would buy our shirts, pants, and especially shoes with “room to grow.” We probably ended this practice when we “stopped” growing. But as it turns out, our bodies (and minds) are constantly changing, shifting and growing (feet not so much).

When I shop at thrift stores, I never look at size tags. Mostly, I look at material and color. Styles change, and you would be surprised what you can “grow” into.

2. Dig to the bottom—that’s where the good stuff is.

Like yogurt, compost piles and pickle barrels, cardboard boxes of used clothes do not reveal their contents on the surface. Until you dig deep, you don’t really know what you might find.

And it’s worth the effort—I can tell you from experience.

3. It is easier to search by yourself.

True, there is no one to ask for her opinion of the brightly colored top you just unearthed. But there are no sharp elbows and heels pushing you aside, either.

In the balance, I will take an empty thrift store any day. I probably visited those Marais stores as much for the quiet, calming methodical searching as for what I might find. Whenever I would bring friends along, I could not concentrate on the delicate, time-consuming process of sifting.

No, it is much better to search alone.

So, there they are, the life lessons I have learned from shopping at thrift stores.

In July 2013, I visited Paris for the first time since living there. Of course, I went to the Marais and the friperies that seemed to have remained perfectly preserved under their fine patina of dust.

After living out of a backpack for a year, I had less desire than ever to find anything to buy, but I set to searching all the same.

In the dusty light of a July sun, I sat down beside a cardboard box and reached to the bottom.