The “Perfect” Script: There is Another Way. ~ Emily Pereira We’ve become a society of “experts.”

My journey to becoming an expert began around the age of eight as I attempted to be as perfect as I could be, while making it look like I wasn’t trying to be perfect at all.

My parents loved me, my teachers applauded me, and my peers accepted me. Savvy little thing, I was.By the time I reached my late twenties, I diligently achieved all of the things I thought would bring me happiness. I continually ranked number one nationally at a coveted sales job, lived in a home on the beach with my Internet pioneer boyfriend, went on extravagant vacations with beautiful and hilarious friends.

It sure looked good, but for some reason, I couldn’t shake a pervasive feeling of blah.

I wanted to be a woman who strode confidently in the direction of her dreams…but I couldn’t identify anything I had a burning passion to do. Adrenaline pumping activities served as a brief refuge from this pervasive apathy. High falutin’ parties and friendship drama were temporary distractions from a deep seated sadness churning inside of me.

In my limited scope of consciousness, I blamed my man. Obviously he wasn’t doing enough for me…for us.

This prompted a stubborn case of the “when we’s,” that ruthlessly hijacked me from the present moment.

I mean, hadn’t I achieved all of the other things that are supposed to deliver me across the imaginary finish line into the promised land of fulfillment?

In a word, no. But I didn’t gain this insight until much later.

It wasn’t until after the boy broke my heart; after my friends cut their ties with me; and after I began my quest inward that I began to understand. And much to my surprise, what felt like the most painful breakdown of my life, gave way to the most pivotal breakthrough I could ever imagine.

It was then that the forces of the universe converged to connect me with a powerful spiritual teacher and I saw the greatest source of my pain was that I’d been unconsciously following a script I didn’t write.

I’d soaked up messages from the fabric of reality around me, and internalized them as my own.

Clearly I wasn’t nearly as savvy as my eight-year-old self would have you believe.

My narrow script left little room for creative risks, because taking chances might expose me as not being the image of perfection I’d gotten used to portraying.

It urged me to find the most successful alpha-male in the room, and basking in his glow I would feel worthy and safe.

Now mind you, I had no idea I was doing any of this. The most devious thing about my script was that it had me believing it didn’t exist at all.

The first rule of the script is that there is no script.

As I continued to pull back the layers of illusion I’d carefully constructed around me and got really real with myself, I recognized that I’d created a life based on external validation and in doing so, became a very fearful and competitive woman.

When my teacher urged me to explore my creative side, I was like, “Creative side?”

For 32 years, I’d always assumed creativity was a genetic thing and sadly that gene had unceremoniously passed me by. I soon learned that “blah” feeling I couldn’t shake was merely fear of failure masquerading as apathy. My script had me believing that unless I was going to be perfect and do it perfectly I may as well not even try.

As I gained greater consciousness I discovered that I didn’t have to be perfect to participate, I just needed to be The Beginner.

With this simple, yet revolutionary insight, I gave myself permission to be The Beginner and began to write openly about my experiences and emotions.

I was amazed that by suspending judgment, my creations flowed freely, and a most unusual thing occurred—I began to reveal myself authentically and vulnerably to myself, which restored a sense of integrity I’d lost somewhere along the way.

And then, it was as if a dam burst open inside of me and suddenly I exploded in creative passion.

I began playing guitar, singing and writing songs. I started painting big canvases full of bright colors, and built an art studio in my home. I began jazz dancing after stopping nearly 20 years prior.

The overwhelming desire to create generated such a monumental shift inside of me that my entire vision of self expanded. I was awake, alive and inspired.

The resentment I’d been harboring towards my ex-boyfriend finally evaporated like stubborn condensation on the bathroom mirror, and I realized it wasn’t he who had abandoned me; I had abandoned myself and my dreams a time long ago in a bid to gain approval and acceptance.

Like a seesaw, as my belief in myself went up, I watched my competition go down.

I developed a genuine camaraderie with other women who are courageously following their dreams, and a sincere compassion for those still trapped in their own private prisons of perfection.

I wanted to call out from the rooftops to every woman who is struggling to find what sets her heart on fire, “There is another way!”

The way to an adventurous, passionate, fulfilling existence is the exact opposite of what most of us have been programmed to believe.

Life’s gifts don’t come from being perfect and doing everything perfectly; they show up when we simply give ourselves permission to be The Beginner. 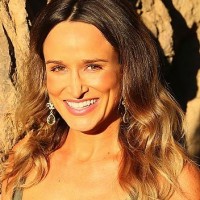