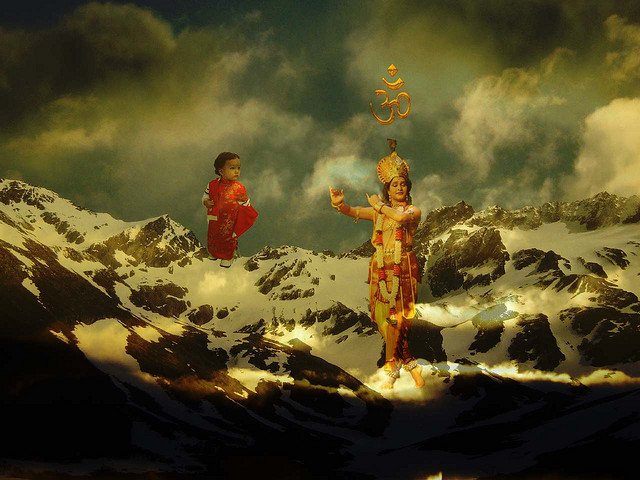 I am one of the chaplains for Intermountain Health Care here in Utah so I find myself up at the Primary Children’s Hospital quite a bit.

Most of the time it’s inspiring to see the way children deal with sickness and trauma. Other times is can be absolutely soul-crushing. Luckily I seem to have a rapport with the kids there…perhaps because I’m somewhat of a man-child myself.

One evening, after a long day at the hospital, I was hurrying through the lobby hoping to still be able to make my Jiu-Jitsu class, when I was stopped by a father holding a small boy who was obviously a patient, and who looked like he had recently been through some pretty invasive surgery.

“What’s the Buddhist perspective regarding sick children?” The father asked.

I hate this question because to me it’s one of the ugliest (and often the most misunderstood) parts of Buddhism. Karma, the universal law of cause and effect, suggests that our past actions are responsible for our current conditions. It’s practically Newtonian; however, when we’re talking about young children—especially newborns—the number of negative past experiences that they could have possibly been through cannot equate for their current level of suffering.

In answering this difficult question, many Buddhists believe that these children must have done something wrong in their previous lives to warrant being born with such afflictions. I hate this theory, and vehemently disagree with it. It feels like a scapegoat to me and incorporates a level of moral judgment that leaves a bad taste in my mouth.

Whenever I’m asked questions like this, I’m faced with the choice of telling people what traditional Buddhist theory teaches us or going with my own personal and often slanted perspective. I chose the latter because frankly I didn’t have it in me to look at this father, and tell him that his son must have been a bad person in a theoretical past life and therefore deserves whatever anguish he’s going through. Would you be able to tell him that? I’ve been that father, holding a sick child and asking the universe why. I knew his pain intimately.

“Do you know what a Bodhisattva is?” I asked the father. He didn’t—which wasn’t surprising to me because most people in my home town of Salt Lake City don’t have much of an understanding of Buddhist concepts, so I explained it to him.

A bodhisattva is a person who clears away the obstacles and distractions that prevent us from achieving enlightenment.

They are the ones who provide us with the opportunities to become our best selves, who encourage us to reach for greatness, and offer unconditional support whether we deserve it or not. I believe these sick and dying children are perfect bodhisattvas who provide us with a self-amplifying feedback loop of empathy, and who force us to transcend our current levels of compassion.

They help realize, that when seen as a whole, the man machine of society is increasingly leveraging its tools to address the grand problems of humanity. They force us to engorge ourselves with emotion, and to embrace the ephemeral nature of this moment. They make us ask ourselves how can we partake in these beatific visions and nightmarish perspectives our existence provides, and try to leverage them into a life for ourselves that is at the very least is filled with a little bit of grace.

If a child can do that, simply by existing and bearing the pain we are all afraid to feel, how does someone view that existence as some type of punishment?

I told the father this, and then I asked him if his level of empathy and compassion had increased or decreased since his son became ill, had he become hardened by the experience or had it shown a vulnerability and depth of hope he wasn’t aware he previously possessed.

I asked if I could possibly give the boy a blessing which the father allowed, and then gave the boy one of the Funko figures I keep inside my backpack for just such emergencies (everything is better with an Action Figure), then I left.

Karma isn’t a punishment. It’s not the existential boogeyman hiding under out beds waiting to gobble us up for things we don’t have the power to change. It is simply a gentle reminder to do the right thing with the moment presented to you.

Love this moment and do the right thing—if for no other reason than because there are people who are unable too.

We need to stop beating ourselves up over past mistakes.

Be the light right now.

Be the love right now.