Why Good Trance is Better than Bad Religion. ~ Neil Chhabra Take yourself, if you will, to a packed nightclub in a big city.

The sweaty throng claps together in unison. A whistle blares in the distance, syncopating sharply with the man-made beat. The DJ emerges atop his pedestal. He is smiling and his hands are raised, clapping to the rhythm of the pulsing mass. Tonight he is a shaman.

With a twist of a knob and a flick of the wrist, a filthy, funky drive of bass rips through twenty thousand watt speakers. Like the claw of a cat, it snatches the crowd into its steady groove. Four-count measures at 140 beats per minute rise and fall, expanding and deflating while absorbing layers upon layers of polyphonic sound.

The music moves bodies, overwhelms senses and silences minds. It builds and it grows to a delicious breaking point, that tantalizing moment of sweet anticipation. And then it delivers an emphatic and ecstatic explosion of sonic energy. Thousands of individual beings become one unit, bouncing together to the thumping, cyclical symphony.

This is good trance.

It is loud. It is repetitive. It has at its disposal multiple layers of sound from infinite sources. It immerses the senses in a hypnotic sonic backdrop that rises, falls and rises again. Like the expansion and contraction of the diaphragm when breathing, or the swell and crash of a wave, it mimics the movement of the universe and takes listeners along for the ride—moving along the same wavelength, to the same beat, into the only realm that truly exists.

From primal chants and mantras to elaborate hymns and symphonies, music has always been a tool for spiritual endeavors.

“Music,” according to Beethoven, “is the mediator between the spiritual and sensual life.”

When immersed in the aural wonderland of music, the mind is not thinking or projecting. The mind is just a spectator to the boundless, colorful world of art and creativity, charmed away from conflict and categories and into a world of possibility and truth.

When the mind is quiet, everything simply is as it is. Worry, fear and stress result from either thinking about the past or imagining the future. When we allow mental projections and imaginings to occupy and dominate our consciousness, we are closed off to everything that is actually happening around us at every moment.

We are missing out on life.

“The primary cause of unhappiness,” writes Eckhart Tolle, “is never the situation, but [our] thoughts about it.”

When we allow our consciousness to experience every moment fully, to be only where it is, it is easy to sit back and marvel at the magnificence, the improbable, symbiotic balance of the universe.

While our mind spins about the economy and politics, the earth spins around the sun.

While we stress about our kids and relationships, striatic muscle tissue contracts rhythmically, repeatedly and unconsciously within our chest to keep us alive.

All of this can inspire awe and invoke humility and gratitude. It can foster community.

But when we allow the mind’s chatter to take us away from a direct and present experience with the world, the stark premise of our existence can fan the fire of fear.

Every single one of us is definitely going to die. Suffering exists. People do cruel and violent things to each other. We are born onto a speck of dust, spinning around a gigantic exploding ball of nuclear plasma, dwarfed by a vast sea of nothingness. We are alone in this dark corner of the cosmos, imperfect and impermanent.

The mind is the voice of ego. It needs answers, explanations and a sense of significance or importance. Things like mortality, fallibility and the unavoidable mystery of existence become impossible to accept, so the mind creates and latches onto a version of reality that sounds and feels more reassuring but is completely made up.

Religion is bad when it engages and emboldens fear, fighting back with a steadfast claim of certainty regarding matters about which certainty cannot be had.

Bad religion defends its stated conviction with zealotry and righteousness, often leading to violent and deadly conflict between people who believe in differing versions of things we can never know.

Bad religion elevates an imagined and idealized realm as paramount to the present moment. Its goal or destination exists outside of our lived reality. It resolves that since this incarnation is flawed and finite, salvation, enlightenment or Truth can only be attained in an imagined afterlife. It directs its gaze to the heavens for meaning, instead of just looking around.

“People usually consider walking on water or in thin air a miracle,” says Thich Nhat Hanh, “But I think the real miracle is not to walk either on water or in thin air, but to walk on earth. Every day we are engaged in a miracle which we don’t even recognize: a blue sky, white clouds, green leaves, the black, curious eyes of a child—our own two eyes. All is a miracle.”

When we pay less attention to our thoughts and fears and more attention to the people and things around us, we create love and community. We realize that we are not alone, disconnected and incomplete.

We realize that there is nothing “else” to search for because it is all within us and we are a part of it all, bouncing together to the same filthy beat. 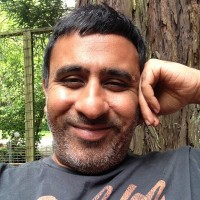