The path is open to break free of culturally constructed norms.

Where I live, women were not legally able to vote until 1940.

That reality is, let’s face it, completely unfathomable. As in, it’s so far outside of my realm of experience that I’m unable to even begin to wrap my head around it. That someone would tell me I’m not legally allowed to vote, or that I was not a “person” according to the law, is no longer an explicit feature of Western society.

It is implicit, though. It is slyly slipped into my subtle fear of walking home alone at night or in the demeaning way women are depicted in advertisements, especially in relation to male model counterparts.

It’s in the cat-calls I heard a female runner receive yesterday as I saw her turning a corner ahead of me, quickly juxtaposed by the male runner I saw seconds later. He would never receive such propositions by strangers on the street. I was struck (again) in that moment how bizarre it is that women do. The worst part is that I didn’t say anything, I was still in shock trying to decipher if the man on the back of the truck collecting garbage really did say what I thought he did.

My shock at the different pressures faced by men and women running in the street is just another example, like voting, of our understanding of gender and sex differences.

It’s time we push forward the evolution of this topic—it’s time we dissolve the gender binary.

I am getting more relaxed about it now, but I used to react quite strongly when someone would use the word gender when what they really meant was sex.

Gender is a culturally constructed set of ideas and behaviours. Women wear dresses and makeup, have long hair, and stay at home to raise children. Men wear pants, splay their legs open when they sit, and walk down a hallway with their books held at their side. Gender is a way we categorize people so that we can understand the world around us—that’s what culture does, it gives us a framework.

Sex relates to the physical primary and secondary sex organs and characteristics. Most often categorized into male and female.

Hey! Just like our cultural constructions of gender! Easy peasy!

But, wait a minute, this depends on which definition of intersex is used—those born with neither strictly male nor strictly female physical characteristics—as many as one in 770 babies born have some form of sex variation.

It’s starting to look like a strict gender binary won’t fit after all.

My theory has always been that things like sexual orientation or identity to a gender norm fall on a continuum. On one end is the heterosexual, identifies-with-the-gender-their-physical-parts-correspond-with, and on the other end is the opposite. And everyone lands somewhere in between. 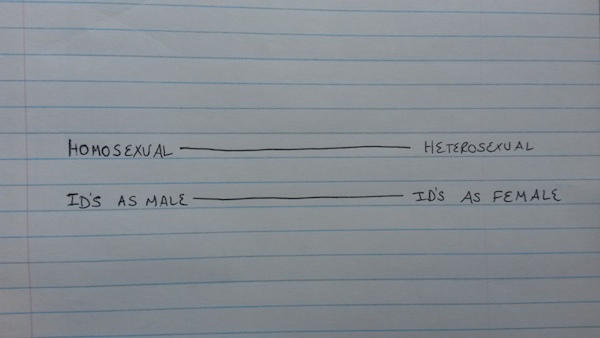 But even this is just another binary.

A true visualization of the different genders, sexes, sexual preferences, etc. would leap out of a two dimensional binary feebly drawn on a page.

It would explode into the 3D brilliance of a star with every opposing, linear “binary” criss-crossing and building onto one another. Each unique individual on this planet would sometimes land on some aspect to identify with, and sometimes they’d jump to another spot. There are no rules about strict ways of identifying, there’s only the truth of our experience in a single moment.

With each person creating their own identity, free from the crushing categorization that society has created, we’re left with a big sphere where we all fit in, exactly where we should, a big mass of oneness, just like we really are. (With a few extra stars thrown in for good measure.) Most of the male and female Hindu Gods and Goddesses have a consort. Siva has Parvati, Sita has Rama, Radha has Krishna. (Durga’s on Her own though. When you can tame a lion—or tiger as She’s sometimes depicted as riding—and a Goddess as fierce as the warrior Kali springs from Your brow, it shows a pretty clear understanding on the inner masculine.)

That’s what these pairing symbolize: the masculine and feminine powers that are within each and every one of us.

Maleness and femaleness exist, yes, but the qualities we associate with them can be developed by anyone. In fact, it’s our birthright that we can develop them.

There is also the Hindu Divine form of Ardhanarishvara. This deity is not solely male nor female. It is both. It is the manifestation of both sides of the binary held in one form, dashing categories to pieces.

Ardhanarishvara shows us that not only do we all have masculine and feminine traits within us, we also have Divine feminine and Divine masculine qualities. We need both in order to reach our true potential.

The idea that our gender and sex categories are insufficient is not new. There are as many different angles to approach this topic as there are people on this earth.

And that’s exactly my point. We don’t need to fit into strict boundaries, we can release ourselves from these constructed forms of identification and embrace our individuality.

Want to wear nail polish? Great! Don’t shave your legs? Who cares! The physical parts we were born with shouldn’t pressure us into behavior we don’t consciously choose.

We can exist in a society where our identities simply exist as the pure expressions of whatever characteristics we choose to exhibit.

I know Facebook algorithms show me things it knows I’m already interested in, but when I see memes and poetry slams and articles ripping up the gender binary into tiny little shreds to make confetti for the party that is life, I can’t help but smile.

And I don’t think it will take another 75 years to fully get there.