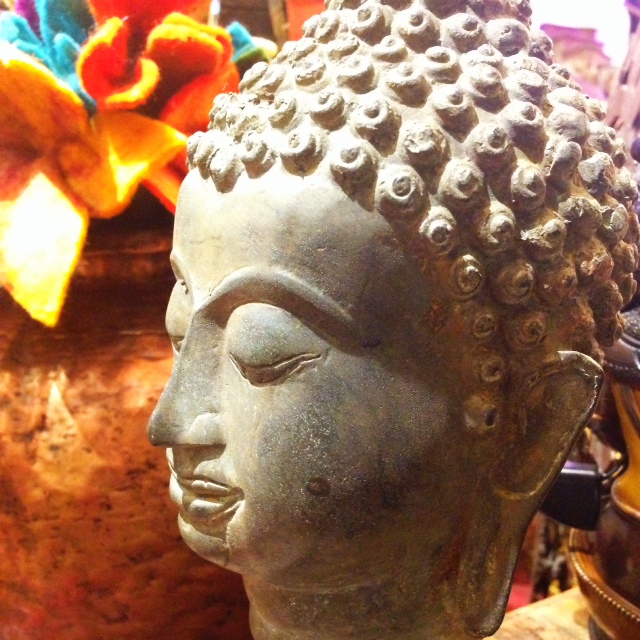 ~ Rock Me On The Water, Jackson Browne

Tonight, I was in a yoga class that took place in what I can only describe as The Twilight Zone.

I call it The Twilight Zone because I literally had no sense of time during the practice. I was so incredibly immersed in the movements that the end snuck up on me, and I only knew it was that time because the instructor dimmed the lights.

We start the practice at the top of our mats, the usual place to start.

We press our feet down and lift our toes up, and we’re instructed to extend our arms up and around and back into place, alternating first one and then the other, until the room is like a pool of backstroking yogis.

And even though we are swimming, the instructor asks us, again, to root down into the earth, to press our feet as if we are instead on dry land, and to lift our toes and glide slowly as if we have many more miles to go.

For 75 minutes, we swim these miles, pressing and breathing, always breathing, and coming to a stop only to feel the earth beneath our imaginary pool.

At one point, we rise from the floor to a lunge and somehow, some way, transition to Warrior II and Extended Side Angle. Then, somehow, in the same flow, we wind up on the floor once more, only to rise into a Reverse Side Angle of sorts.

It’s hard to recall how we get where we’re going, only that we seem to continue to rise from the floor.

We do a lot on one side, working the lunge and the twist and the balance and landing on the same front leg for Toppling Tree before opening into Half Moon. And I’m glad no one can hear me silently call out, Come on, come on, come on!, when my quads can barely swim another lap on the mat.

This practice is sort of mesmerizing. We touch down on the mat to rise up again and again. And two or three times the instructor talks about the earth, asking us to feel it through the floor, all the way down to the ground.

And I imagine it solid underneath, even though we’re fluid above. And I think it must be like this for everyone else in The Twilight Zone, too.

When it comes time for Savasana, the final resting pose, I lay there as the music plays. The piece is instrumental, and I hear a violin and think to myself to ask the instructor for the name of the song, so I can listen to it again at home.

And I wish I were more relaxed, because I think I’m not.

The violin plays, and I hear in the music the same balance I find in this practice. It is steady and grounding, but it also flows and is fluid.

Before I know it, I am in a deep, deep rest, after all.

It seems in The Twilight Zone that it’s just a trick to think I’m not relaxed. In fact, I’m so flat out that I can feel the earth beneath my mat, even though we are one flight up from the street.

And so I lay there with the others, like a swimmer collapsed from swimming as far as she can.

It’s quiet, and the instructor walks around the room, reassuring this one and that one with the gentlest of adjustments. I can hear his footsteps as he makes his rounds.

And it’s then that it’s quiet enough, for the first time in a week, for some thoughts that have been too overwhelming to think. It had been that long since I’d received some very sad news that I hadn’t yet let surface.

But in The Twilight Zone, time is sort of suspended in the balance between effort and rest. The mat is solid, and the room is safe, and there’s a peace that finally makes it okay for these thoughts to appear without fear.

And then it’s over in a blink, and I can’t even remember the closing except for the three Oms, only one of which I can do because it takes a few moments to collect myself and transition out of the zone.

And the lights are on and we are back and now there’s talk of what to eat.

And so I get dressed and ready to leave but take a quick look around to double check.

Everything is the same as when I arrived—except, that is, for me. And there is no pool. There never was. Even though I swam for miles.