When She Wants it More: What to do When a Woman Has a Higher Sex Drive than Her Man. ~ Vanessa Marin 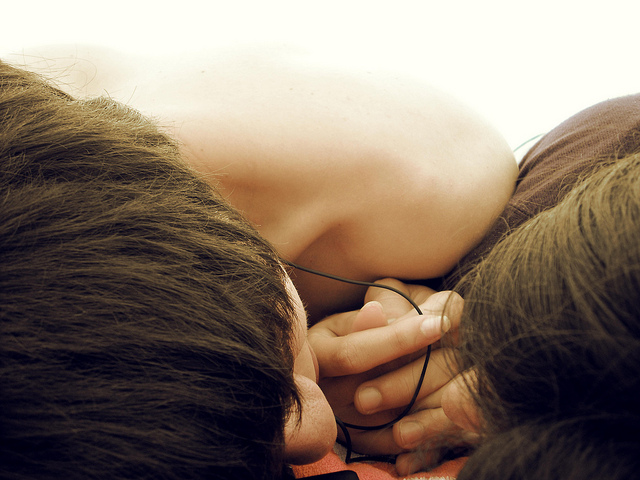 As a sex therapist, I spend a lot of time talking to my clients about managing initiation and rejection in their sexual relationships.

It’s one of the most common reasons that bring people in to see me. I give them advice for making initiations enticing, sharing the reasons why if they’re not interested, and allowing each other to feel disappointed.

My feedback tends to be roughly the same for most of the couples I see, but I’ve noted that when the woman is the partner with the higher sex drive in a heterosexual relationship, a unique set of issues tend to emerge.

The woman is the more desirous partner more often than most people realize, so I wanted to share advice for couples who have this dynamic in their relationship.

Women having higher sex drives than their male partners is hardly ever discussed among the general public. We have plenty of stereotypes about men wanting sex wherever and whenever, and we joke about women being “frigid” or “cold”. Our national discourse leaves very little space for women to be the more libidinous partner.

This lack of visibility results in even more stress for people who are in relationships where the woman is the more desirous partner. Not only do they have to manage their mismatched sex drives, but they also have to deal with feeling “abnormal”. Many of the couples who come in to see me for sex therapy barely even know how to describe their issue without feeling embarrassed or ashamed. They feel like they’re the only couple in the world with this problem.

If you’re relating to that feeling, let me make one thing perfectly clear—relationships where the woman has the higher sex drive do exist, and they’re way more common than you might think. You are definitely not alone.

One simple but powerful step you can take is to acknowledge—both to yourself and to each other—how tricky it is to have these dynamics in your relationship. Talk to your partner about what it’s like to feel outside of the “norm.” This is an experience that you’re both struggling with, so you can bond by sharing this kind of acknowledgment.

Traditional gender rules and roles play a big part of the discomfort around women having the higher sex drive. Since we have such a strong cultural script around men being more desirous than women, having the roles reversed can force both men and women to face some very uncomfortable questions about gender roles.

In the couples I’ve worked with, the men have wanted to be respectful and sensitive to their partners wants, but have struggled with feeling like not wanting sex whenever their partner does means they’re not “men” in the bedroom. Similarly, my female clients have wanted to assert their sexual impulses, but have found themselves feeling unfeminine and undesired.

Feeling sensitive to the mismatch and not knowing how to talk about it often leads women to make jokes about their partners being “wimpy,” or even question whether their man is gay. Men tease their ladies for being “like a guy” in the bedroom. It’s as if the female having the higher sex drive threatens both partners’ gender identities.

That’s why I think it’s so important for couples to talk about the unique gender issues that get brought up in their relationship. This is of course a complex and political topic, but it’s worth starting the discussion about what being a man or what being a woman means to you. How does each of you handle the balance of your masculinity and femininity? Confront the sexual scripts that you have been exposed to, and talk about the ways you want gender to be a part of your relationship.

Another useful thing you can do is try to find other avenues for expressing your masculinity or femininity. Many people tend to wrap up too much of their gender identity in how they show up during sex. If you can find other ways to regularly engage with or feel comfortable with your sense of being a man or being a woman, you’ll feel less pressure in the bedroom.

I worked with a woman who felt like her femininity had taken a tremendous blow after being repeatedly turned down by her partner. She eventually discovered that taking dance classes made her feel deeply in touch with her body and sensuality, and realized that she had the power to reclaim her femininity.

Having good sexual initiation skills is always important, and it seems to be particularly crucial when the woman is the one doing the initiating. For most women, getting turned down by a man triggers the deepest insecurities. For men, having to turn down a sexual initiation from a woman feels like the ultimate sign of emasculation.

When I work with my clients, I help them discover better ways to initiate and turn down sex. You can do this on your own by having a conversation with your partner about what healthy initiation feels like to the two of you, paying particular attention to the gender dynamic. What words, tone of voice, body language, physical approach, or level of eye contact feels right? How can you initiate and turn down sex in ways that make you each feel like a man or like a woman?

For example, one couple I worked with discovered that they both felt most comfortable when the woman shared her desire to make out. She found that she could feel feminine and seductive by going in for a passionate kiss. He realized that if he viewed it as an invitation for just making out, it allowed him to relax and see if he could open up to the possibility of more.

It can be hard to cast aside societal expectations, especially if you feel like you’re outside of the “norm,” but at the end of the day, you have to find a way to be comfortable with your natural levels of desire.

Regardless of if you’re a woman with a high sex drive or a man with a low sex drive, you have to accept that your sex drive is the way that it is. It doesn’t make you any better or worse, or any more or less of a man, woman, or human.

4 Things to Stop Worrying About When it Comes to Sex