The Only Way to Overcome Genocide. 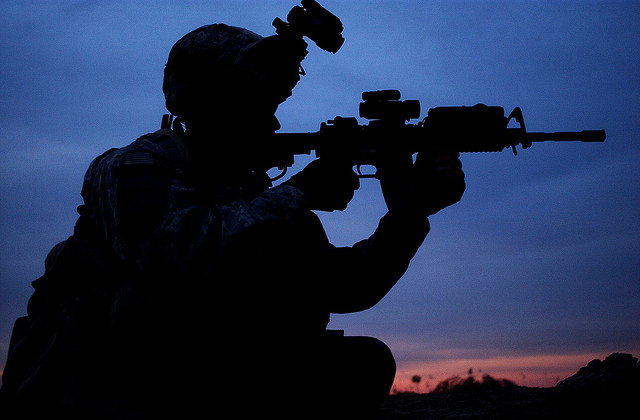 Why Terrorism Repeats Itself: Understanding Iraq.

When the U.S. was invading Iraq back in 1991, I was just starting college.

Frustrated with the wartime chauvinism, I made up a peace poster, walked to the highest hill in the center of the quad, staked it in the ground, and sat out the war, as protesters gathered around.

A fellow protest leader, who later became my best friend, told me about a pro-war politician who was holding a Town Hall meeting. So, we went to debate him and it turned out it was Newt Gingrich, the soon-to-be brains behind the Republican takeover of Congress in 1994.

But he turned out to be an empty legend. Somehow, two hippies were able to go head-to-head with him, on his home turf on the border of Alabama, for about an hour, with simple moral arguments.

Still, however many marches we held, and however many holes we pricked in the hypocritical logic of American imperialism, it did not stop the Iraqi army from being destroyed. And as Saddam’s troops limped back from Kuwait, President Bush Sr. suggested that it might be a good time for the Shiites and Kurds to rebel. An Iraqi friend, Maithem Salih, recently told me how the young men of his city responded to the call. They bravely took up their Kalashnikovs, began to fight, and were then promptly mowed down by Saddam’s modern army.

With eyes wide and body stiff, my friend spoke of how he took refuge with his mom in an ancient mosque. They could not imagine Saddam’s troops firing on the monument. But when the tanks came, the troops bombed the great gate, behind which thousands had gathered. And they fired straight into the most dense portions of the crowd.

Saddam would later slaughter all the young men who had risen up, burying them in mass graves that would not be uncovered until over a decade later. What Saddam did return to families at the time were mere body parts, crudely assembled in bloody bags. It was all part of his regime of terror.

Upon entering office through a coup in 1979, Saddam quickly launched a territorial war with Iran. It was largely trench warfare and it left about a million dead. The loyalty of the ethnic Kurds soon came into question, as their population straddled the border between Iran and Iraq. So, Saddam began to kill off their men of fighting age. He used chemical weapons against villages and pushed survivors into the cities. And while America was his ally at the beginning of this genocidal campaign, eventually he was sanctioned.

This sort of history can leave a people severely traumatized.

Like the Islamic State, Saddam used beheadings to terrorize his victims.

And like the Islamic State, his brutality was stunning and blunt.

Both Saddam and the Islamic State were Sunnis Arabs, who comprise about 20 percent of the Iraqi population. The Sunnis were hit hardest by the American invasion in 2003. And for this reason, many of Saddam’s supporters and even some of his former Generals have made common cause with the Islamic State.

The Islamic State began its life as a series of militias, following the American invasion in 2003. But they came to strength through the civil war in Syria. The Assad regime in Syria has itself engaged in the starvation of whole cities and the widespread torture of prisoners of war. Much of the brutality of the Islamic State is likely to have originated in the fight against Assad as well. The war would have victimized Islamic State fighters, and many must be seeking someone upon whom they might exact revenge.

All of this suggests that what we are seeing now is a repetition of some of the terror inflicted under Saddam.

Terror is often repeated throughout history because it is so traumatizing. The mind has a tendency to fixate on traumatic events, the bombing of one’s home or the sight of a father’s severed head. People who are victimized come to see the world in terms of victims and perpetrators, so trauma victims often exchange roles with their perpetrators over time.

The collective traumas that are now being unleashed in Iraq spring from multiple sources. They are held within the bodies of ordinary Iraqis and embodied in tribal modes of conduct. My Iraqi friend suggests that the only way to overcome the fighting that is now occurring between Sunni and Shia is through generations of secular peace.

Getting there is, of course, the hard part.

After reconnecting with my best friend from college, two decades later, we recalled our own efforts to promote peace. Perhaps the funniest memory from our days of protesting was of an absurdist poster we created for one of our demonstrations.

“Take Off Your Body Condom and Impregnate the World With Love.”

The poster embodied all of the freedom, safety and privilege that made us believe it possible to achieve a world without war. And it pointed to the very real relationship between the armored tank and the armored body. Peace in the Middle East will be difficult to achieve until ordinary people release their deepest traumas, which are largely held in the body. But the whirlwind of violence that is now sweeping through the region will require solutions that surpass even the most sober of slogans.

We would all do well to let ourselves sink a little more deeply into the historical traumas of ordinary Iraqis before offering our own opinions as to what should be done.