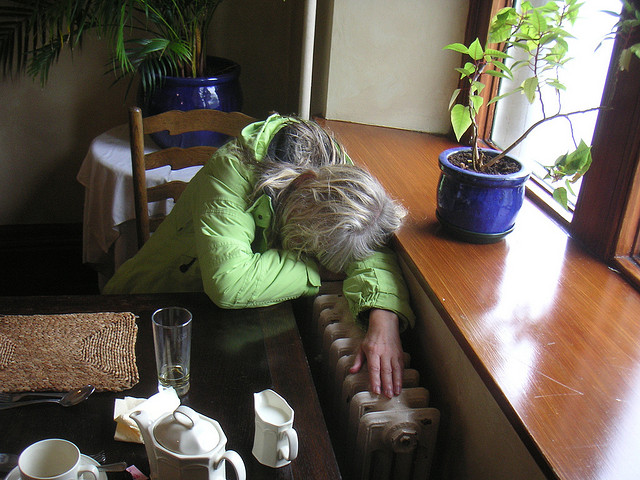 Everyone experiences fatigue—this is a natural response to overexertion or stress.

But for many people in our culture, the unabating experience of fatigue affects their life in a negative and pervasive way. For example, according to one study, fatigue affects more than one-third of people in the workplace. (1) Of those studied to have fatigue in the workplace, 65 percent of them experienced fatigue associated Lost Productive Time (LPT), according to a cross-sectional telephone survey of US workers. (1)

There are many reasons why someone might become fatigued.

From an Ayurvedic perspective, these reasons are simplified into one dynamic, which creates the chemistry of fatigue in the body.

There are two major energies (vatas) in the body. One is called prana vata, which moves up into the head and supports nervous system function, and the other, called apana vata, moves down into the pelvis supporting reproductive, adrenal and eliminative function.

In times of debilitating stress, the apana vata will move up toward the head to support the prana vata and nervous system, leaving the apana vata-fed systems without the energy they require.

If this process is overused, the apana will become depleted and the function of the adrenals, reproduction and elimination will be compromised.

Over time, the depleted apana vata function will call on the prana vata to support reproductive, adrenal and eliminative function, leaving the prana even more depleted.

This borrowing from Peter to pay Paul can drive the body into a deep state of exhaustion.

The Rise of Adrenal Exhaustion

This same process is described in western physiology as the pervasive adrenal exhaustion.

When the adrenals are overstimulated as a result of stress, they will drive the body to make energy in the form of stress-fighting hormones that it doesn’t really have. The adrenals then go in search of energy to borrow, resulting in a typical cascade of energy debt:

If stress persists, the adrenals will stimulate the desire for more sugar in the diet, as this is the brains’ instant source of fuel when stress levels rise. This can be hard on the liver and pancreas, as they will have to produce more insulin to keep excess sugar out of the bloodstream. It can also add blood sugar problems on top of fatigue, and create Advanced Glycation End Products (a type of free radicals) in the blood.

>> Then, when all else fails, the adrenals will try to up-regulate the thyroid to increase metabolic activity with more thyroid hormone, only to exhaust thyroid function over time.

Why Not to Boost Adrenal Function

Without realizing it, many of us go through our day self-medicating our adrenal exhaustion with sugar, caffeine, snacks, chocolate, and energy drinks. Products like 5-Hour Energy and other energy drinks overtly attempt to drive the adrenals to make energy that they just don’t have, ultimately leaving the body more exhausted.

Even many natural health strategies intended to support healthy energy levels include or rely on boosting adrenal function. The catch is that many adrenal boosters are stimulants in disguise – even the natural ones! Ginseng, green tea, and gingko are some common examples.

When we stimulate already over-stimulated adrenals in the effort to drive more energy:

Ayurveda suggests numerous lifestyle measures to help to not further exhaust the body’s reserves. If you are not sure how to do this, I have written many articles on this subject and have even compiled what we call a 28-Day Ayurveda Challenge to help folks experience and easily integrate an Ayurvedic routine into their lives.

Though adding new protocols to your day when you are already exhausted may seem counter-intuitive, these protocols offer the chance to experience life going downstream rather than constantly swimming against the tide.

1. Sun Salutations:A few rounds of this simple yet profoundly effective flow of postures that alternately contract and expand the spine will help boost energy by using the body’s own prana, or life force, to circulate energy rather than tapping the adrenals once again.

2. One Minute Meditation: Using the breath in an intentional way can also help circulate the prana, build energizing pitta—or heat—in the body, and harmonize both sides of the brain for increased energy that still feels peaceful and calm.

3. Avoid Late Meals: Having your last meal at 6:00 p.m. and making it a light one may have you waking up in the morning with more energy than you are used to. If you are on a weight loss plan, skipping supper altogether a couple times a week may also boost energy levels. If you decide to try that, however, make sure that you have a large, balanced and nourishing lunch that day, to get you through the night without hunger pangs.

There are also a handful of herbs that have been used for thousands of years to pay back the debt to all the energy-making sites the adrenals have borrowed from. Here are a few of my favorites:

This is perhaps one of the most well-known adaptogens in herbal medicine. An adaptogen is an herb that supports the body’s ability to cope with the ravages of stress. (5)

When we learn that Ashwagandha has the amazing property of supporting energy production during the day and safeguarding a deep sleep at night, we can understand why it is one of the most well-researched adaptogens in the world.

In one study, Ashwagandha has been shown to support healthy brain cell activity in the presence of oxidizing plaque cells. (2)

Ashwagandha was also found to support healthy levels of acetylcholine, the major brain chemical of the nerve cells that also plays a role in memory and REM sleep, by inhibiting an acetylcholine-degrading enzyme called acetylcholinesterase. (3)

Ashwagandha has also been shown to support healthy thyroid function by increasing the natural production of thyroxine. (4)

This herb has been long understood as the premier brain tonic in Ayurveda, supporting healthy memory, clarity, mood, sleep and longevity. (6) But recent studies are beginning to explain why this herb has been so effective: it has been shown to support the optimal health of the skin of the intestinal tract.(7)

In order for Brahmi to successfully deliver its beneficial nervine effects, the environment in the gut must be perfectly balanced and the proliferation of microbes who produce the brain chemicals responsible for Brahmi’s nervine effects must be healthy. (8). As an adaptogen, much like Ashwagandha, it will offer mental clarity and energy throughout the day, while allowing for a deep nights’ rest.

Brahmi is neither a stimulant nor a sedative—it is a deep rejuvenative herb.

In Ayurveda there is an herb called Shilajit, which is widely known in India as the “Destroyer of Weakness.” It is rich in rare constituents called fulvic and humic acids that the mitochondria use to make energy. So instead of boosting adrenals so they can borrow more energy, Shilajit replenishes the deep energy-making centers of the body, the mitochondria. In one study, Shilajit was able to help the mitochondria convert fat and sugar in the body’s main energy source, ATP. (9)

In many studies, Shilajit was also shown to potentize the effectiveness of CoQ10, actually doubling the CoQ10 levels in the mitochondria: (10)

Historically, Shilajit was used by Himalayan mountain climbers to store the energy needed for climbing at heights above 20,000 feet. Local sherpas to this day take Shilajit before each climb and sell it to climbers to help oxygenate at high altitudes. In Ayurveda, Shilajit is the most highly revered herb in their Materia Medica of over 2,000 herbs. For supporting the health and longevity of the mitochondria, Shilajit should be considered.

…And use them. Using diet, lifestyle and adaptogenic herbs to help pay back the exhaustive debt of stress rather than boosting the adrenals to continue driving stress-fighting hormones is a more sustainable approach to restoring healthy and normal levels of energy.