How a Trans Woman Helped Me Make Peace with My Past. 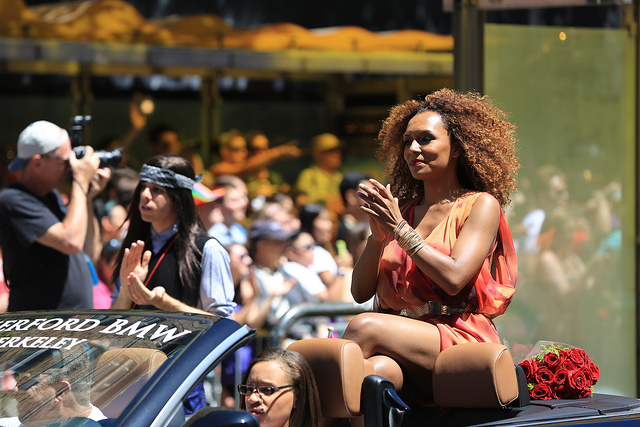 Have you heard of Janet Mock?

She’s after my heart—except, she’s not into women.

I went to see her speak a few nights ago and it may have been the collective consciousness of the 600 or so people crammed into the theatre, but I was enraptured. She spoke my language, she talked about the importance of language, and she shared her message on race and gender issues.

Janet Mock is a writer, TV host, speaker and advocate for trans women’s rights. In 2011, she publicly came out as a trans woman in a Marie Claire article.

In listening to her speak, it was clear she’s a person who has done a lot of work in getting to know herself. I can’t help but admire that quality in a person, especially when coupled with the compassion she exudes.

Those are two qualities I strive to embody in my own life: knowledge of self/Self and compassion.

One of the most striking points she brought up in the evening was something she wrote about in her book Redefining Realness on conditional privilege. It’s the idea that certain platforms of public discourse are made available to people by adhering to a particular set of social norms.

Like how I’m allowed to stay in this café right now because I’m not standing on the table shouting profanities. Now, to be clear, I don’t really have the urge to do so, and nor have I in the past, but I’m granted the privilege of being a patron because I am adopting particular behavior.

My privilege is conditional.

In this case, the conditions include sitting quietly and only getting up for the occasional hot water refill.

In Mock’s case, she has been featured on CNN and many other public platforms because she is a capable public speaker. She talked about how, when she goes back home to visit her mother in Hawaii, she reverts back to speaking the pidgin she grew up with. So instead of bringing this way of communicating with her in every day life and on speaking gigs, she changes her language to adhere to the social norms.

Not everyone needs to change themselves in order to fit into a “successful” life. Some people are born into privilege.

I am not one of those people.

For the first five years of my life my bed was a crib in my parents room and my three older brothers shared the other bedroom. (Is that why I was the last kid? Probably.) I grew up in a household of lack.

Yes, there was abundance, too. We moved out into the country because my grandparents wanted to demolish the house (shack) they gave us for (often) free rent and build their own place. Abundance came in the form of a different kind of space. Like grandiose ceilings of prairie skies as I went for bike rides with my dog, or creative games pushing hay bales in the fields come autumn and the most epic kick-the-can sessions on the sprawling acreage.

But there was lack.

I wanted to take ballet classes, but knew my parents couldn’t afford it. I wanted to wear trendy clothes, but was left with the hand-me-downs of a generous second-cousin. I wanted to confidently participate in paid school outings without worrying spending money on me would ruin my parents. I also wanted to eat any time I was hungry but that didn’t quite happen either.

I wouldn’t change my upbringing because it gave me the gifts of seeking what is truly important in life. I learned the importance of togetherness, how to nurture relationships and get along with people. I learned that all people have value.

Now, as I navigate the world as a woman in her late 20s ready to be “successful” I’m left shaking off those lingering personality aspects that struggle with taking space, with assuming my right to present myself to the world.

Mock spoke about the difference between a child whose family is well off enough to afford professional childcare and one whose isn’t. The child with a paid nanny can expect that someone will be there to devote time and attention to them, to read to them. Another child might have a caregiver who is also struggling to provide attention to other children at the same time. These children will grow up with different expectations of what spaces are available to them as they grow up.

When my father was home from addictively gambling away the grocery money and sitting in front of the hockey game, I would want his attention. He didn’t always want to read to me, so sometimes I’d cry to make him feel guilty enough to do so. (Yeah Dad, the cat’s outta the bag—those tears were often about manipulation.)

I can’t help but think how different my life would be if I grew up with the expectation that my needs had a right to be fulfilled—as all children’s do.

The thing is, this is all in the past. Now, through a lot of yoga and soul-searching, I’m a confident woman who is out in the world creating the life I want for myself.

I sat in that lecture hall with tears glistening in my eyes with renewed determination to do as Mock has done in her life and “push that space.”

She helped me see the implicit challenges from my upbringing I’ve overcome, and that I can move forward with knowledge that we are meant to utilize spaces. Invitations are meant to be sent out and days are meant to be structured in ways that nourish and fulfill.

I know all these things, but it’s nice to be reminded every so often. So thanks, Janet.

Here’s to doing the work.