A Little Quote to Help Us get through the Hard Stuff. Life-altering change is often painful, and it always comes on its own time.

But sometimes life falls out of the sky and into our lap, and the change you need comes from the most unexpected sources in the darkest of times.

One year ago this weekend my father-in-law, Andrew Gilmore, died suddenly in his home in rural Pierce County, Washington. He was 67 and had recently battled diabetes.

My wife and I were preparing to split firewood with my parents when we got the Call That Changed Everything on that Saturday morning. By that Saturday afternoon, she had booked a flight home for the next day and sent a text to her boss that she would be with her family in suburban Seattle for the next week. I would join her for a return trip in December for the memorial service. Heavy emotional times.

Andy was truly a great guy. I can’t say we were extremely close, living 3,000 miles apart, but we saw him every time we visited my mother-in-law and step-father-in-law, and I liked him a lot.

Andy was big and burly, a bus mechanic for King Country Metro and a fiercely pro-union guy. Before that he worked building the Alaska Pipeline. He could come off as a bit intimidating, but once you got past that exterior shell he was a teddy bear.

His sense of humor was wicked, and often born of exasperation.

My mother-in-law, Mary, has a penchant for malapropism (we’ve often threatened to publish a book of her greatest hits called the Mary-onary): once she was tearing the kitchen apart looking for her “spoodle” (spoon + ladle), and once she kept asking Andy if he bought “flowerkraut” at the store. After a few moments of bellowing “What in the hell are you talking about!?” (maybe not quite in those words), Andy figured out that she was asking about cauliflower.

The best came when a piece of metal has hanging off our first beater car. My wife called Andy and described the symptoms. After a few minutes of go-nowhere explanations and more and more questions, Andy lost it and yelled, “Well, Jesus Christ Andrea, hold the phone up to the car so I can figure out what you’re talking about!”

We ended up taking the car into the garage.

Andy’s death came out of nowhere, punching us in the gut with unwanted finality. But in the aftermath, sorting through his affairs, we got a clear picture of a wonderful man with a tremendous heart. Big burly mountain man, union laborer, guy who listened to ‘Zep and ‘Floyd and raced a ’63 Chevelle and rode a Honda: not much there, right? Wrong. We knew it was there, but the depth of his intellectual curiosity was truly revealed after his death.

As a result, I unexpectedly received words of wisdom to change my life.

Andrea and I flew out to Seattle for the wake in mid-December. For the service, we set up a display with a collection of Andy’s mementos: photos, old report cards, union patches, model cars and cans of Gilmore Oil, a card signed by co-workers for his retirement a mere seven months earlier.

He collected many newspaper clippings over the years, and I remember seeing them around his house. Inspirational and humorous quotes, political cartoons, POGO strips, lots of Pot-Shots by Ashleigh Brilliant. I remember standing around the table before the wake, perusing all the clips, when my eye landed on a clip that would resonate the rest of my life.

Guy with an easel leaning against a ladder, with the caption: 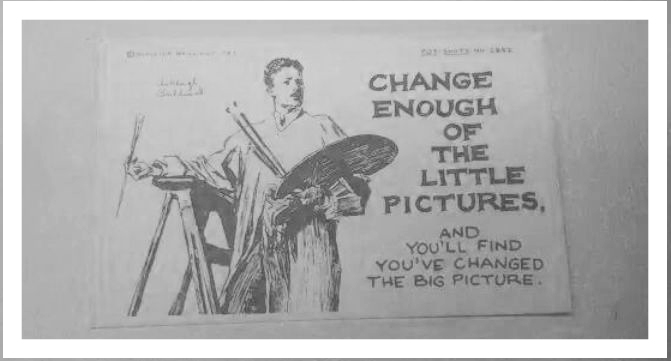 As I’ve written before, life falls out of the sky and into our lap.

On that day in December 2013, as I read that quote at such a horrible time, I was going through spiritual trauma far deeper than merely losing my father-in-law.

Around that time, I was searching for help in quieting my demons. I had just discovered that I carry the HSP (Highly Sensitive Person) trait, and I had also just discovered Mindfulness and Buddhist thought. I was at the beginning of my practice of these concepts, and everything was clicking, but not fully connecting yet.

Seeing that amazing quote, which was important enough to my father-in-law to save and hang on his wall, stuck, because I could plug it into my own life.

I had always worked on changing the little pictures, and as a result, I could see how far I had come. Big picture.

And here was tangible confirmation that my efforts could pay off and had paid off.

I have carried that lesson which my father-in-law passed on to me every day since, and it has served as confirmation of my efforts and inspiration to continue. In a moment where the small picture of loss was all-encompassing, I received a reminder of the importance of the big picture.

And I’m working on it.

“My grandfather kept this quote in his wallet until he died.”

The Quote that Stopped Me in my Tracks & Woke Me Up.

8 Quotes for Wild Ones Lost in the Unknown.

Bonus video: A simple Buddhist tip to get us through rough days. 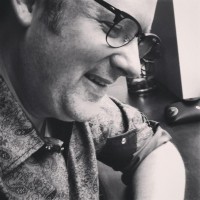