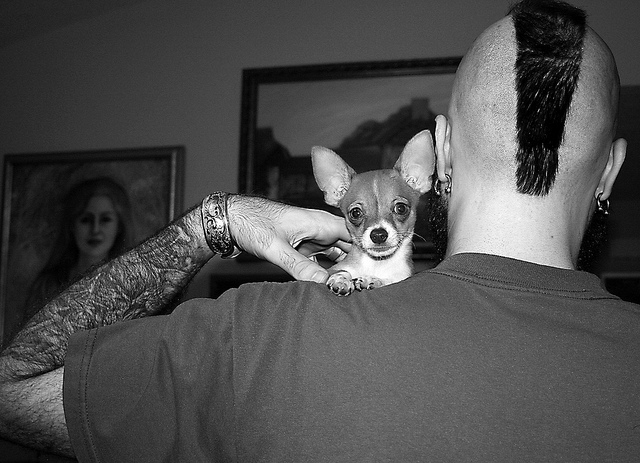 Why women are attracted to bad boys and how to fix that:

“Bad boy” is defined by the Urban Dictionary as:

“A young man who has many characteristics of a naughty boy: he’s independent and willful; he does what he wants when he wants; he doesn’t follow trends, they follow him; he often looks scruffy, but hip; he’s not looking for trouble, but there’s a sense of danger about him. For these reasons and more, he’s irresistible to women. He’s a heartbreaker with five o’clock shadow. Humphrey Bogart was the original badboy.”

James Michael Sama gets into society’s categories and writes:

Traditionally, “bad boys” seem to be those men who don’t treat women well, and despite that, (and some people think, because of that), they tend to attract more women than gentlemen (or “nice guys”) do.

I say there’s more going on here than meets the proverbial eye.

David Deida talks about it when he explains (paraphrasing an audio of his) how firstly, women desire masculine men—men who are predominately on the masculine end of that masculine-to-feminine spectrum.

He gives the example of a woman who is married and where the masculine-feminine polarity has gone wonky in her marriage so that she is most often carrying the masculine energy, and who gets excited and is attracted when she sees the rough, black leather-clad biker gang (the classic, probably over-used, “bad boy” stereotype) ride into town.

He continues about how she may be surprised at this attraction and instantly tries to dismiss that she is attracted to “bad boys” while being “happily” married, but then also can’t quite make herself forget about those bad boys either.

She’s attracted because she craves polarity.

It is only through this polarity that attraction—the spark—happens between people. If she is carrying masculine (or more neutral) energy most of the time, it would take a very strongly masculine man to make her feel feminine again, to create the polarity she craves. It might take a “bad boy.”

Any of my female clients who complain about only attracting passive/feminine men, has to sit through my own story, as I tell her how important it is to look at her own energy first.

As women, we cannot fault men who are too “passive” if we are living from our own masculine energy. Because of course we are only going to attract passive men in that case—or attract men who more easily go to the feminine end of that spectrum when in the presence of masculine energy.

The polarity is always going to instantly happen whether we are conscious of it or not.

There are reasons the Masculine and Feminine are constantly balancing, gifting and polarizing each other. Each needs the other. Like the poles on a magnet, like repels like and opposite poles attract.

And there is no right or wrong place to be on that spectrum, but when a woman is talking about only attracting feminine/passive (read: who don’t initiate things, who don’t take charge) men when she also proclaims to only want masculine men, I always tell her to look at her own energy first.

There is also a belief that “nice guys finish last,” meaning, that women will always be attracted to the bad boys first and foremost. But I think the problem is not about manners; it’s about the polarity.

So to put to rest the idea that women like to be mistreated by “bad boys,” I want to point out that women just want to be with a masculine, take-charge sort of man.

And I also want to point out that that is not going to happen if the woman is already on that masculine, take-charge end of the spectrum.

So the fact that women are attracted to bad boys doesn’t mean they want to be treated badly or are interested in being abused. It means they are in search of masculinity.

And they may be in search of and attracted to strong masculinity because they have, for many reasons, become masculine in order to deal with life. My own masculine energy was something I wore as protection—as the result of an abusive childhood. It was totally an unconscious situation—as it usually is for most folks.

I think the remedy is to find your own comfortable place on that masculine-feminine spectrum—and to also realize you will attract the polar opposite of that. If you are comfortable with both of those ideas, you’ve got nothing to think about.

If, on the other proverbial hand, you are not satisfied with one or both of those ideas, it is time to take a look, not at the other person, but at yourself.

Because you are responsible for, and can only change, yourself.

So ladies, if you want to attract strong, masculine men and you’re disappointed that is not what’s happening, you might want to have a look at your own energy. Where are you on that spectrum?

Rachel Jayne Groover, the author of Powerful and Feminine (a book I highly recommend—as well as her workshops), provides a quiz to see where you fall on that spectrum. She has found that most women with this issue in their life tend to be more neutral rather than actually masculine.

Polarity might not be the only factor in play, but it’s a good place to start, in my (experienced—yikes!) opinion.

Please understand, too, that this energy affects every part of your life and all of your relationships—not just the romantic ones.

Does this mean you may have to take a look at why you are mostly masculine most of the time? Yes. Might it be difficult? It might. And you can do it. You are worth the digging, the time and the work it might take.

You will, most probably, not like some of the things you find out about yourself. The good news, though? Once you’re aware of it, you can change it. Don’t let shame get its claws in you and hold you back.

One of the scariest, most embarrassing and shameful things I found out about my own former, protective, masculine self was how I used to need to emasculate men to keep from feeling so vulnerable and unsafe with them.

Once you become more aware and learn how to find and hold your own spot on that spectrum, you will begin to notice everyone’s energy and begin to recognize where they fall on the spectrum and how it has the potential to affect you.

It becomes possible, then, to make conscious decisions about where you want to be, energy wise, so that you are not instantly pulled out of your comfort zone by someone else’s energy.

You will be able to place yourself anywhere you choose on the spectrum—consciously, responsibly and respectfully—for everyone involved.

This will also keep you from gravitating toward those (very few) men out there who really are bad and who might actually not treat you like the queen/goddess you truly are.

And gentlemen, are you so totally confused and fed up right now with this whole masculine-feminine issue? Can’t say I blame you.

Take heart, though, as James Michael Sama (correctly, in my opinion) writes:

“A lot of men are probably reading this thinking about how complicated it sounds – but I don’t really think it is. I think it’s relatively straightforward: Don’t be a pushover, and don’t be a jerk. Find a middle ground. Keep your pride as a man and also do what it takes to make the woman in your life happy. You are not her servant, and you are not her boss. You are her equal, her teammate, her partner in a relationship; and she needs to be able to see you that way.

“You don’t have to be a bad boy or a nice guy, you can be both. Challenge her, seduce her, empower her. But also love, honor, and value her. That is what she wants.”